The Yarkovsky effect: Pushing asteroids around with sunlight

The Yarkovsky effect is a minuscule push on a small body in space, imparted by nothing more than sunlight.

Would you believe that sunlight has the ability to change the course of asteroids and comets? It can. Consider the example of asteroid Bennu, which made headlines last month when NASA’s OSIRIS-REx spacecraft successfully collected a sample of dust from its surface (the spacecraft is due to return to Earth in 2023). Bennu has been known since at least 2012 to undergo the delicate nudge of what is called the Yarkovsky effect. It’s a minuscule push on an asteroid, imparted by nothing more than sunlight.

The Yarkovsky effect – sometimes called the Yarkovsky-O’Keefe-Radzievskii-Paddack (YORP) effect – happens because, just as on Earth, the side of an asteroid facing the sun is warmed by sunlight. On asteroid Bennu, for example, a single spin takes just 4 hours and 17.8 minutes, so the part of the asteroid’s surface that faces the sun is constantly shifting. As Bennu rotates, it continuously expels heat from its ever-shifting sunlit side. As its surface heats up during the day and cools down at night, Bennu gives off radiation that can act as a sort of mini-thruster.

The animation below shows how sunlight alters the orbit of a rotating asteroid via the Yarkovsky effect.

The Yarkovsky effect also changes the orbit of asteroids. For asteroids that spin in a prograde direction – that is, the asteroid spins in the same direction it’s orbiting – the asteroid gets a push in the direction of its orbital motion. The asteroid speeds up and moves out to a slightly larger orbit.

The opposite happens for an asteroid rotating in a retrograde direction, opposite from its orbital motion. A retrograde rotator gets pushed backwards due to the Yarkovsky effect. It is effectively slowed down and falls towards the sun on an increasingly smaller orbit.

The OSIRIS-REx team explains how this works in the video below:

Between 1999 and 2012 – when a measurement of the Yarkovsky effect for asteroid Bennu was first announced – Bennu had wandered by about 100 miles (160 km) from where it otherwise would have been. The discrepancy is entirely the result of heat radiating from the asteroid’s surface.

Like the proverbial tortoise racing the hare, slow and steady is the way the Yarkovsky effect manifests itself. If you guessed that the thrust imparted by radiation is tiny, you would be right. Asteroid Bennu – 68 million tons of mass, a third of a mile (half a kilometer) wide – is being pushed around by a force equal to, as team member Steven Chesley said in 2012, the weight of three grapes on Earth. That’s about half an ounce (14 grams).

Understanding the evolution of our solar system requires taking into account all the forces at play, no matter how small. If the weight of three grapes can shove an entire asteroid off course by 100 miles over a dozen years, what about over 1,000 years? Or a 100,000? Or a billion? 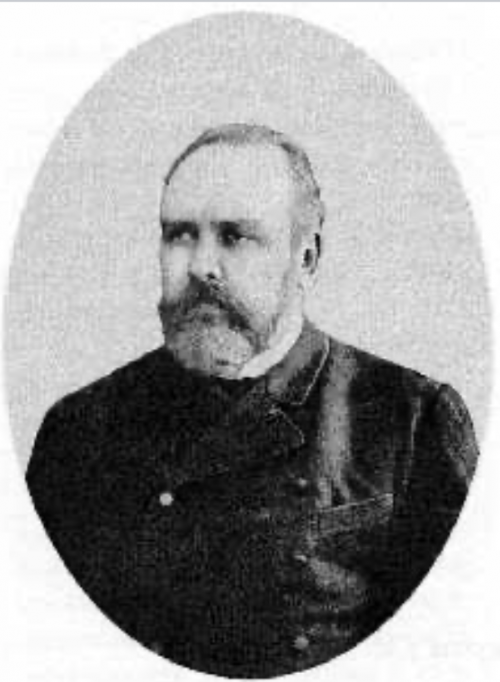 The Yarkovsky effect was first described by a Russian civil engineer named Ivan Yarkovsky around the year 1900. Yarkovsky, born in 1844, worked for the Alexandrovsk railway company for more than 20 years, exploring railroad technology. During that time, he also dabbled in other scientific pursuits. His interest in the motions of the planets led to the publishing of a pamphlet describing the effect that would come to bear his name.

His work would have been lost had it not been rediscovered by Ernst Opik and made widely known in 1951.

In the years since Yarkovsky published his musings, planetary astronomers have come to realize that his effect has most likely dramatically changed entire families of asteroids and played an essential role in the movement of objects from the main asteroid belt to Earth. In fact, without this effect, the Earth would have experienced fewer asteroid impacts over its history. One is left to wonder if any mass extinctions were the result of just half an ounce of pressure on one side of a rock quietly orbiting between Mars and Jupiter.

Astronomy often focuses on the large, the vast, and the highly energetic. But sometimes, very small forces can alter the evolution of an entire planetary system. The Yarkovsky effect is one example. An imbalance in the radiation of heat off an asteroid changes its orbit.

And that change can make the difference between the status quo and mass extinction. 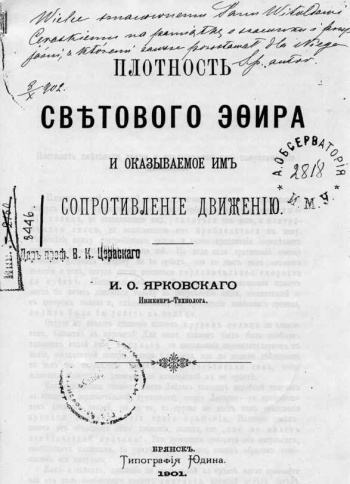 Title page of Ivan Yarkovsky’s pamphlet, privately published in Bryansk, Russia in 1901. This is where the concept of his effect appeared for the first time (although in a context that’s now obsolete; he assumed that ether existed between solar system bodies). Image via Scholarpedia..

Bottom line: An ounce of force from an imbalance in sunlight can steer asteroids into (or out of) Earth-crossing orbits. This is the Yarkovsky effect, a minuscule push on an asteroid, imparted by nothing more than sunlight. Given a long-enough time, the effect can drastically alter the layout of the solar system.