For the 1st time, a visible light explosion from a black hole merger

In recent years, black hole mergers in our universe have been detected via ripples in spacetime known as gravitational waves. Now, for the first time, astronomers believe they’ve observed visible light from a black hole merger, in a peculiar 3-black-hole system. 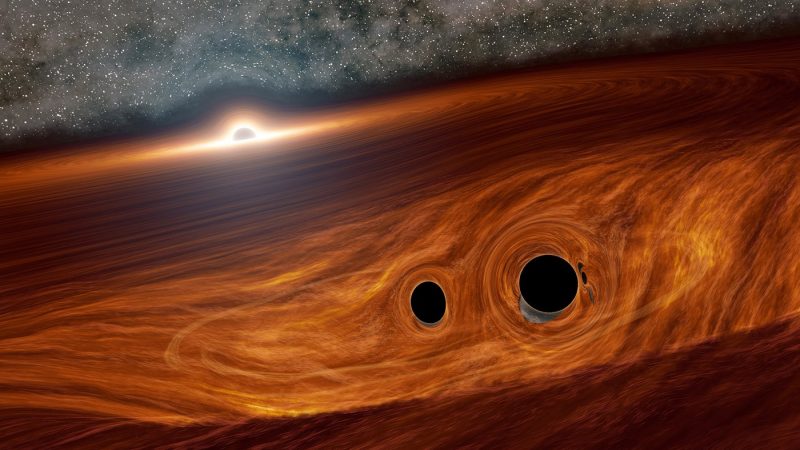 Artist’s concept of a peculiar black hole system, in which 2 small black holes are merging in the disk surrounding a 3rd, supermassive black hole. Astronomers think that, when the 2 smaller holes merged, they sent a newly formed black hole flying through the gaseous disk, disturbing the gas and producing a visible light flare. Image via Caltech/ R. Hurt (IPAC).

Astronomers long believed – and in recent years they’ve observed – that 2 black holes orbiting each other sometimes spiral closer and then merge. Until now, they’ve never seen visible light from such a merger. What they observe are elusive signals from black hole mergers called gravitational waves: ripples in spacetime. Meanwhile, theorists have proposed ways that black hole mergers might explode with visible light. This month, for the first time, astronomers in California announced evidence that they’ve now seen one of these light-producing scenarios.

The new study describing the origin of the light explosion, or flare, was published June 25, 2020, in the peer-reviewed journal Physical Review Letters.

The evidence comes from Caltech’s robotic Zwicky Transient Facility (ZTF), located at Palomar Observatory near San Diego. ZTF’s job is to survey the night sky, capturing a multiplicity of unexpected flares and eruptions, lighting up like cosmic fireflies in the night. On May 21, 2019, the ZTF robot telescope detected a flare generated by a distant active supermassive black hole, or quasar, called J1249+3449. This object is an estimated 12.8 billion light-years away.

Now, more than a year later, astronomers have done the careful analysis, coordination and review needed to say that, yes, these two events – one in visible light, one in gravitational waves – likely spring from the same black hole merger. Matthew Graham of Caltech is lead author of the new research and ZTF project scientist. He said in a statement from Caltech:

This supermassive black hole was burbling along for years before this more abrupt flare.

The flare occurred on the right timescale, and in the right location, to be coincident with the gravitational-wave event. In our study, we conclude that the flare is likely the result of a black hole merger, but we cannot completely rule out other possibilities. 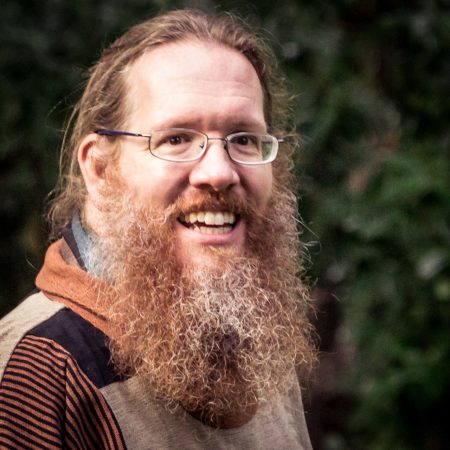 Astronomer Matthew Graham of Caltech is project scientist of the robotic Zwicky Transient Facility and lead author of the new research.

How do two merging black holes erupt with light? Graham and his fellow astronomers believe that two small black holes resided within a disk surrounding a much-larger black hole. A co-author of the new research, Kathleen E. Saavik Ford of the Graduate Center at City University New York (CUNY), explained:

At the center of most galaxies lurks a supermassive black hole. It’s surrounded by a swarm of stars and dead stars, including [other] black holes. These objects swarm like angry bees around the monstrous queen bee at the center. They can briefly find gravitational partners and pair up but usually lose their partners quickly to the mad dance. But in a supermassive black hole’s disk, the flowing gas converts the mosh pit of the swarm to a classical minuet, organizing the black holes so they can pair up. 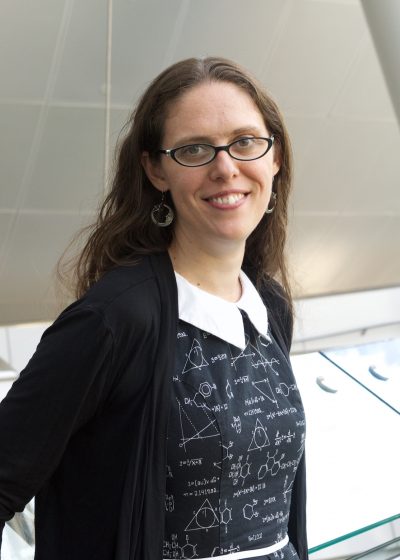 Astrophysicist Kathleen E. Saavik Ford of CUNY is a co-author of the new research.

According to the scenario described by these scientists, once the two smaller black holes merged into a new black hole, that new black hole experienced a “kick” that sent it flying off in a random direction within the gaseous disk of the supermassive black hole. Astronomer Barry McKernan, also of CUNY, said:

It is the reaction of the gas to this speeding bullet [the newly formed black hole] that creates a bright flare, visible with telescopes.

Such a flare is predicted to begin days to weeks after the initial splash of gravitational waves produced during the merger, these astronomers said. Their statement explained:

In this case, ZTF did not catch the event right away, but when the scientists went back and looked through archival ZTF images months later, they found a signal that started days after the May 2019 gravitational-wave event. ZTF observed the flare slowly fade over the period of a month.

The scientists attempted to get a more detailed look at the light of the supermassive black hole, called a spectrum, but by the time they looked, the flare had already faded. A spectrum would have offered more support for the idea that the flare came from merging black holes within the disk of the supermassive black hole. However, the researchers say they were able to largely rule out other possible causes for the observed flare, including a supernova or a tidal disruption event, which occurs when a black hole essentially eats a star.

What is more, the team says it is not likely that the flare came from the usual rumblings of the supermassive black hole, which regularly feeds off its surrounding disk. Using the Catalina Real-Time Transient Survey, led by Caltech, they were able to assess the behavior of the black hole over the past 15 years, and found that its activity was relatively normal until May of 2019, when it suddenly intensified.

Supermassive black holes like this one have flares all the time. They are not quiet objects, but the timing, size, and location of this flare was spectacular

The reason looking for flares like this is so important is that it helps enormously with astrophysics and cosmology questions. If we can do this again and detect light from the mergers of other black holes, then we can nail down the homes of these black holes and learn more about their origins.

… producing another flash of light that ZTF should be able to see. 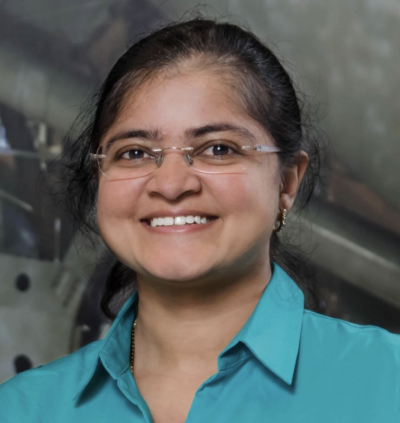 Bottom line: In recent years, black hole mergers in our universe have been detected via ripples in spacetime known as gravitational waves. Now, for the first time, astronomers believe they’ve observed visible light from a black hole merger, in a peculiar 3-black-hole system.