They’re called trans-Neptunian objects, or TNOs. Astronomers analyzed data from the Dark Energy Survey – which just completed 6 years of observations – to find over 100 new little worlds in the cold outer reaches of our solar system.

Computer-generated concept of the rotation of a trans-Neptunian object, in this case the small world we call Haumea. This little world is egg-shaped because of its fast rotation; its “day” is just under 4 hours long. Meanwhile, its “year” – or orbit around the sun – lasts about 285 Earth-years. Haumea is also known to have a ring and 2 tiny moons. Image via Stephanie Hoover/ Wikimedia Commons.

Objects like Haumea, depicted above, are minor planets, called trans-Neptunian objects, or TNOs. They orbit in the cold outer reaches of our solar system, out beyond Neptune, taking hundreds of years to orbit the sun once. There are estimated to be perhaps 70,000 TNOs, each at least 60 miles (100 km) across. This month, astronomers at the University of Pennsylvania announced that they’ve successfully pinpointed over 100 new TNOs. As with all known planets, moons and minor planets in our solar system, each one of these little worlds is sure to be unique. The new study also outlines a new approach for finding even more of these far-off worlds.

The updated peer-reviewed findings were published in The Astrophysical Journal Supplement Series on March 10, 2020.

The results come from data obtained by the Dark Energy Survey (DES), which just completed six years of observations this past January. DES’s focus, as the name implies, is to study dark energy, but it is also well-suited to finding TNOs and other smaller solar system objects beyond Neptune. DES typically looks at galaxies and supernovas, so the researchers needed to devise a new way to track movements of much smaller and closer objects. Grad student Pedro Bernardinelli, who led the study, said in a statement:

Dedicated TNO surveys have a way of seeing the object move, and it’s easy to track them down. One of the key things we did in this paper was figure out a way to recover those movements. 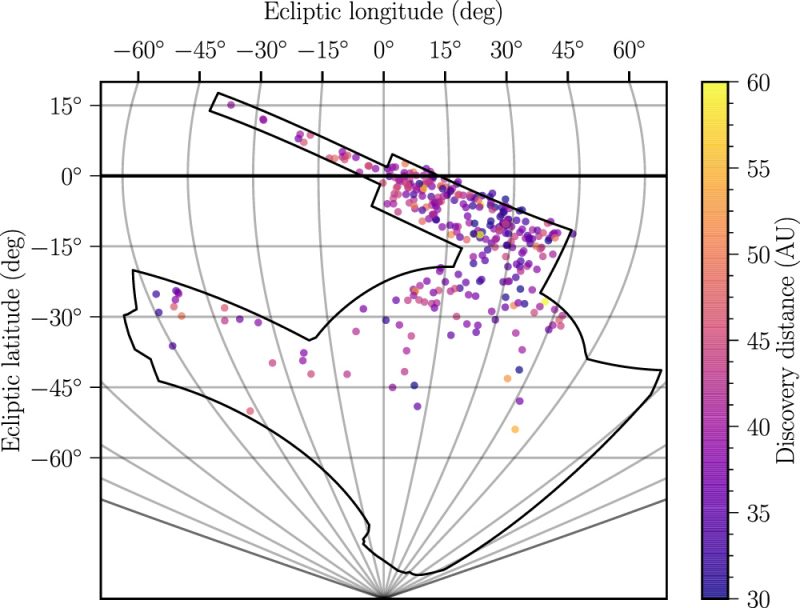 Locations of the new TNOs discovered in the DES dataset from the first four years. The outline shows DES’s search range and the color of each dot shows how far away the object is in astronomical units (one AU is the sun-Earth distance, 93 million miles or 150 million km). Two of the detections were more than 90 AU, over 8 billion miles (13 billion km) away. Image via Pedro Bernardinelli/ Penn Today.

The number of TNOs you can find depends on how much of the sky you look at and what’s the faintest thing you can find.

So how did the researchers find all of these TNOs?

Images from the first four years of DES data contained about 7 billion “dots” that are all of the possible objects able to be detected by the DES software. But many of those would be data errors or larger objects like stars, supernovas or galaxies, which are actually much farther away. Bernardinelli removed any objects that were visible in the same locations on multiple nights, narrowing down the list to about 22 million candidates. He then looked at those objects to see if any of them formed pairs or triplets. That would help the researchers see where those objects might appear on subsequent nights.

That process whittled down the list of candidates much further still, down to about 400 objects. Bernardinelli said:

We have this list of candidates, and then we have to make sure that our candidates are actually real things. 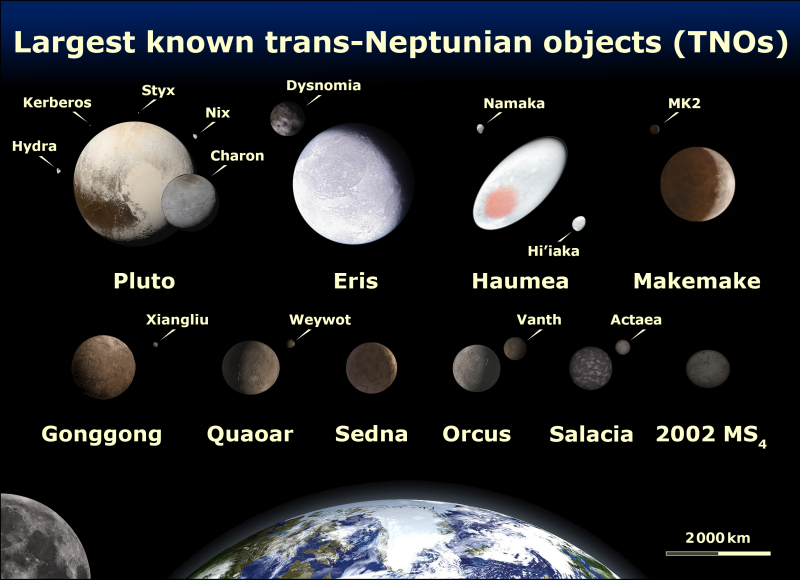 Size comparison of the largest TNOs, including Pluto. Image via Lexicon/ Wikipedia.

Some of those candidates might still not be actual TNOs, however. So how to figure out which ones are, if any?

The researchers looked for additional images of the objects of interest. According to Bernstein:

Say we found something on six different nights. For TNOs that are there, we actually pointed at them for 25 different nights. That means there’s images where that object should be, but it didn’t make it through the first step of being called a dot.

Another method to ferret out any real TNOs was to stack the images, creating a sharper view. This helped to further sort out real objects from false ones. Bernardinelli said:

The most difficult part was trying to make sure that we were finding what we were supposed to find.

In the end, 316 confirmed TNOs were found in the DES data. Of those, 145 are new objects, not previously discovered. These TNOs range from 30 to 90 times the distance of Earth from the sun. By comparison, Pluto, the best-known TNO (and dwarf planet), is 40 times that distance. 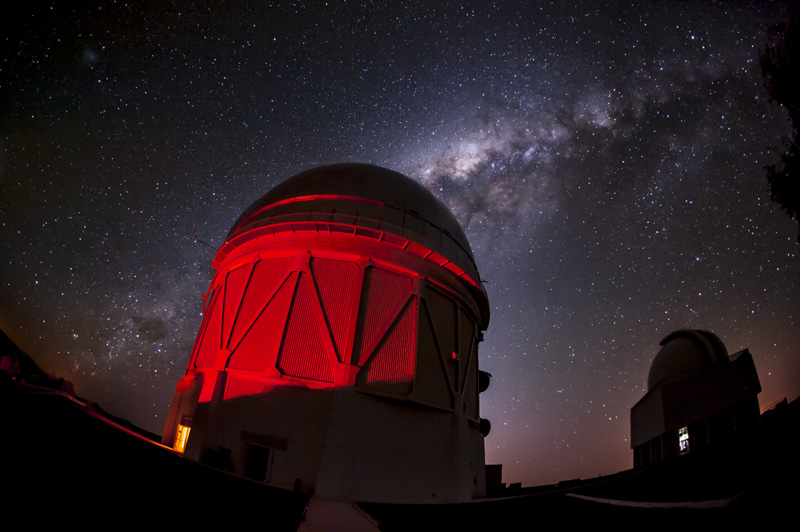 Finding over 300 TNOs overall is impressive, especially for a survey that isn’t even intended to look for them as a primary goal. The researchers think that as many as 500 may be found in the DES data once they rerun their analysis on the entire dataset. Also, the same techniques can now be used in additional astronomical surveys, such as by the new Vera C. Rubin Observatory. Bernardinelli said:

Many of the programs we’ve developed can be easily applied to any other large datasets, such as what the Rubin Observatory will produce.

These kinds of datasets could even help scientists finally find the long-sought-after Planet Nine, a hypothetical giant planet about the size of Neptune that may orbit the sun in the extreme outer fringes of the star system, much farther than Pluto. By studying the orbits of additional newly-found TNOs, researchers might finally be able to determine Planet Nine’s location, if it does indeed exist. As Bernstein said:

There are lots of ideas about giant planets that used to be in the solar system and aren’t there anymore, or planets that are far away and massive but too faint for us to have noticed yet. Making the catalog is the fun discovery part. Then when you create this resource, you can compare what you did find to what somebody’s theory said you should find. 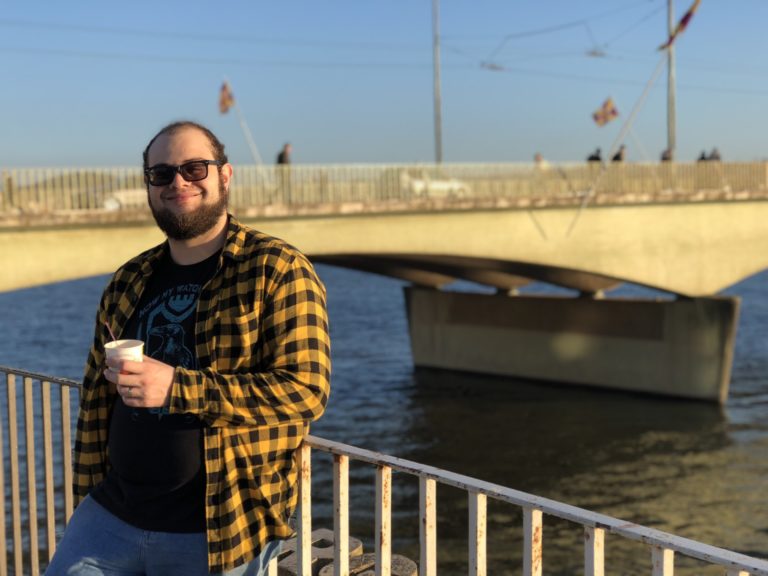 Pedro Bernardinelli at University of Pennsylvania, who led the new TNOs study. Image via The Dark Energy Survey.

Even if Planet Nine isn’t found, however, the datasets of these intriguing little worlds will provide a wealth of new information about how they – and other planets, moons, asteroids and comets – first formed in the early history of our solar system.