A new study concludes that a large, as-yet-unknown Planet Nine – an estimated 4 times the size of Earth and 10 times its mass – is influencing the behavior of an oddball object in the outer solar system. 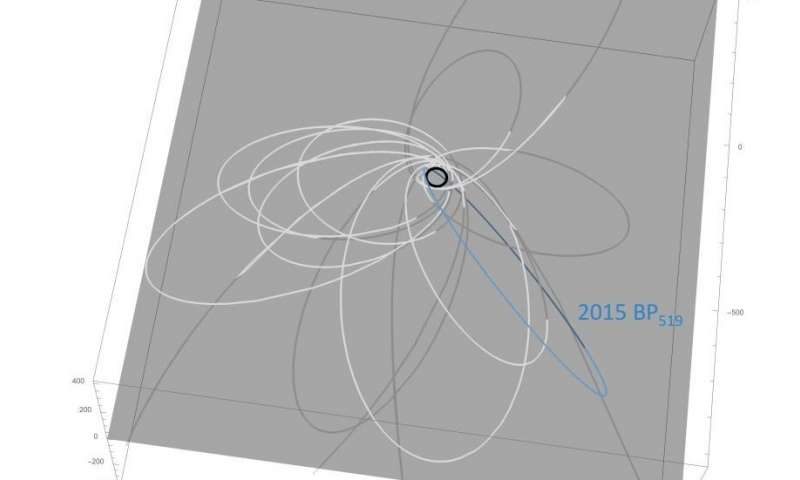 Diagram depicting the orbit of 2015 BP519 (Caju), which has the highest inclination of any extreme trans-Neptunian object discovered to date. Its unusual perpendicular orbit may be evidence for Planet Nine. Image via Phys.Org.

Is there a ninth major planet lurking in the outer reaches of our solar system? This question has become one of the most hotly debated in planetary science. The idea of a large, unknown Planet Nine residing so far from the sun that it hasn’t yet been discovered is certainly tantalizing. So far, there’ve been hints as to its existence, but no confirmation yet. We might be getting closer to finding it, however. Last week, an international team of researchers presented additional evidence, detailed in a new study, suggesting that Planet Nine is influencing the behavior of an oddball object – 2015 BP519 (aka Caju) – in the outer solar system.

Astronomers at Caltech had previously calculated the likely existence of a large ninth planet (sorry, Pluto) in the outer fringes of the solar system, based on the orbits of smaller icy objects. Their orbits were being perturbed by the gravitational influence of … something.

According to the astronomers’ calculations, the as-yet-undiscovered planet should be about four times the size of Earth and 10 times its mass. That would make it similar to super-Earth exoplanets found orbiting other stars. And that would be interesting, since many super-Earths have now been discovered, although there were none to be seen in our own solar system. But maybe there is one after all, so far from the sun that it has remained hidden.

Such a discovery would be very exciting, since super-Earths are larger than Earth but smaller than Uranus or Neptune, different from anything else in our solar system. If a large Planet Nine is there, it is very far away, much farther than Pluto. If it exists, it likely takes about 10,000 to 20,000 years to complete one orbit around the sun. 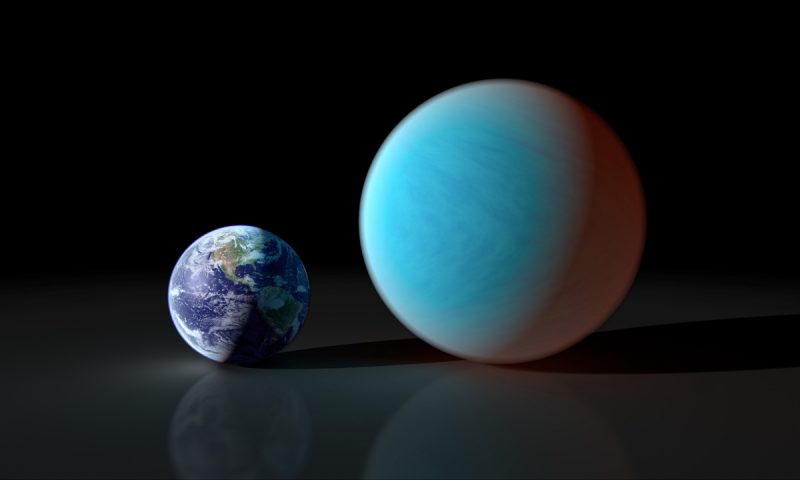 Planet Nine may be a super-Earth, a type of exoplanet found orbiting many stars. They are rocky and larger than Earth, but smaller than Uranus or Neptune. Image via NASA/JPL.

Astronomers first discovered 2015 BP519 (Caju) three years ago. It is a trans-Neptunian object (TNO), which, generally speaking, are minor planets orbiting the sun beyond the orbit of Neptune. Caju is one of only a dozen or so known objects that are categorized as extreme trans-Neptunian objects (ETNOs). Such objects have a semi-major axis greater than 150 astronomical units (AU) and a perihelion – closest point to the sun – greater than 30 AU. Caju’s estimated diameter is 248-434 miles (400-700 km), making it a potential dwarf planet. So it is a very interesting object.

What’s more, since its discovery, further analysis has shown that Caju has an unusual orbit, which lies almost perpendicular to all the known planets. In fact, Caju has the highest inclination of any TNO discovered so far.

Amazingly, just such an object had been predicted by computer models performed by the team searching for Planet Nine. Caltech astronomer Mike Brown, who wasn’t part of the new study, but who is active in Planet Nine research, told PopSci.com on May 22, 2018:

Thus Caju adds to a growing body of evidence for the elusive Planet Nine, which – if really there – still remains out of sight for astronomers. Astronomer Konstantin Batygin – who, along with Brown, first gave Planet Nine a name, size and distance – told Space.com on May 21 that, as of October 2017, there were at least five lines of evidence pointing to Planet Nine’s existence. Earlier, in 2017, astronomers had found evidence that 22 other TNOs seemed to have their orbits perturbed by another large unseen planet. Batygin said:

If you were to remove this explanation and imagine Planet Nine does not exist, then you generate more problems than you solve. All of a sudden, you have five different puzzles, and you must come up with five different theories to explain them. 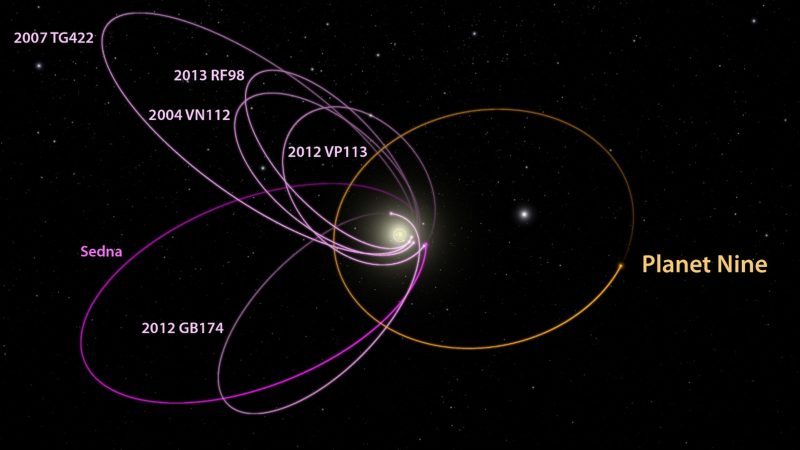 Illustration showing the hypothesized orbit of Planet Nine along with the known orbits of several TNOs. Image via R. Hurt/JPL-Caltech.

Bottom line: While Planet Nine still hasn’t been confirmed, the evidence is growing that just maybe, an as-yet-unseen large planet does indeed prowl the desolate outer fringes of our solar system.

Source: Discovery and Dynamical Analysis of an Extreme Trans-Neptunian Object with a High Orbital Inclination