Will you see the young moon and Mars? 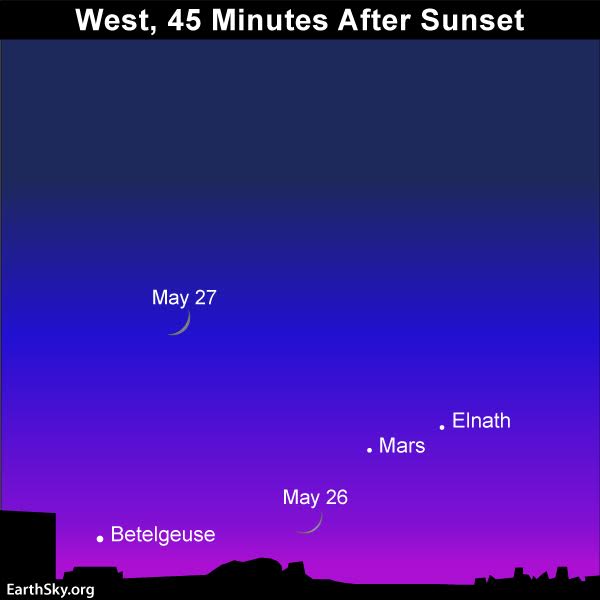 Tonight – May 26, 2017 – will you be able to catch the young crescent moon and the red planet Mars low in the west after sunset? And will Muslim moon spotters in the Americas see this moon, which marks the beginning of Ramadan? Those in the Americas have a better chance of seeing this young moon on May 26 than those in the Middle East, or Europe, or Africa. Follow the links below to learn more.

Will you see Mars and the moon on May 26?

Will moon spotters in the Americas see the Ramadan moon on May 26?

Will you see Mars and the moon on May 26? People in the Americas will have an easier time seeing the young moon on May 26, because, as it orbits Earth, the moon will have had more hours to distance itself from the sun by the time sunset comes to the Americas. The moon will be over a day old at sunset May 26, as seen from both North and South America. This young moon could well be visible in the west after sunset.

Generally speaking, a moon over a day old may be seen as a whisker-thin crescent but only briefly after sunset. The moon and Mars will be very near the sunset glare. They’ll both disappear beneath the western horizon before it gets good and dark. You might need binoculars to see Mars (or possibly the young moon).

Mars has had a long run in our evening sky. Remember a year ago when it was relatively near Earth? A year ago, Mars was brighter than it had been in 10 years. Now Mars is faint and far across the solar system. Earth is about to turn the corner ahead of Mars in orbit, and soon we won’t see the planet at all because it’ll be behind the sun. Mars will reappear in the east before dawn around September 2017. It’ll then settle in for a long, dull time of appearing before dawn throughout September, October, November and December. In 2018, it’ll brighten suddenly and become spectacularly bright! That’s because Earth will be passing between the sun and Mars again, something we do every other year. In 2018, Mars will be closer to us than it’s been since 2003. Worth the wait!

So watch for Mars, and say goodbye to it if you can. This sunset calendar might help.

Will moon spotters in the Americas see the Ramadan moon on May 26? This young moon is important to Muslim culture. The return of this young moon to the evening sky marks the beginning of Ramadan, which is the ninth month in the Muslim lunar calendar – the holiest month for Muslims – and a time of daylight fasting. In 2017, that young moon sighting for Middle Eastern countries is expected for May 27 or 28. But, for the Americas, that young moon sighting could come on May 26. Go back up above and read the section on the moon and Mars to learn more.

Bottom line: Tonight – May 26, 2017 – we’re wondering how many people will catch the young moon and/or the moon and Mars after sunset. If you do, let us know in the comments below!

Thank you! Your submission has been received!
Oops! Something went wrong while submitting the form.
END_OF_DOCUMENT_TOKEN_TO_BE_REPLACED