Will you see a young moon tonight? 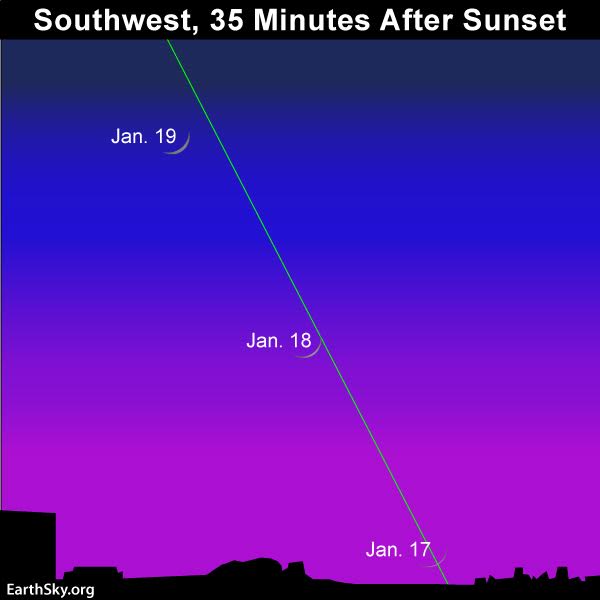 Tonight – January 17, 2018 – you might or might not see a young moon, a very slim and extremely pale crescent moon close to the sunset glare. This exceedingly thin young moon on January 17 might be faintly visible, very low in the west shortly after sunset, especially for those in the Americas or on Pacific Islands. Your calendar might say that moon comes on January 17 at 2:17 UTC (translate UTC to your time zone). For us at North American and U.S. time zones, that time translates to January 16 at:

In other words, for us in the Americas, new moon happened on January 16. And that means that – after sunset on January 17 – it might be possible to spot the returning crescent.

At every new moon, the moon is more or less between the Earth and sun for that monthly orbit of the moon. New moon is when our companion world officially transitions from the morning to the evening sky.

Why are the Americas favored for seeing the young moon on January 17? Only because – as Earth spins under the sky on January 17 – the moon will be moving away from the Earth-sun line. We in the Americas have a chance to see the young moon on this date because – for us – the moon will be farther from the Earth-sun line after sunset than it will for, say, Europe, Africa, or Asia.

To see it, you’ll need an unobstructed horizon in the direction of sunset. Start looking as soon as the sun goes down. Binoculars will help you spot it. So will a sky almanac, which can give you the sunset and moonset times for your sky.

For the rest of the world, the youngest visible moon will likely come on January 18.

Bottom line: The young moon will be tough to see low in the western twilight after sunset on January 17, 2018. You might see it, if you’re in the Americas, or on a Pacific island. If you miss it, look on the following evenings. Each evening, a wider crescent will appear higher up in the sky and stay out longer after sunset.

Thank you! Your submission has been received!
Oops! Something went wrong while submitting the form.
END_OF_DOCUMENT_TOKEN_TO_BE_REPLACED

What’s a Blue Moon, and when’s the next one?