Bright moon close to Spica on May 17 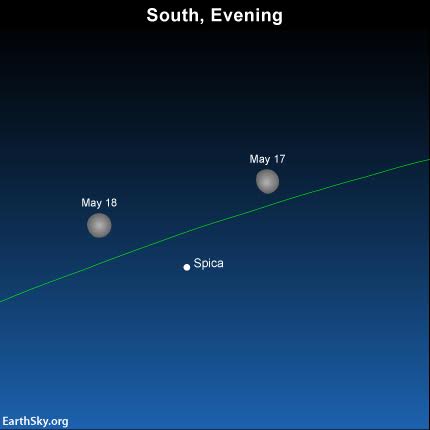 And the ecliptic marks the central line of the Zodiac in our sky – sometimes called the Pathway of Animals for the constellations that lie along its path. The constellations of the Zodiac make up the narrow band of the starry sky through which the sun, moon and planets all travel. Practiced stargazers often refer to Spica because it’s a bright star of the Zodiac.

The sun, moon and planets move along the Zodiac, and the star Spica lies within the Zodiac. Thus the moon passes Spica every month, and planets routinely appear near Spica in predictable cycles as well. That’s also true for other Zodiac stars, such as Antares or Regulus.

On these May and June 2016 evenings, note the other very brilliant starlike point of light much higher up in the sky as soon as darkness falls: Jupiter.

In 2016, Jupiter shines fairly close to the bright Zodiac star Regulus, brightest light in the constellation Leo the Lion and sometimes called the Lion’s Heart.

The moon passes close to the Zodiac stars Regulus, Spica and Antares once a month, and the planets pass by these zodiacal stars in predictable cycles. At present, Jupiter is seen in the vicinity of Regulus, while Mars and Jupiter shine the neighborhood of Antares.

So the ecliptic on the above sky chart, and on many of our sky charts, highlights the sun’s annual path through the constellations of the Zodiac. Of course, the supposed movement of the sun in front of the backdrop stars is really an illusion, which fooled many (but not all) ancient astronomers. We now understand that the sun’s apparent motion along the ecliptic is really caused by our planet Earth’s own movement in orbit around the sun.

Practiced stargazers use the ecliptic – or the larger Zodiac of stars surrounding it – to find the planets, and you can, too. Tonight, try using key Zodiac stars such as Regulus, Spica and Antares to follow the graceful arc of the ecliptic on the sky’s dome.

By the way, the moon moves much more rapidly than the planets do through the constellations of the Zodiac. In fact, the moon will pair up with Mars in several more days, on or near May 20.

Bottom line: As darkness falls on May 17 and 18, 2016, look for the bright waxing gibbous moon to shine close to Spica, the brightest star in the constellation Virgo the Maiden.

Thank you! Your submission has been received!
Oops! Something went wrong while submitting the form.
END_OF_DOCUMENT_TOKEN_TO_BE_REPLACED