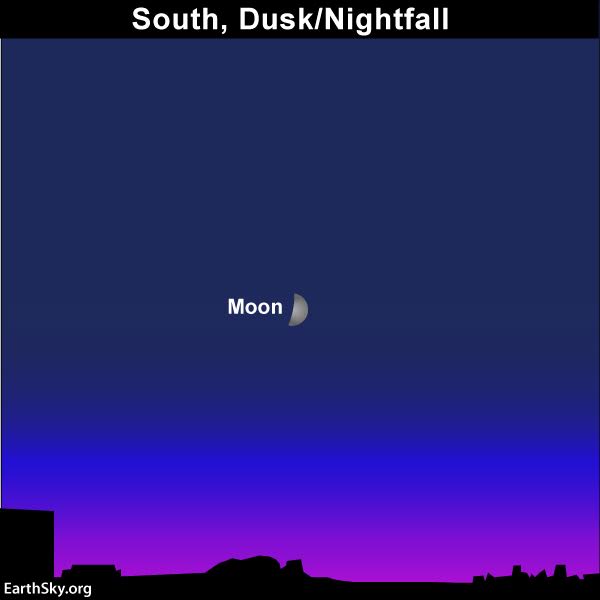 Tonight – October 26, 2017 – the moon is a fat waxing crescent in the evening sky, as seen from around the globe. From northerly latitudes at nightfall, in the coming evenings, you’ll see the moon riding low in the sky, beneath the famous Summer Triangle asterism. Meanwhile, south of the equator, the moon appears high in the sky and above the “upside-down” Summer Triangle.

Why are the evening crescent and the first quarter moon always so low in the autumn evening sky?

This moon phase is low in the evening sky in autumn because the ecliptic, or pathway of the moon and planets, appears lowest in the sky on autumn evenings. Of course, the moon and the ecliptic don’t get all that low in the sky as viewed from the tropics. But if you live at mid-temperate or higher latitudes (places farther from the equator and closer to the poles), then the lowness of the evening crescent and first quarter moon in autumn becomes quite apparent.

Be mindful that autumn comes at opposite times of year for the Northern and Southern Hemispheres. If you’re in the Southern Hemisphere now, then take everything we’ve just said and apply it to the months of March and April! And know that in October – instead of riding low in the sky – your springtime evening crescent and first quarter moon ride high in the sky at nightfall.

On spring evenings, the ecliptic swings way high in the sky. In springtime, from either the Northern or Southern Hemisphere, the evening crescent moon travels almost straight up from the sunset point from day to day, and the first quarter moon shines close to overhead at dusk and nightfall.

Tonight – on October 26, 2017 – the autumn evening crescent sits rather low in the sky at nightfall as seen from northerly latitudes.

Time of moonset in your sky

Bottom line: This week’s crescent moon is waxing toward first quarter phase on October 27, 2017. This post talks about why the first quarter moon in October appears low in the autumn sky, and high in the spring sky.

Thank you! Your submission has been received!
Oops! Something went wrong while submitting the form.
END_OF_DOCUMENT_TOKEN_TO_BE_REPLACED