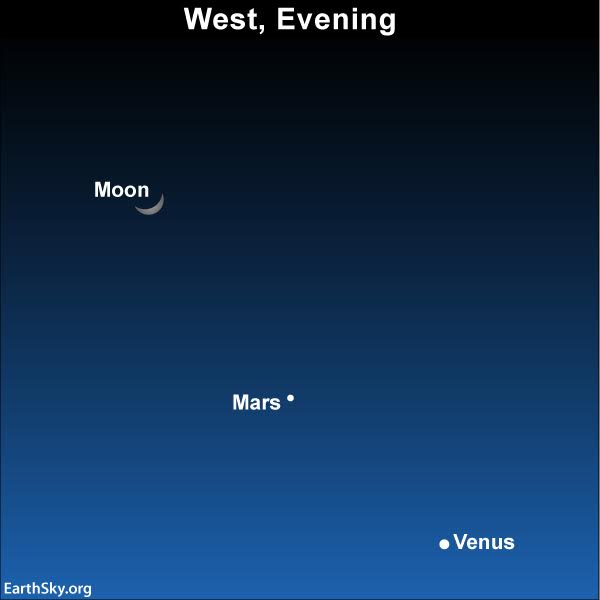 Tonight – March 2, 2017 – look westward at dusk to spot the brilliant planet Venus beneath the waxing crescent moon. Venus, the sky’s most brilliant planet, also starts its retrograde or westward movement in front of the stars of the zodiac on this date. And so a transition begins, which will end only after Venus has left the western evening sky and appears in the east before sunrise.

Venus’ retrograde or westward motion in front of the stars will end on April 13. Roughly midway through this retrograde – on March 25 – Venus will swing to what astronomers call inferior conjunction. On that day, Venus will be passing more or less between the Earth and sun in its smaller, faster orbit. At the same time, this inferior planet will be transitioning from the evening to morning sky.

So watch for Venus tonight shortly after sunset. Then, as dusk turns into darkness, look for the red planet Mars in between the waxing crescent moon and Venus. Be sure to look for Venus and Mars soon after sunset, before they follow the sun beneath the horizon by early-to-mid evening. These recommended almanacs can give you setting times for Venus and Mars in your sky.

Day by day now, Venus is dropping toward the setting sun. Unless you are a very careful observer, it’ll disappear from your evening sky sometime around the March 20 equinox. However, these next several weeks present an opportune time for observing a waning crescent Venus through the telescope. Believe it or not, a twilight sky is much better than a nighttime sky for getting a crisp, sharp view of Venus’s changing phases. Aim your telescope at Venus as soon as you see it after sunset. You might even be able to tell with binoculars that Venus is something other than completely round.

As Venus has approached Earth in its smaller orbit around the sun, its phase has waned (shrunk) yet its disk size has increased. That is, its day side has turned increasingly away from us, while the distance between us and Venus has become smaller. Click here to find out Venus’s present phase and disk size (or its phase and disk size for any chosen date).

Because Venus will pass 8o north of the moon at this particular inferior conjunction, residents at northerly latitudes will have a chance to see Venus in both the evening and morning sky for a few to several days, starting around March 20, 2017.

Bottom line: Look westward on the evening of March 2, 2017 to spot Venus beneath the waxing crescent moon. Venus’ retrograde motion also begins on this date. Watch this world’s rapid descent toward the setting sun over the next few weeks.

Thank you! Your submission has been received!
Oops! Something went wrong while submitting the form.
END_OF_DOCUMENT_TOKEN_TO_BE_REPLACED