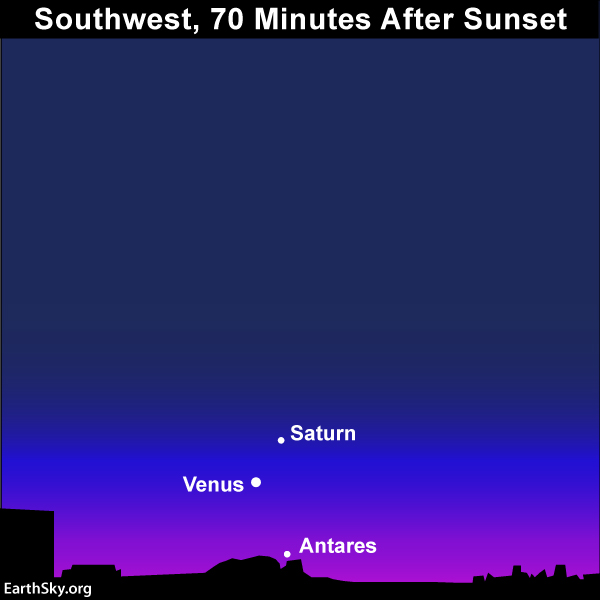 Tonight – October 30, 2016 – look for dazzling Venus, the brightest of planets, in the sunset direction some 20 to 30 minutes (or less) after sundown. Then, as dusk ebbs toward nighttime, look for the planet Saturn to join up with Venus in the darkening sky. When will Saturn appear? That’ll depend on your location on the globe and your sky conditions. Try looking within an hour after sunset, and, if you don’t see Saturn, try looking again until Venus sets.

At present, these two worlds are only 3o apart – approximately the width of your thumb at an arm length. Their conjunction comes on today’s date (October 30) at about 19 UTC … but don’t think you have to look at that particular time. In fact, for a few days, Venus and Saturn lodge close enough together on the sky’s dome to fit into a single binocular field of view.

So, if you see Venus but not Saturn, aim binoculars at Venus to glimpse nearby Saturn.

Although Saturn is as bright as the sky’s brightest stars, it pales next to Venus, the third-brightest celestial body after the sun and moon. Venus shines some 65 times more brilliantly than Saturn and 100 times more brilliantly than the star Antares, which is near the two planets on our sky’s dome. From northerly latitudes, it’ll be difficult to spot Antares because this star sits close to the horizon at sundown and sets so soon after sunset.

The Southern Hemisphere has the advantage, because all three celestial beauties – Venus, Saturn and Antares – stay out longer after nightfall than at comparable latitudes in the Northern Hemisphere.

After tonight, Venus will be climbing away from the sunset glare, while Saturn (and Antares) will be falling toward it.

By the way … are you unfamiliar with the word conjunction? It just means that – on October 30 – Saturn and Venus have the same right ascension on an imaginary grid on our sky’s dome.

Right ascension, to astronomers, is like longitude to geographers.

Bottom line: While the time is at hand, see the close pairing of Venus and Saturn as darkness falls in late October 2016. Their conjunction comes on October 30.

Thank you! Your submission has been received!
Oops! Something went wrong while submitting the form.
END_OF_DOCUMENT_TOKEN_TO_BE_REPLACED