Tonight’s moon lies in direction of our galaxy’s center 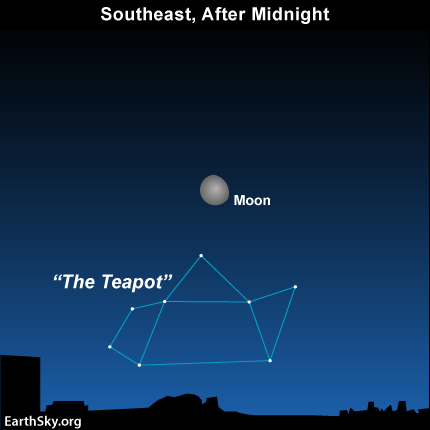 The full moon only happened a few days ago, so the moon tonight will still look plenty bright as it shines from late night until dawn. At mid-northern latitudes in North America, the moon rises into the southeast sky about two and one-half hours after sunset, in a waning gibbous phase. Tonight’s moon is located in the direction toward the center of our Milky Way galaxy. So as you gaze at tonight’s moon, you can imagine gazing toward our galaxy’s heart.

Teapot of Sagittarius: In the direction of galaxy’s center

Sagittarius is easy to recognize – assuming you have a dark-enough sky – because it contains a recognizable pattern, or asterism, known as The Teapot. You probably won’t make out the Teapot tonight because of the lunar glare. But if you anchor yourself among some landmarks (say, a pair of trees on the horizon), and come back a few nights from now at the same time you looked tonight, you will be able to pick out the Teapot pattern.

By August, Sagittarius and its Teapot pattern will be visible immediately after sunset. In a dark sky, you’ll see that the Teapot lies in the thickest part of the starry band of the Milky Way on our sky’s dome. Why is the region behind Sagittarius so rich with stars? Because it is located toward the galaxy’s center, which is more densely packed with stars than its outer realms.

By the way, you can look to the north (or left) of the rising moon this evening for the three brilliant stars of the Summer Triangle: Vega, Deneb, and Altair. Here is a chart. When the moon drops out of the region of the sky in a few more days, try star-hopping to the Teapot from the Summer Triangle. Simply draw a line from Deneb through Altair – descending about twice the Deneb/Altair distance – to land on the Teapot.

Bottom line: The moon on May 8 is in front of the constellation Sagittarius, which contains a recognizable star pattern called The Teapot. This pattern will be fully up above the southeastern horizon, with the moon sitting atop the Teapot’s lid, an hour or so after tonight’s moon rises. So go out in late night tonight, and watch for the moon. Stretch your imagination toward the Milky Way’s Center. Then come back to this same spot, at the same time, again in a night or two to locate the Teapot.

Vega is the Harp Star

Thank you! Your submission has been received!
Oops! Something went wrong while submitting the form.
END_OF_DOCUMENT_TOKEN_TO_BE_REPLACED