Watch these 3 planets on June evenings 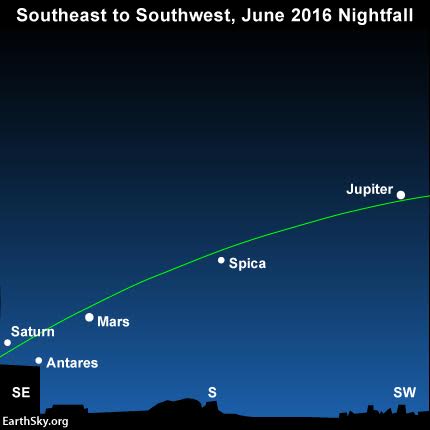 Tonight – June 1, 2016 – and throughout this month, watch for three planets in the evening sky. Mars, Jupiter and Saturn adorn the June 2016 sky, all month long.

Look first for the king planet Jupiter, the brightest starlike object in the June evening sky. It beams quite high up at dusk and nightfall. From northerly latitudes in the Northern Hemisphere, Jupiter appears in the southwest sky at nightfall. From southerly latitudes in the Southern Hemisphere, Jupiter is found in the northern sky as darkness falls.

For all of us, Jupiter sets in the west quite late, after the midnight hour.

As seen from around the world, Mars and Saturn sit very low the southeast sky at nightfall. If you have obstructions along your eastern horizon, you might have to wait an hour or so after darkness falls before seeing these two worlds shining quite close together.

Fortunately, you have almost all night long to view Mars and Saturn, which travel westward across the night sky from dusk until dawn.

You can distinguish Mars from Saturn because Mars is, by far, the more brilliant of these two bright worlds. Mars ranks as the second-brightest starlike object to light up the evening sky, after Jupiter.

Although you could possibly confuse the star Antares for Saturn, you can differentiate Saturn from Antares by color. Antares displays a ruddy hue while Saturn appears golden.

Best of all, Mars was closest to Earth for the year on May 30, and Saturn will be at its closest on June 3, so these two worlds will be especially bright in the June evening sky.

The other two bright planets – Mercury and Venus – are nowhere to be found in the June 2016 evening sky. If you live in the Southern Hemisphere, you can view Mercury in the east before morning dawn for the next several weeks. In the Northern Hemisphere, Mercury sits low in the glare of twilight and is hard to spot in the June morning sky.

In an ironic twist, Venus – the brightest planet of them all – is the only bright planet (Mercury, Venus, Mars, Jupiter and Saturn) that can’t be seen at all this month. Venus hides in the glare of the sun all month long. Its superior conjunction – when it’s on the far side of the sun from Earth for this orbit – occurs on June 6, 2016. Venus will actually pass directly behind the sun during this particular superior conjunction, exactly four years after Venus swung directly in front of the sun’s disk at inferior conjunction on June 6, 2012 – and then 8 years before that, swung directly in front of the sun on June 8, 2004.

In the meantime, while Venus is absent from the June 2016 nighttime sky, enjoy the presence of three planets – Jupiter, Mars and Saturn – as soon as darkness falls all month long.

Bottom line: There three bright planets – Jupiter, Mars and Saturn – light up the June 2016 evenings, throughout the month.

Thank you! Your submission has been received!
Oops! Something went wrong while submitting the form.
END_OF_DOCUMENT_TOKEN_TO_BE_REPLACED