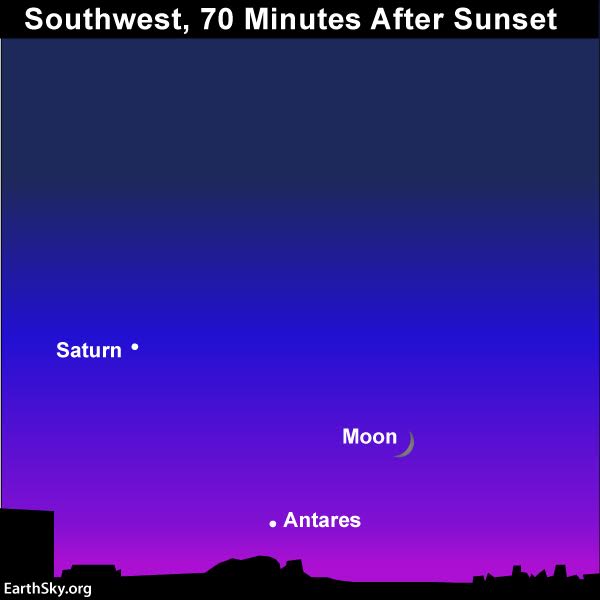 Tonight – October 22, 2017 – and for the next few evenings, look for the slender waxing crescent moon in the sky after sunset. As evening dusk deepens into nightfall, watch for two bright celestial lights to pop out in the moon’s vicinity. They are the star Antares and planet Saturn. At this magical hour, you might also note the moon’s dark side all covered over by earthshine, or twice-reflected sunlight. Earthshine is light reflected from Earth to the moon and, in turn, reflected by the moon back to Earth.

Our chart at top is for mid-northern North American latitudes, but most everyone worldwide should spot the lunar crescent after sundown, with Antares and Saturn nearby. Just know that the angle of the ecliptic – or path of the sun, moon and planets – appears different from various latitudes. From far-northern latitudes, the angle will be more narrow. From the Southern Hemisphere, the ecliptic angles more directly straight up, above the sunset, at this time of year.

About those far-northerly latitudes (such as Alaska) … Antares sets too soon to be visible in your sky, but look for the moon and Saturn to shine close to the horizon at dusk and nightfall these next few evenings.

Click here for a recommended almanac giving you the setting times for the sun, moon, Antares and Saturn in your sky.

There are several ways to distinguish Saturn from Antares, by the way. Saturn shines higher in the sky, is somewhat brighter than Antares and sets after Antares sets. If your sky is dark enough, you might be able to distinguish ruddy Antares from golden Saturn by color. Click here for more about the ringed planet Saturn.

Antares, the brightest star in the constellation Scorpius the Scorpion, is a red supergiant star that dwarfs our sun to almost nothingness. Although our sun’s diameter spans about 109 Earth-diameters and the sun’s volume is that of 1.3 million Earths, Antares is thought to have a diameter exceeding 700 sun-diameters and the volume of hundreds of millions of suns. Talking about gigantic!

Bottom line: Most everyone worldwide should spot the young moon after sundown, with Antares and Saturn nearby. Miss ’em tonight? No worries. They’ll be close the next few evenings.

Thank you! Your submission has been received!
Oops! Something went wrong while submitting the form.
END_OF_DOCUMENT_TOKEN_TO_BE_REPLACED