Mercury after sunset in early April 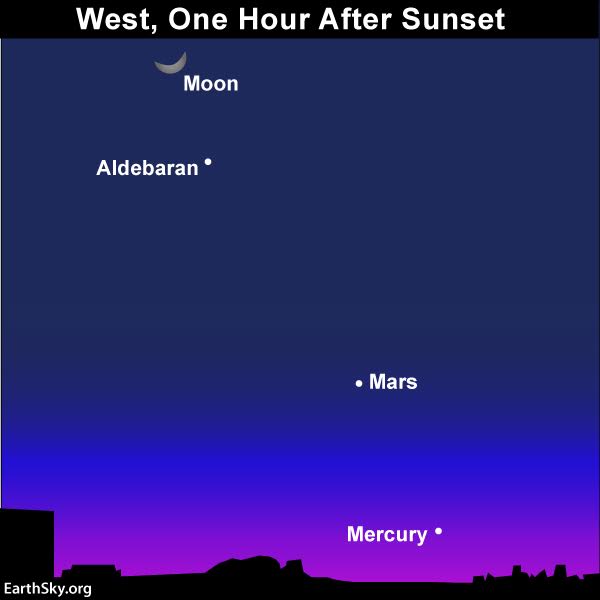 Tonight – April 1, 2017 – just might be your night to view the elusive planet Mercury in the western sky after sunset – if you look outside only shortly after sunset – and if you live in the Northern Hemisphere or the tropics. Look for Mercury over the sunset point on the horizon, starting around 45 to 60 minutes after sunset.

Although Mercury can be seen with the eye alone, binoculars always come in handy for any Mercury search.

Mercury, the innermost planet of the solar system, swings between our morning and evening sky and often hides in the sun’s glare. But, on April 1, Mercury swings farthest east of the setting sun (19o) on the sky’s dome during its present apparition as the evening “star.” The current apparition started officially on March 7, 2017 and will end on April 20, 2017. But the best time to see Mercury is around the middle of that period, in other words, around now.

That means Mercury is staying out for a maximum time after sunset (90 minutes or more at mid-northern latitudes) in early April, 2017.

Whenever Mercury reaches its greatest evening elongation (maximum angular distance east of the setting sun) in early spring, Mercury stages its best showing in the evening sky. Because it’s now early autumn in the Southern Hemisphere, this greatest elongation of Mercury is an especially poor one for southerly latitudes.

But don’t despair if you live at temperate latitudes in the Southern Hemisphere. You’ll have a super apparition of Mercury in the morning sky in May 2017 while the Northern Hemisphere will have a very poor one.

Wherever you are, if you want to try to catch Mercury now, find an unobstructed horizon in the direction of sunset and scan for Mercury near the sunset point on the horizon as dusk gives way to darkness.

Bottom line: The first week of April 2017 provides you with a golden opportunity to catch Mercury, the planet that’s often lost in the glare of the sun.

Thank you! Your submission has been received!
Oops! Something went wrong while submitting the form.
END_OF_DOCUMENT_TOKEN_TO_BE_REPLACED