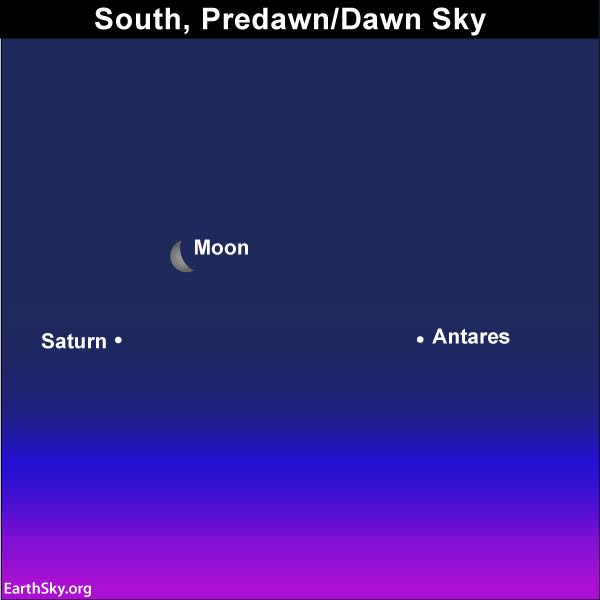 Before sunrise tomorrow – February 20, 2017 – the waning crescent moon again appears close to the planet Saturn and the star Antares on the sky’s dome. However the moon will be nearer to Saturn than it was the day before (February 19). That’s because, from everywhere on Earth, the moon travels eastward in front of the backdrop stars of the zodiac at the rate of about 13o per day or one-half degree (one moon diameter) per hour.

Each day this upcoming week, the moon will be sinking away from Saturn and the star Antares, and closer to the sunrise point on the horizon. Then the moon will eventually leave the morning sky as it turns new on February 26, 2017.

In contrast, the planet Saturn will be found within this section of the starry sky, and relatively close to the star Antares, for the remainder of this year. This year, in 2017, Saturn actually shines quite close to the December solstice point on the celestial sphere (stellar sphere). If you could see the stars in the daytime, you’d see the sun in front of the constellation Sagittarius on the December solstice.

Northerly latitudes (United States and Europe) may have difficulty seeing The Teapot before dawn right now. But this star formation rises about a half-hour earlier each week. So if The Teapot is not visible before dawn now, it should become visible in your southeast sky in another week or two.

Once you find The Teapot, you can star-hop to the December solstice point in the sky, as shown on the sky chart above, visualizing it with your mind’s-eye.

Bottom line: Before sunrise on February 20, 2017, let the waning crescent moon be your guide to the planet Saturn, the star Antares and the December solstice point.

Thank you! Your submission has been received!
Oops! Something went wrong while submitting the form.
END_OF_DOCUMENT_TOKEN_TO_BE_REPLACED