Moon points to Venus and Mars 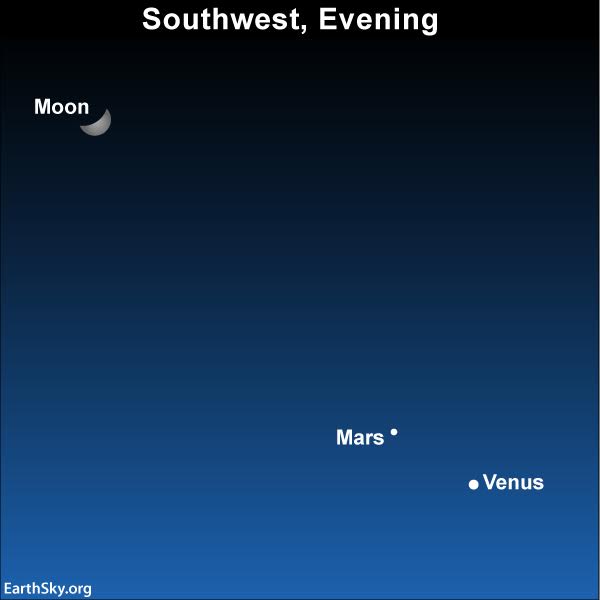 Tonight – February 2, 2017 – the moon isn’t as close to Mars and Venus as it was on February 1. But you can still use the moon to find these planets because the lit side of the moon points toward them. Given a clear sky, you simply can’t miss Venus below the moon. This dazzling world ranks as the second-brightest celestial object to adorn the nighttime, after the moon.

Mars is nowhere as bright as Venus. But once dusk gives way to darkness, you should be able to see Mars popping out a short hop above Venus, on a line with Venus and the moon.

February 2 presents a waxing crescent moon. Waxing means the phase is increasing; crescent means the illuminated portion is less than 50% but more than zero. As darkness falls, starting today and each day until the end of next week, watch as the moon waxes toward full phase.

The upcoming full moon might look a little bit darker than usual, because it’ll pass through the Earth’s penumbral shadow. The map below shows who will be in a position to witness the upcoming penumbral eclipse on the night of February 10-11.

Bottom line: The February 2, 2017 moon isn’t as close to the planets as it was on February 1. But you can still use the moon to identify the planets because its lighted face points to them.

Thank you! Your submission has been received!
Oops! Something went wrong while submitting the form.
END_OF_DOCUMENT_TOKEN_TO_BE_REPLACED