August 6 and 7 before sunup: Moon in Taurus 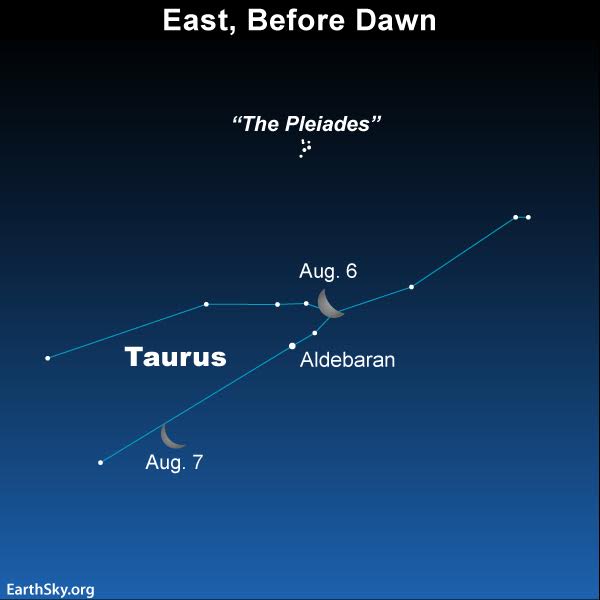 On August 6 and 7, 2018 – in the predawn hours – the waning crescent moon will be shining in front of the constellation Taurus the Bull. Look for the moon in the vicinity of reddish Aldebaran, Taurus’ brightest star. Notice that Aldebaran is part of a V-shaped pattern of stars. This pattern is called the Hyades. Also, look for the little dipper-shaped star cluster known as the Pleiades, aka the Seven Sisters.

To know precisely when Aldebaran and the moon rise into your sky, check out this U.S. Naval Observatory page.

The lit side of a waning moon always points in the direction that the moon travels in front of the constellations of the zodiac. From around the world on the morning of August 6, the waning moon will be moving eastward toward the star Aldebaran. Don’t confuse the moon’s eastward orbital motion with its faster westward motion across our sky. The westward motion is due to Earth’s spin. The eastward motion is due to the moon’s own movement in its orbit. The moon moves in front of the star background at the rate of about one-half degree (one moon-diameter) per hour.

In fact, as seen from north-central Asia, the moon will occult (cover over) Aldebaran in the predawn sky on August 7. Click here for more about the occultation of Aldebaran.

Bottom line: Before dawn on August 6 and 7, 2018, look for the moon in the vicinity of the constellation Taurus’ two most prominent signposts: the star Aldebaran and the Pleiades star cluster.

Thank you! Your submission has been received!
Oops! Something went wrong while submitting the form.
END_OF_DOCUMENT_TOKEN_TO_BE_REPLACED