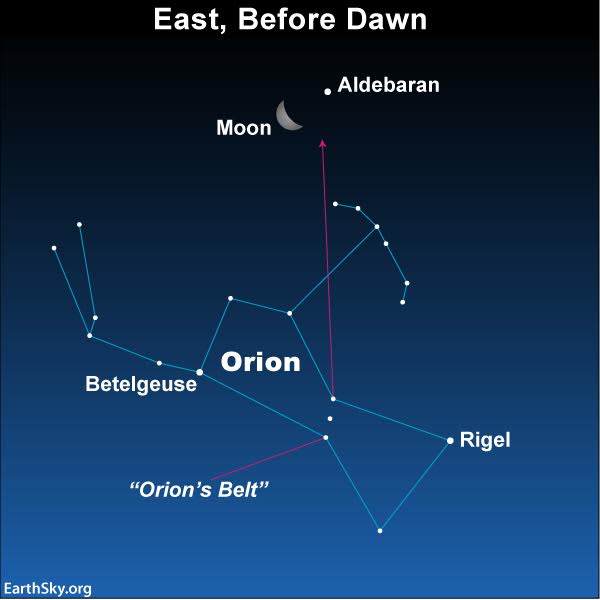 On August 16, 2017 – in the predawn hours – people around the world will see the moon shining quite close to Aldebaran, brightest star in the constellation Taurus the Bull. You’ll also see the constellation Orion the Hunter near the eastern horizon shortly before dawn’s first light. The moon will be there to show you Aldebaran this week, but note that Orion’s Belt points this star. That’s how you can find it, after the moon has left this part of the sky.

For your convenience, we list some occultation times in local time below:

Lunar occultation of Aldebaran on August 16, 2017

Click here to find out the occultation times for well over a thousand localities in Universal Time. You must convert to your local clock time to know when Aldebaran disappears behind the lit side of the moon and then reappears on the moon’s dark side.

But no matter where you live worldwide, look for the moon to shine in the vicinity of the star Aldebaran during the predawn hours on August 16, 2017.

Bottom line: If you’re a night owl or early bird, watch the moon pass in front of the constellation Taurus the Bull over the next few days.

Thank you! Your submission has been received!
Oops! Something went wrong while submitting the form.
END_OF_DOCUMENT_TOKEN_TO_BE_REPLACED