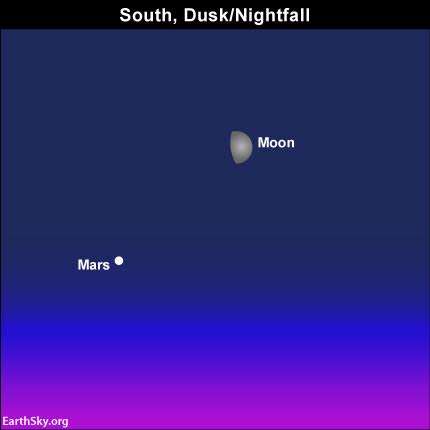 Tonight – July 13, 2016 – as darkness falls, look for the waxing gibbous moon near a reddish “star.” It’s not a star, but instead the red planet Mars. The moon and Mars both reside in front of the constellation Libra on this night. You’ll have plenty of time to catch the evening couple – the moon and Mars – as the twosome will be out until the wee hours after midnight.

And if you miss them tonight, try tomorrow night!

What’s more, there’s another nearby planet – Saturn – which is visible to the east of the moon and Mars. The moon will move on to pair up with Saturn on July 15.

Summer 2016 (winter 2016 if you live in the Southern Hemisphere) presents a grand time to watch both Mars and Saturn. So identify them now, and enjoy them for weeks to come!

Okay, got Mars and Saturn? Now, look westward as soon as darkness falls for another extremely bright planet in the evening sky. It’s the king planet, Jupiter.

Mars was brightest this year in May, when we passed between the red planet and the sun. Mars is one world in Earth’s sky whose brightness changes dramatically. In Mars’ case, the cycle is about two years, as Earth and Mars both orbit the sun.

Yet, that 1/7th-figure doesn’t tell the whole story. At its farthest, Mars disk size is actually 1/49th as great because you have to square the change in apparent diameter to find out how much its disk has shrunk (1/7 x 1/7 = 1/49).

So maybe you can see that July 2016 is good viewing for Mars!

Right now – July 2016 – is a great time to watch Mars. So enjoy the red planet before it fades into oblivion in 2017, as seen from our earthly perspective!

Thank you! Your submission has been received!
Oops! Something went wrong while submitting the form.
END_OF_DOCUMENT_TOKEN_TO_BE_REPLACED