Moon and Mars at nightfall March 30 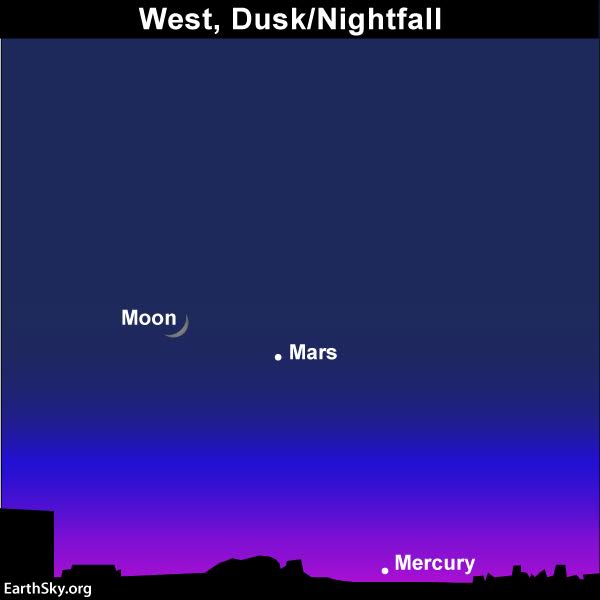 Tonight – March 30, 2017 – look for the waxing crescent moon and red desert world Mars. To view tonight’s evening couple, look in your western sky at nightfall and early evening. Keep in mind that Mars will appear no brighter than a modestly bright star.

On March 30, the lit side of the waxing crescent moon points in the direction of the elusive planet Mercury. If you live in the Northern Hemisphere or the Southern Hemisphere tropics, you might catch this world with the eye alone an hour or so after sunset.

If you can’t pick up Mercury with the unaided eye, try your luck scanning with binoculars near the sunset horizon.

Mercury won’t be as easily visible from southern temperate latitudes, even with binoculars, because it sets so soon after the sun. But, if you try, you might still catch it.

Over the next several days, the moon will be traveling upwards in the evening twilight, moving in front of the backdrop constellations of the zodiac. Given a clear sky, everyone worldwide should be able to see the bright star Aldebaran and the Pleiades star cluster, the constellation Taurus the Bull’s two most prominent signposts, above the moon on Thursday evening and even closer to the moon on Friday evening.

You might notice that – while both Aldebaran and Mars are reddish in color – Aldebaran is brighter than Mars. Why is Mars so faint now? Sometimes this planet is as bright as Jupiter (which, by the way, can be seen ascending in the east when true darkness falls). Jupiter is bright because it’s so big, and its cloud cover is so reflective of sunlight. Moreover, it’s particularly bright now because it’s about to reach its yearly opposition when Earth goes between Jupiter and the sun. That’ll happen on April 7.

So Jupiter and Earth are now on the same side of the sun, nearly at their closest for 2017. Meanwhile, Mars lies on the far side of the sun, and nearly 4.5 times farther distant than when Mars was last at opposition on May 22, 2016. That’s why Mars currently appears rather meek in our sky. Earth will soon “turn the corner” ahead of Mars in orbit, causing the Red Planet to fall into the sun’s glare.

Bottom line: Let the moon guide your eye to the red planet Mars (and possibly Mercury) as darkness falls on March 30. Then – after it gets good and dark – turn eastward to see Jupiter rising.

Thank you! Your submission has been received!
Oops! Something went wrong while submitting the form.
END_OF_DOCUMENT_TOKEN_TO_BE_REPLACED