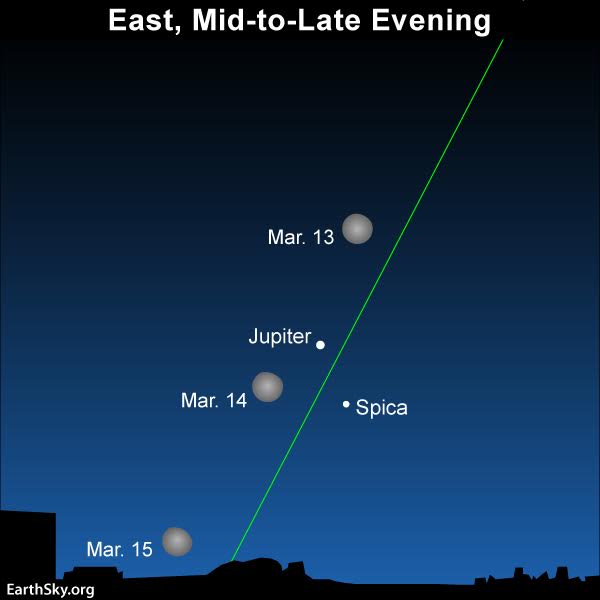 Tonight – March 13, 2017 – and tomorrow night, look for the brilliant waning gibbous moon to pair up with the dazzling planet Jupiter and the nearby bright star Spica. Depending on where you live worldwide, the moon and Jupiter will rise over your eastern horizon an hour to a few hours after sunset. Click here for recommended sky almanacs; they can help you find the rising times of the moon and Jupiter (and the star Spica) into your sky.

Our chart at the top of this post shows the changing position of the moon relative to Jupiter and Spica, as seen from mid-northern North American latitudes. From the world’s Eastern Hemisphere – Europe, Africa, Asia, Australia and New Zealand – the moon is offset somewhat toward the previous date. As always, the green line depicts the ecliptic – the sun’s annual pathway in front of the constellations of the zodiac.

This is a marvelous time to start watching Jupiter. Earth will fly between this giant planet and the sun on April 7. This will be Jupiter’s opposition for 2017, when the planet appears opposite the sun in our sky, rising when the sun sets, brightest for the year.

Especially around now when the planet is so nearly at its best, you can actually view Jupiter’s moons as pinpoints of light with a modest backyard telescope or even good binoculars. Find out the present position of Jupiter’s moons on this handy chart, courtesy of skyandtelescope.com.

Three of Jupiter’s four largest moons are larger and more massive than Earth’s moon. In their outward order from Jupiter, the four major moons of Jupiter are Io, Europa, Ganymede and Callisto. Europa is a touch smaller and less massive than our own moon.

We’ve been asked why Jupiter’s moons move so quickly around Jupiter, although all four of Jupiter’s major moons lie farther away from Jupiter than our moon’s distance from Earth. For instance, Io – Jupiter’s closest moon – has a semi-major axis of 262,094 miles (421,800 km) in contrast to the semi-major axis of our moon: 238,855 miles (384,400 km). Despite Io’s greater distance from its parent planet, Io revolves around Jupiter in 1.769 days. Meanwhile, our moon takes a whopping 27.322 days to orbit Earth. Why?

It’s Jupiter’s great mass that causes Io and Jupiter’s moons to move so quickly around Jupiter. The giant planet Jupiter has more than twice the mass of all the other solar system planets, dwarf planets, asteroids and moons combined. Jupiter’s mass is 318 times that of the Earth.

Thank you! Your submission has been received!
Oops! Something went wrong while submitting the form.
END_OF_DOCUMENT_TOKEN_TO_BE_REPLACED