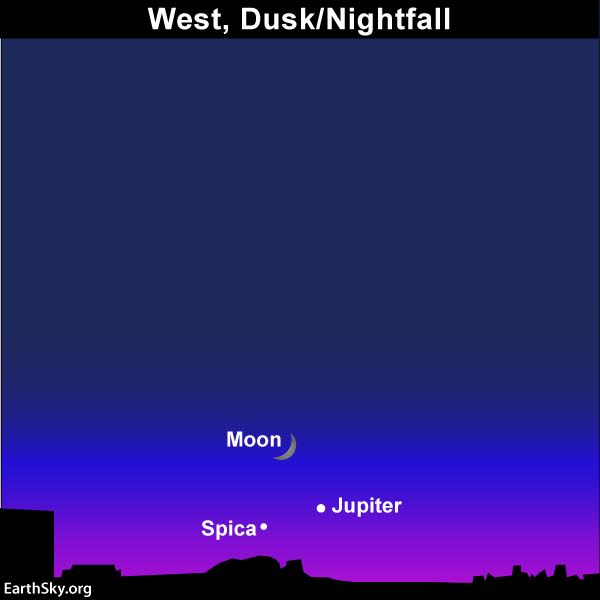 Tonight – August 25, 2017 – the waxing crescent moon and dazzling planet Jupiter appear close together on the sky’s dome shortly after sunset. Look to the west, in the general direction of sunset, to view them in the deepening twilight. And, as the night gets darker, watch for the star Spica to join the brilliant twosome. Spica is the brightest star in the constellation Virgo the Maiden. It’s Virgo’s sole 1st-magnitude star

It won’t be much longer before Jupiter and Spica will leave the evening sky entirely. That’s happening because Earth is pulling ahead in its orbit, and our night sky is turning away from them. Day by day, Jupiter and Spica will sink toward the setting sun. Likely, they’ll disappear in the sun’s glare by late September or early October 2017.

Then in the year following, in 2019, Jupiter will be in the neighborhood of Antares, the brightest star in the constellation Scorpius.

In this way – like the astronomers of antiquity – you can use key bright stars of the zodiac to plot Jupiter’s path year by year. Jupiter takes about 12 years to travel full circle in front of the backdrop stars, so you can expect to see Jupiter returning to Spica’s part of the sky at this time 12 years from now, or in the year 2029.

Bottom line: From around the world, as darkness falls on August 25, 2017, let the waxing crescent moon guide you to the planet Jupiter and the star Spica.

Thank you! Your submission has been received!
Oops! Something went wrong while submitting the form.
END_OF_DOCUMENT_TOKEN_TO_BE_REPLACED