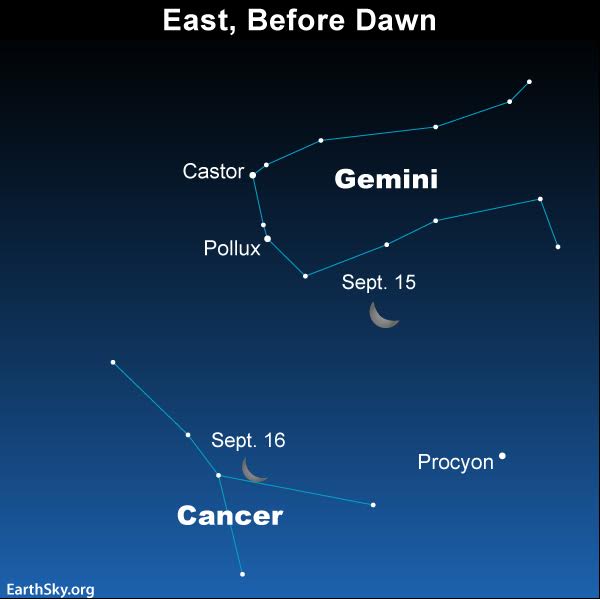 On the mornings of September 15 and 16, 2017, you’ll find the stars Castor and Pollux – the zodiacal constellation Gemini the Twins – near the waning crescent moon.

They’re up late at night, too, but highest in the sky around dawn. After the moon, Castor and Pollux rise late tonight, they’ll go westward and upward throughout the wee morning hours for the same reason that the sun goes westward and upward after sunrise. The Earth spins eastward beneath the heavens, causing the sun, moon, planets and stars to rise in the east and to set in the west each day. Any celestial object – such as the sun, moon, planet or star – transits (reaches its highest point in the sky) midway between rising and setting.

If you’d like to know when any major solar system body rises/sets/transits in your sky, check out this U.S. Naval observatory page. The Gemini stars and Procyon fade into the glare of dawn before they transit in September. However, when the month of October comes rolling around, these bright stars will transit before dawn.

The moon actually moves eastward relative to the constellations of the zodiac, even as it moves westward across Earth’s sky each day. Therefore, watch for the moon to move away from the Gemini stars, Castor and Pollux, and toward the constellation Cancer over the next few days. If you’re up before dawn on September 15 and 16, note the change of the moon’s position after just one day.

On the average, the moon moves 13o eastward in front of the constellations of the zodiac each day. (For reference, the diameter of the moon spans about one-half degree.) So, on the average, the moon rises and sets about 50 minutes later daily. The moon’s change of position relative to the backdrop stars is due to the moon’s orbital motion around Earth.

The stars rise and set about four minutes earlier each day. That’s because the Earth in its orbit goes about one degree around the sun, slightly changing our perspective of the starry heavens from day to day.

Bottom line: Enjoy the moon and Gemini stars, Castor and Pollux, on the mornings of September 15 and 16, 2017.

Thank you! Your submission has been received!
Oops! Something went wrong while submitting the form.
END_OF_DOCUMENT_TOKEN_TO_BE_REPLACED