Moon between Mars and Saturn June 17 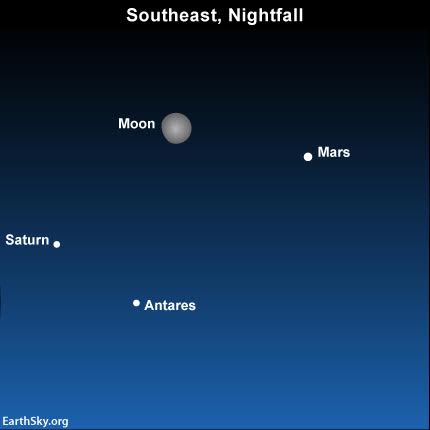 Tonight – June 17, 2016 – you can’t miss the almost-full waxing gibbous moon at nightfall. This evening’s moon shines in between the red planet Mars and the ringed planet Saturn (of course, you won’t see Saturn’s rings without a telescope). Mars outshines Saturn, and Saturn, in turn, outshines nearby Antares, the brightest star in the constellation Scorpius the Scorpion.

We expect this bright celestial triangle of lights formed by Mars, Saturn and Antares to withstand tonight’s drenching moonlight. Use the moon to find the trio tonight, and then watch them in the evening sky for several months to come.

Because Mars and Saturn are planets, these worlds shine by reflecting the light of the sun. Antares is a star, so it shines by its own light. Planets tend to shine with a steadier light than the twinkling stars. See if this general rule holds true for you tonight.

Saturn, the sixth planet outward, resides at a mean distance of about 9.582 astronomical units. A planet’s mean distance from the sun can also be regarded as the planet’s semi-major axis.

Let us share a cool trick with you. Once you know a planet’s mean distance (semi-major axis) in astronomical units, you can figure that planet’s orbital period in Earth years with this easy-to-use formula:

Bottom line: Tonight – June 17, 2016 – let the waxing gibbous moon show you the planets Mars and Saturn, plus the star Antares.

Thank you! Your submission has been received!
Oops! Something went wrong while submitting the form.
END_OF_DOCUMENT_TOKEN_TO_BE_REPLACED