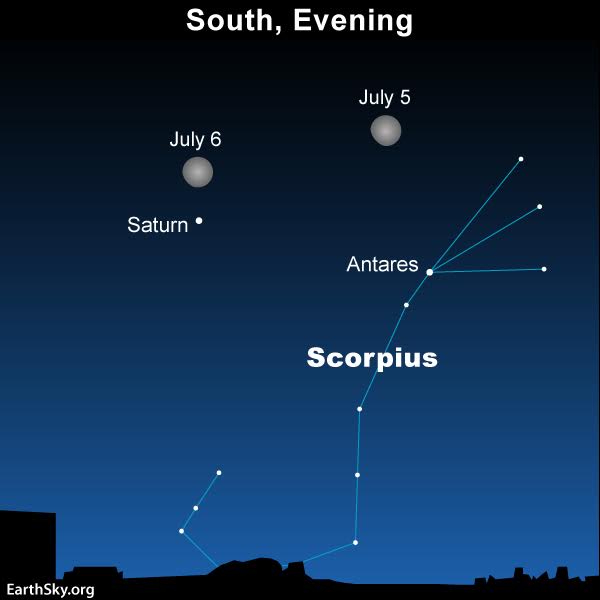 Tonight – July 5, 2017 – let the bright waxing gibbous moon guide you to the star Antares and planet Saturn. We expect both Antares and Saturn to be bright enough to overcome tonight’s lunar glare.

Although we draw in the stick figure of the constellation Scorpius the Scorpion, you might have some difficulty making out its fishhook-shape tonight. But the moon will drop out of the evening sky by mid-month, enabling you to see this constellation in all its starlit glory,

You can distinguish Saturn from Antares by color. Antares shines in a sparkling reddish hue, while Saturn appears more golden. If you have difficulty discerning color on this moonlit night, try your luck with binoculars. Or wait until the moon moves away.

Because Antares is a star, it’ll be more apt to twinkle than the planet Saturn, which typically shines with a steadier light. A 1st-magnitude star, such as Antares, tends to sparkle most wildly when it’s close to the horizon, and, at such times, planets can twinkle a bit, too. Earth’s atmosphere, of course, is what’s causing the twinkling, and we’re looking through more atmosphere in the direction of a horizon than overhead.

With the telescope – even a modest backyard variety – you can easily see the rings of Saturn. Once you spot Saturn in the telescope, you’ll see why so many sky watching enthusiasts consider Saturn the jewel of the solar system.

Because the moon moves eastward in front of the constellations of the zodiac, look for the moon to pair up with Saturn on July 6, and to be east of Saturn on the day after, July 7.

Bottom line: As soon as darkness falls on July 5, 2017, watch for the moon, star Antares and planet Saturn.

Thank you! Your submission has been received!
Oops! Something went wrong while submitting the form.
END_OF_DOCUMENT_TOKEN_TO_BE_REPLACED