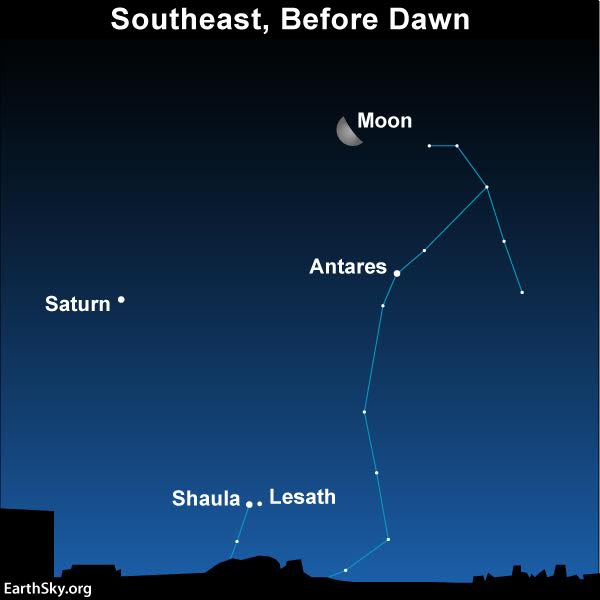 Meanwhile, Saturn – now closer to the Tail of the Scorpion – shines high above the stinger stars, Shaula and Lesath. It rises even closer to the dawn. The moon, in its never-ending orbit around Earth, will continue moving across our sky’s dome to pass to the north of Saturn on Monday morning (February 20, 2017) and also Tuesday morning.

Will you see the Scorpion’s curved Tail in your predawn sky? Maybe if your sky is dark enough. If not, you should at least see Saturn and Antares near the moon. They’ll be the brightest objects in the moon’s vicinity.

In our Northern Hemisphere, Antares is considered a summertime star, because it’s during the summer months that this star shines in the evening sky. By October, this star appears only briefly after sunset, and follows the sun beneath the horizon shortly thereafter. By November, Antares has disappeared from the nighttime sky.

Every year, the sun and Antares are in conjunction on or near December 1. In other words, that’s when Antares is most directly behind the sun each year, as seen from our earthly vantage point. Then, the sun and Antares rise and set pretty much in unison, so that Antares is lost in the light of the sun throughout late November and early December. However, by mid to late January, the sun drifts far enough east of Antares so that this star appears above the southeast horizon before sunrise. What’s really happening, of course, is that Earth has moved far enough along in its orbit so that Antares appears to the west of the sun, instead of behind it.

Seeing Antares and the constellation of Scorpius before dawn is a sure sign that the shortest days of winter are gone – especially if you can spot the Scorpion stinger stars: Shaula and Lesath. Look for these stars; they’ll give you a first glimpse of spring!

Bottom line: Late tonight – February 18, 2017 – or before dawn on February 19, see the moon, Antares and Saturn adorning the predawn sky.

Thank you! Your submission has been received!
Oops! Something went wrong while submitting the form.
END_OF_DOCUMENT_TOKEN_TO_BE_REPLACED