Identify Saturn near moon on August 2 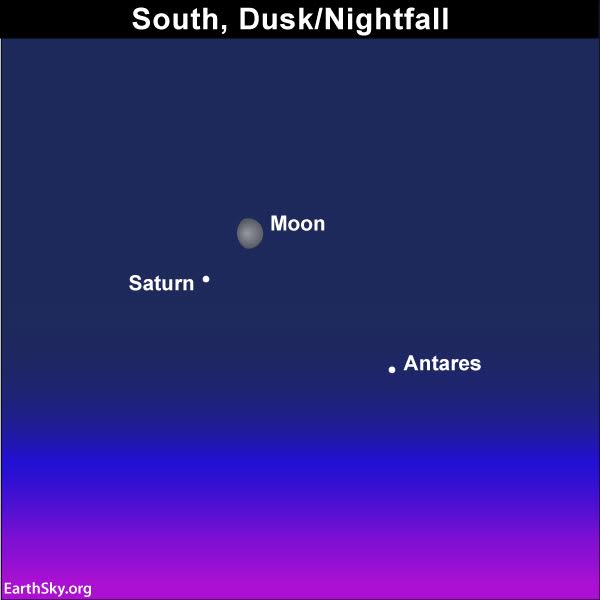 Tonight – August 2, 2017 – the moon and the ringed planet Saturn pair up together at nightfall. In the same vicinity of sky, note another bright celestial beauty: the ruddy star Antares, the brightest star in the constellation Scorpius.

Clouded out tonight? Watch for them tomorrow night, too …

Saturn and Antares are bright, both exhibiting 1st-magnitude brightness. However, you can distinguish these two celestial luminaries by color. Saturn displays a golden hue while Antares has a ruddy complexion. If it’s hard for you to discern color, try observing Saturn and Antares with binoculars.

Better yet, try observing Saturn with a telescope. You can view Saturn’s glorious rings even with a modest backyard variety.

Did you know that, as seen from Earth, the orientation of Saturn’s rings appears to shift regularly, over time? This happens as we orbit the sun yearly, while Saturn orbits once every 29.5 years. In 2017 – as we gaze across space to Saturn – we are seeing the north face of Saturn’s rings. Saturn’s rings are inclined at 27o toward Earth in 2017, which is about as wide open as they ever appear to us from our world.

The north side of Saturn’s rings will open up most fully on October 26, 2017, to exhibit a maximum inclination of 27o.

Saturn’s rotational axis is inclined at 27o to its orbital plane, and – as we said above – this planet takes nearly 29.5 Earth-years to orbit the sun. Therefore, the maximum inclination of Saturn’s rings recurs in a cycle of about 29.5 years, as is shown in the table and diagram below:

Thank you! Your submission has been received!
Oops! Something went wrong while submitting the form.
END_OF_DOCUMENT_TOKEN_TO_BE_REPLACED