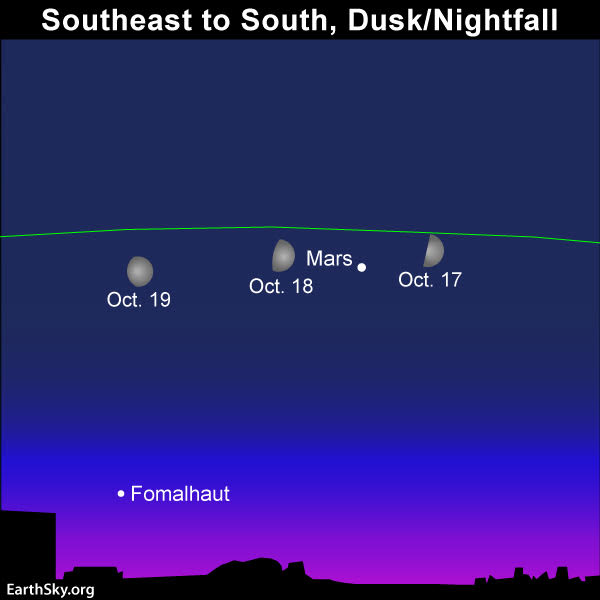 On October 17 and 18, 2018, the bright “star” near the moon is really a planet, Mars. As darkness falls, you’ll likely also notice the star Fomalhaut, located a big hop from the moon and Mars on the sky’s dome. Although Fomalhaut ranks as 1st-magnitude star, this star currently pales in comparison to Mars, which is still bright after its wonderful apparition in our sky this past July and August. Mars is presently about six times brighter than Fomalhaut.

Of course, Mars is a planet, shining by reflected sunlight, whereas Fomalhaut is a mighty star, shining by its own internal light. At a distance of 0.7 astronomical units from Earth at present, Mars is Earth’s backyard celestial neighbor. Fomalhaut, though a rather nearby star at a distance of 25 light-years, nonetheless resides well over two million times Mars’ distance from us.

You’ll have no trouble seeing the red planet Mars with the eye alone. But Mars’ two dinky moons – Phobos and Deimos – are extremely hard to spot through a telescope, even though the American astronomer Asaph Hall managed to perform the feat in 1877. It has been commonly thought that these moons were captured asteroids, but a study earlier this year suggested a more violent origin for the two moons.

Deimos, the outer and smaller moon, has a mean radius of about 4 miles (6 km). At a distance of about 7 Mars radii (Mars’ radius = 2,106 miles or 3,389 km), this moon orbits Mars in about 30 hours. Mars rotates on its axis in 24.6 hours. So Deimos takes more time to orbit Mars than Mars takes to rotate once on its axis. Deimos (like most solar system moons) is said to orbit Mars outside the synchronous orbit radius – the distance at which the moon’s orbital period would equal its parent planet’s rotational period.

Phobos, the inner and larger moon, has a mean radius of about 7 miles (11 km). At a distance of about 2.76 Mars radii, this moon actually orbits Mars much more quickly than Mars rotates on its axis (7 2/3 hours versus 30 hours). Because Phobos’ orbit is beneath the synchronous orbit radius, this moon’s orbit is considered to be unstable. Phobos is expected to either crash into Mars, or to break up as a ring of debris, in about 50 million years.

And yesterday – October 17, 2018 – Earth’s moon swung out to apogee, its most distant point from Earth for the month.

Thank you! Your submission has been received!
Oops! Something went wrong while submitting the form.
END_OF_DOCUMENT_TOKEN_TO_BE_REPLACED