Moon and Leo before sunup October 5 to 7 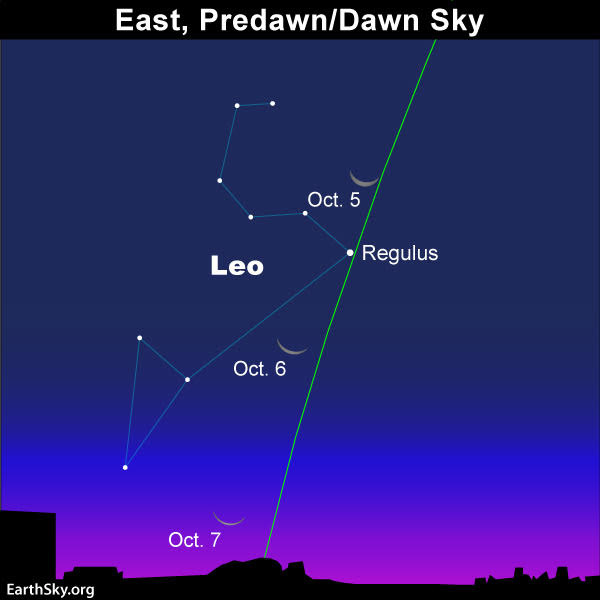 Before dawn on October 5, 6 and 7, 2018, watch as the moon slides in front of the constellation Leo the Lion. Leo is identifiable for the prominent backwards question mark pattern within it; this pattern is a well-known asterism, called The Sickle. The illuminated portion of the waning moon always points eastward. That’s also the moon’s direction of travel in front of the background stars of the zodiac. This motion is, of course, due to the moon’s movement in orbit around Earth.

So – on the mornings of October 5, 6 and 7 – you can easily see the moon’s change of position relative to Regulus, the constellation Leo’s only 1st-magnitude star, located at the bottom of the backwards question mark pattern. Regulus depicts the Lion’s Heart and is sometimes known as Cor Leonis.

On the morning of October 5, note that the lit side of the waning crescent moon points at Regulus.

By the the morning of October 6, the moon will have swept past Regulus, moving, as it always does, in its ceaseless orbit around Earth. It’ll be located in Leo’s mid-section.

By the morning of October 7, the very thin waning crescent moon will have moved closer to Leo’s hindquarters, represented by a triangle pattern. On the chart below, pick out the star Denebola in Leo. Many stars have deneb in their name. It means tail, in this case the tail of Leo the Lion.

The ecliptic is shown in green on the chart at the top of this post. It’s like a center line on the great big celestial highway. It divides the band of stars that we call the zodiac into its northern and southern sides. Regulus, the only 1st-magnitude star to align almost squarely with the ecliptic, resides a scant 1/2 degree north of it. For reference, the moon’s angular diameter equals about 1/2 degree.

Then, after that, the moon will swing to the south of Regulus every month, for years on end, until the next series of monthly Regulus occultations from June 11, 2035, to November 11, 2036.

Bottom line: Watch for the waning crescent moon to sail to the north of Regulus and the ecliptic as it passes in front of Leo from October 5 to 7, 2018.

Thank you! Your submission has been received!
Oops! Something went wrong while submitting the form.
END_OF_DOCUMENT_TOKEN_TO_BE_REPLACED