See the moon, Saturn, Antares in a line 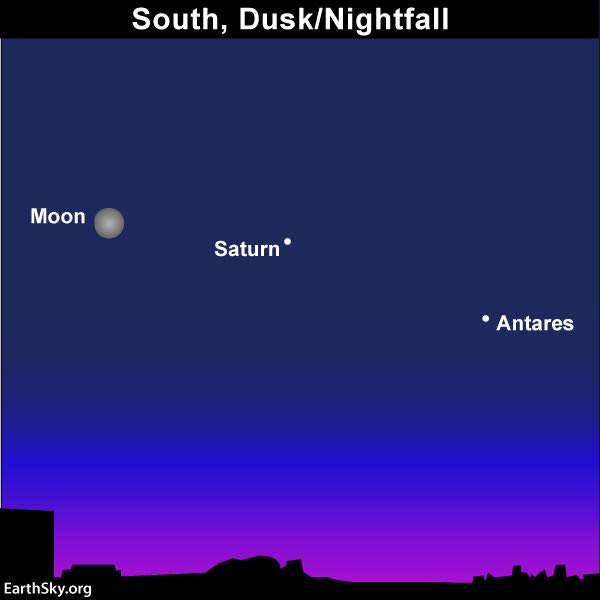 Tonight – July 7, 2017 – look for a line-up of bright celestial objects. The moon, planet Saturn and bright star Antares come out first thing after sunset and stay out until the wee hours after midnight. They can be seen from around the world, although the line is more symmetrical – with Saturn more equidistant from the July 7 moon and Antares – from Earth’s Western Hemisphere.

Look for the in south to southeast sky at nightfall, if you’re at mid-northern latitudes. From the Southern Hemisphere, look for them high overhead around 9 to 10 p.m. local time (that is the time on your clock, no matter where you are).

Golden Saturn, 6th planet outward from the sun, is the farthest world you can easily see with the unaided eye. Although you can’t see Saturn’s rings without an optical aid, even a modest, backyard telescope will do the trick. In 2017, the north side of the rings are maximally tilted toward Earth, offering the best view of Saturn’s rings in years.

The 1st-magnitude star Antares is often called the Heart of the Scorpion in the constellation Scorpius. It’s a tough star to miss because Antares is very bright and distinctly red in color. Also, as seen from the Northern Hemisphere, this star appears low in the sky, and thus people in this part of the world often notice that Antares twinkles a lot.

Every month in July 2017 – as long as they are not hidden by the sun’s glare – you can see the moon in its monthly travels passing in front of the constellations of the zodiac. Thus the moon passes relatively close to Saturn and Antares every month. Some years, the moon can actually occult – cover over – this star or the planet Saturn. But not this year. Every month for the rest of 2017 the moon will swing to the north of Antares and Saturn.

The moon is a chunk of rock, shining with sunlight that reflects from its surface. It can appear to cover Saturn or Antares only because the moon is so close to us relative to Saturn and Antares.

But if you could see Saturn or Antares up close, you’d find that Saturn is a large planet and that Antares is one of the galaxy’s largest stars. Saturn has the volume of 764 Earths, and Antares has the volume of hundreds of millions of suns.

Antares lies some 600 light-years away, in contrast to only 8 light-minutes for the sun. So, like the moon, our sun appears larger to us than this gigantic star.

Bottom line: No matter where you are on Earth, look outside on the night of July 7, 2017 for a golden planet and a reddish star to line up with the moon.

Thank you! Your submission has been received!
Oops! Something went wrong while submitting the form.
END_OF_DOCUMENT_TOKEN_TO_BE_REPLACED