Will you see Mercury after sunset? 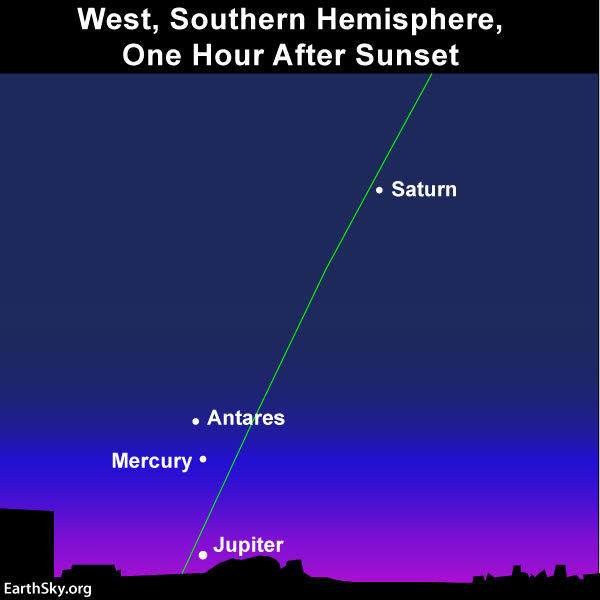 Today – November 6, 2018 – the planet Mercury reaches its greatest eastern elongation, that is, its maximum angular separation of 23 degrees from the setting sun for this evening apparition. As seen from the whole Earth, Mercury entered the evening sky (at superior conjunction) on September 21, 2018, and it’ll leave it (at inferior conjunction) on November 27, 2018.

It’s the same distance from the sun, on the sky’s dome, for all of us. Yet whether you see Mercury easily or not will depend on where you are on the Earth’s globe. Which hemisphere sees it better? Notice that our chart at top is set for the Southern Hemisphere, and notice that the ecliptic – or path of the sun, moon and planets across our sky – makes a steep angle with the evening horizon, as shown on the chart above.

If you want to give it a try anyway, be sure to bring along binoculars! Use them to scan along the horizon. If you spot the planets, you can remove the binoculars and try to see them with the eye.

Click here for a recommended almanac giving you the setting times for the sun, Jupiter, Mercury and Antares in your sky.

By the way, southerly latitudes will also enjoy a better view of the young waxing crescent moon pairing up with these two bright planets and Antares on or near November 9, 2018. The sky chart below is for Perth, Western Australia, but you can click here to find out when the sun, moon, Jupiter, Mercury and Antares set in your sky.

Bottom line: On November 6, 2018, Mercury reaches its greatest eastern elongation from the sun. Those at southerly latitudes are more likely to spot Mercury (plus nearby Jupiter and Antares) as dusk deepens into nightfall.

Thank you! Your submission has been received!
Oops! Something went wrong while submitting the form.
END_OF_DOCUMENT_TOKEN_TO_BE_REPLACED