Mercury and Saturn, moon and Jupiter 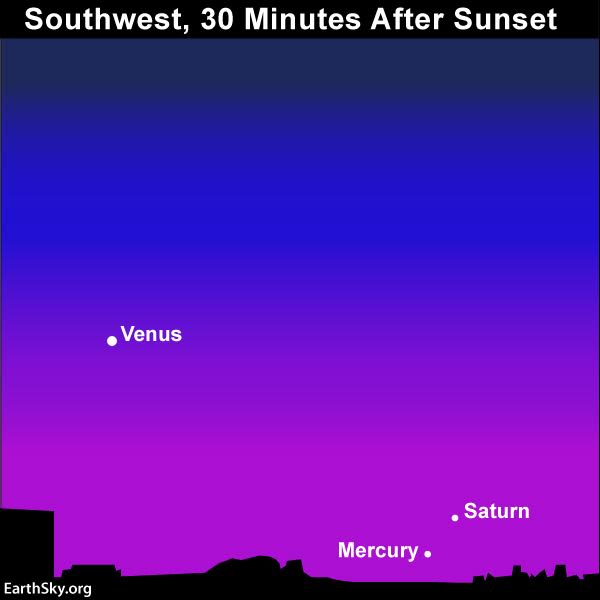 Tonight – November 23, 2016 – after sunset, watch for Mercury, our solar system’s innermost planet, to meet up with Saturn, farthest planet easily visible to the unaided eye. Bring along binoculars, if you have them, for these worlds will be in conjunction in the glow of evening twilight. Meanwhile, before dawn on Thursday, the moon is sweeping past the planet Jupiter. More about that below.

The Mercury-Saturn conjunction will be especially challenging to view from northerly latitudes – such as those in the U.S. and Europe. From our latitudes, Mercury and Saturn lurk low in the southwest at sunset and follow the sun beneath the horizon less than an hour later. You’ll probably need binoculars for any chance of spotting them. Look first for the dazzling planet Venus, the brightest starlike object in the evening sky, as soon as the sky begins to darken (say, 15 to 45 minutes after sundown). Then look for Mercury and Saturn nearer the horizon, below Venus.

You’ll have a better chance of catching Mercury and Saturn beneath Venus in the Southern Hemisphere, where Mercury and Venus stay out longer after sunset. You may still want to bring along binoculars, though, for these two worlds still set before it gets good and dark, even at far southerly latitudes. Click here for an almanac, to find out when these planets set in your sky.

From almost everywhere worldwide, two of the four naked-eye evening planets – Mars and Venus – should be rather easy to see at nightfall and early evening. Venus, the the third brightest celestial object after the sun and moon, is hard to miss. From northerly latitudes, Mars shines to the upper left of Venus.

From the Southern Hemisphere, Mars is found more directly above Venus, the queen planet. Although the red planet Mars is nowhere as brilliant as Venus, Mars easily shines on par with the sky’s brightest stars.

Now here’s something we all can see, no matter where you live in the world. The king planet Jupiter is the sole naked-eye planet to shine in the morning sky at present. Simply get up before sunrise over the next several days to note that super-brilliant “star” close to the waning crescent moon on the sky’s dome. That’ll be Jupiter.

Jupiter is the fourth brightest celestial body after the sun, moon and Venus. But you can’t mistake it for anything else, since Venus is visible now only in the west after sunset.

The moon has been taking aim on Jupiter for the past several mornings, and it’s about to sweep past Jupiter before dawn. You can see them near each other on the morning of November 24 and again on November 25.

Bottom line: Mercury and Saturn are in conjunction on November 23, 2016, but the twosome may be hard to spot in the glow of evening twilight. Meanwhile, on the mornings of November 24 and 25, the moon appears near Jupiter before dawn.

Thank you! Your submission has been received!
Oops! Something went wrong while submitting the form.
END_OF_DOCUMENT_TOKEN_TO_BE_REPLACED