Mercury below Venus on May mornings 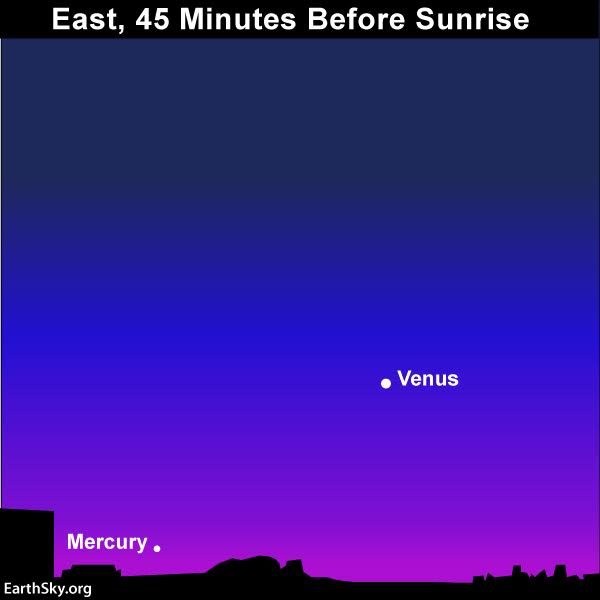 Throughout the month of May 2017, you can easily see the very bright planet Venus before dawn, and you can use Venus to find a fainter planet, Mercury, before sunrise. Mercury will sit deeper in the glare of twilight than Venus does in the May 2017 morning sky. It’s a grand and long morning apparition of Mercury for the tropics and Southern Hemisphere. Mid-northern or far-northern latitudes in the Northern Hemisphere won’t see Mercury as easily, but give it a try, and Mercury might surprise you.

Mercury, the innermost planet of our solar system, swings to its greatest western (morning) elongation on May 17, 2017. At its greatest western elongation, Mercury reaches its maximum angular separation from the sun (26o west) during its May 2017 apparition as a morning “star.” This apparition officially started on April 20, by the way, which was the day Mercury passed more or less between Earth and the sun at inferior conjunction and entered the morning sky. It’ll officially end on June 21, when Mercury reaches superior conjunction and re-enters the evening sky.

Although Mercury is as bright as a first-magnitude star, it pales next to Venus, the third-brightest heavenly body to light up the sky, after the sun and moon. At present, Venus beams 100 times more brilliantly than Mercury in the morning sky. That’s why you want to find Venus first, then search for Mercury beneath Venus and closer to the horizon.

Mercury sits in the glare of morning twilight at northerly latitudes (such as in the United States, Canada, and Europe) and will be a challenge to spot over the sunrise point on the horizon. Use binoculars to scan for Mercury along the sunrise horizon. Again, this present morning apparition of Mercury greatly favors the tropics and the Southern Hemisphere.

Bottom line: Throughout May 2017, southerly latitudes can easily spot Mercury below Venus in the east before dawn. Mercury is tougher from northerly latitudes. Use binoculars. The height of this apparition of Mercury comes at its greatest western elongation on May 17, 2017.

Thank you! Your submission has been received!
Oops! Something went wrong while submitting the form.
END_OF_DOCUMENT_TOKEN_TO_BE_REPLACED