Have you seen Venus and Mercury yet?

Mercury is still in the same binocular field as brilliant Venus, and both are in the west after sunset. Plus, the moon will soon sweep past them. 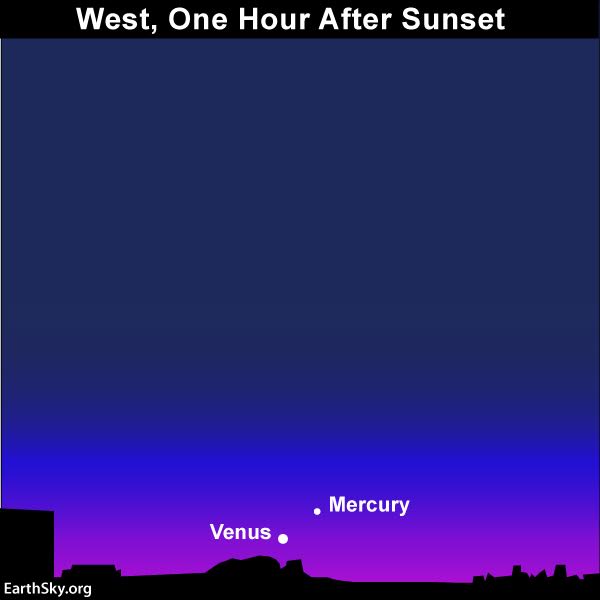 Tonight – March 15, 2018 – watch for the planets Mercury and Venus in the west sky after sunset. Especially from the northern half of Earth’s globe – where Mercury and Venus appear straight up above the sunset on these near-spring evenings – you can see both worlds with the unaided eye. Watch for them as soon as the sky gets dark. Venus, being brighter, will appear first. See Venus but not Mercury? That’s possible if you’re looking too soon after sunset (too much bright twilight still), or if you’re in the Southern Hemisphere, where Venus and Mercury are more to the side of the sunset (more about that difference below). If you see Venus, but not Mercury, aim binoculars at Venus. Right now, these two worlds are so close together they appear in the same binocular field.

At mid-northern latitudes, given an unobstructed western horizon, Venus and Mercury stay out for about 75 minutes after the sun (though Mercury stays out a little while after Venus sets). At the equator (0 degrees latitude), Mercury and Venus set about one hour after sundown; and at temperate latitudes in the Southern Hemisphere, they set some 45 minutes (or less) after sunset. Click here for recommended almanacs; they can give you the setting times for Mercury and Venus in your sky. 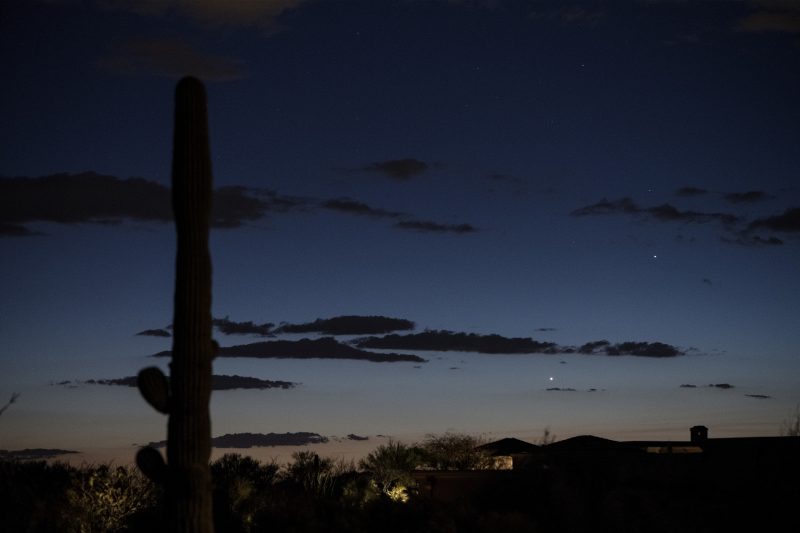 Mercury, the upper bright planet, at its greatest east elongation elongation (18 degrees from the sun). Although it’s often difficult to see Mercury, this March – from the Northern Hemisphere – Mercury is an easy spot in the fading light. Image acquired on March 14, 2018 by Eliot Herman in Tucson, Arizona, with a Nikon D850 and a Nikon 105 mm VR lens.

Because Mercury is an inferior planet – orbiting the sun inside Earth’s orbit – this world is often obscured in the light of the sun. But Mercury swings out to its greatest eastern (evening) elongation on March 15, 2018. That means Mercury reaches its greatest angular distance from the setting sun and stays out for a maximum time after sundown.

So … why the difference? Around the March equinox, the pathway of the sun, moon and planets – aka the ecliptic – intersects the horizon at a steep angle (closest to vertical) after sunset as seen from the Northern Hemisphere. Meanwhile, in the Southern Hemisphere, around the March equinox, the ecliptic hits the horizon at its shallowest angle (closest to horizontal) for the year. At southerly latitudes, Mercury and Venus appear to the side of the sun (rather than directly above it) at sunset. Thus, from the southern half of Earth’s globe, Mercury (and Venus) sit lower in the sky at dusk, buried more deeply in bright twilight, so they set considerably sooner after sunset.

Still, the moon is about to sweep past these planets. It’ll be a grand photo opportunity for those in the Northern Hemisphere, and a more challenging task from the Southern Hemisphere.

Look for the young waxing crescent moon to pair up with the planets Mercury and Venus on or near March 18, 2018!

Bottom line: Mercury’s greatest elongation – its greatest apparent distance from the sun in our sky – comes on March 15, 2018. Mercury is still in the same binocular field as brilliant Venus, and both are in the west after sunset.