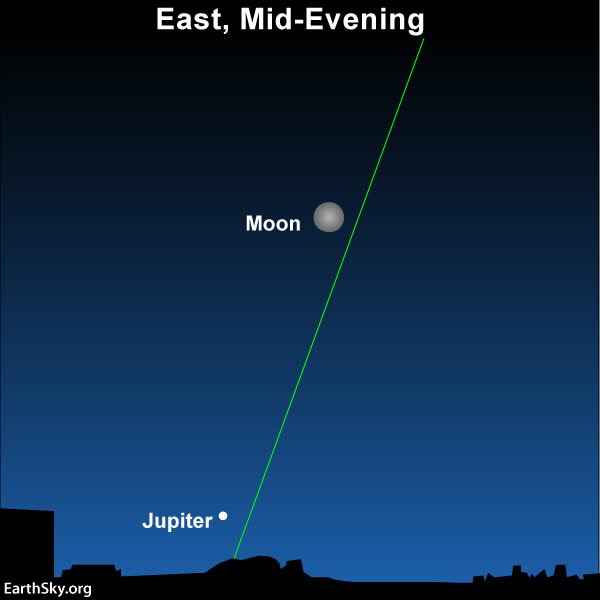 Tonight – March 12, 2017 – look eastward as darkness falls to see the brilliant, full-looking moon close to the horizon. By early-to-mid evening, or around 8 to 9 p.m. local time (9 to 10 p.m. daylight saving time), watch for the dazzling planet Jupiter to follow the moon into the nighttime sky. The moon and Jupiter will climb upward during the evening hours, to reach their high point for the night somewhat after midnight. Afterwards, the moon (and Jupiter) will sink westward, to adorn the western sky at dawn.

Check out the worldwide map below of the day and night sides of Earth at the instant of full moon (2017 March 12 at 14:54 UTC). The shadow line running through the Middle East and to the right of Africa and Madagascar depicts sunset March 12. In other words, the moon turns exactly full as the sun is setting in Saudi Arabia. Therefore, it shouldn’t come as too much of a surprise that the full moon rises and the sun sets at nearly the same time in Riyadh, Saudi Arabia (moonrise: 5:58 p.m. local time; sunset: 6:00 p.m. local time) on March 12, 2017.

To find out when the moon rises and the sun sets in your part of the world, click here and remember to check the moonrise and moonset box.

It’s not often that you’re in the part of the world where the moon turns precisely full right at sunset. Given a level horizon, as at sea, we might expect the moon to rise and the sun to set in concert in this scenario.

However, the full moon is only truly opposite the sun during a total lunar eclipse, when the moon sits smack-dab in the middle of Earth’s dark umbral shadow. Depending on which of this year’s 12 full moons we’re referring to, the full moon can swing anywhere from 5o north to 5o south of the ecliptic (Earth’s shadow). So, for this reason, the full moon rises at the vicinity of sunset but not necessarily right at sunset.

Want to know how far north or south the moon is from the ecliptic (Earth’s orbital plane) right now? Or for any chosen time and date? Click here to find out the moon’s ecliptic latitude.

Reportedly, the ancient astronomer Cleomedes saw both the sun and moon above the horizon during a lunar eclipse. He had an explanation for the rarely seen phenomenon, which is called a selenelion or selenehelion. Cleomedes correctly surmised that the Earth’s atmosphere refracts (bends) sunlight and moonlight, raising the sun and moon above their true geometrical positions.

Therefore, when we see the bottom limb of the sun or moon sitting on the horizon, that means it’s pretty much the top limb that’s touching the horizon geometrically.

Atmospheric refraction also accounts for why we get more than 12 hours of daylight on the day of the March 20th equinox.

Bottom line: On March 12, 2017, look eastward as darkness falls to see the brilliant, full-looking moon illuminating the nighttime sky. Jupiter will follow the moon into the nighttime sky by early to mid-evening.

Thank you! Your submission has been received!
Oops! Something went wrong while submitting the form.
END_OF_DOCUMENT_TOKEN_TO_BE_REPLACED