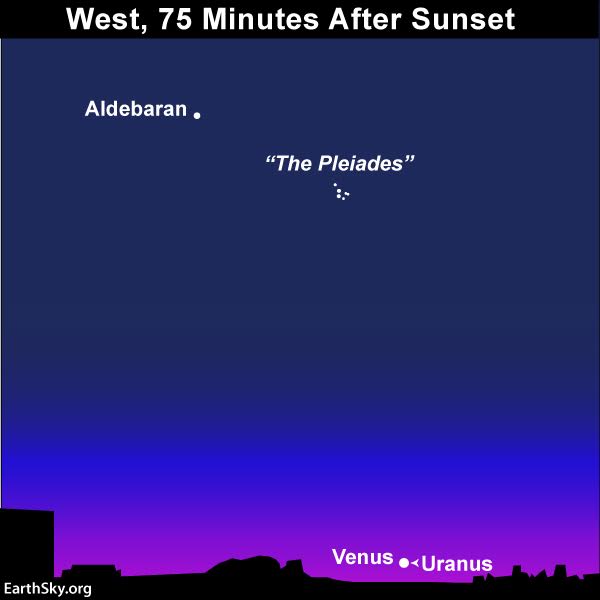 Tonight – March 28, 2018 – the planets Venus and Uranus stage the second-closest conjunction of two planets for all of 2018. Venus is the brightest planet, a shining light in our evening twilight sky now, very near the sunset point. Uranus is visible to the eye only under ideal conditions; you won’t see it unless you use optical aid. Still, faint Uranus is there, next to Venus.

Keep in mind that at mid-northern latitudes, Venus and Uranus follow the sun below the horizon about 90 minutes after sunset. At the equator (0 degrees latitude), these two worlds set about 80 minutes after the sun; and at temperate latitudes in the Southern Hemisphere, this twosome sets an hour (or less) after sundown.

Because Venus outshines Uranus by some 10,000 times, you’ll easily see Venus – but not Uranus – in the western sky after sunset. Venus, the second planet from the sun, ranks as the third-brightest celestial object to light up the sky, after the sun and the moon. People with extraordinary vision can barely perceive Uranus as a dim speck of light in a dark sky. But you won’t see Uranus, the seventh planet from the sun, in the glow of evening twilight – even with binoculars. On the other hand, telescopes and telescopic lenses might pick it up.

After this evening, Venus will slowly but surely climb out of the glare of evening twilight. Venus will stay out after dark for many months to come.

At their closest, Venus and Uranus are only about 0.07 degrees apart on the sky’s dome. That’s very close – about 1/7th of the moon’s angular diameter. But it’ll probably be difficult to see Uranus in Venus’ glare, even with an optical aid.

Bottom line: On March 28, 2018, brilliant Venus and dim Uranus have the second-closest conjunction of two planets for all of 2018.

Thank you! Your submission has been received!
Oops! Something went wrong while submitting the form.
END_OF_DOCUMENT_TOKEN_TO_BE_REPLACED