Full moon in Taurus on November 22-23 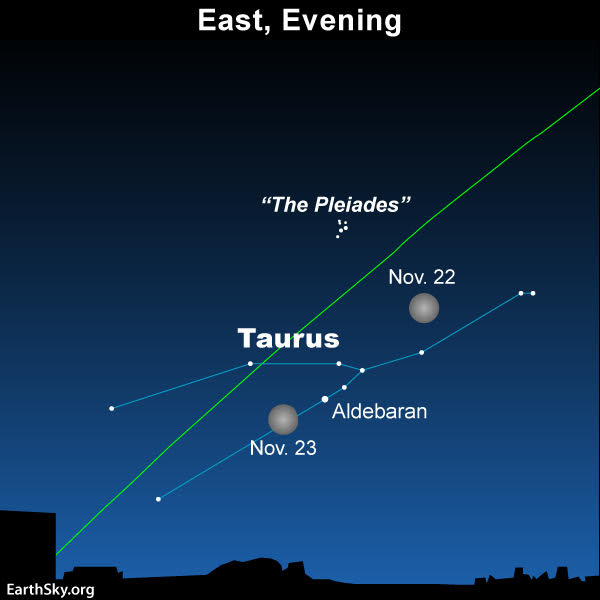 On November 22, 2018, despite the glare from the full or nearly full moon, you might be able to spot two major signposts in the constellation Taurus the Bull. Look first for the bright star Aldebaran, part of the V-shaped face of the Bull. Then look for the dipper-shaped Pleiades star cluster, in the Bull’s shoulder.

The glare from the brilliant moon will make the mighty Bull appear quite meek over these next several nights. Despite the moonlit glare, you still might be able to spot the star Aldebaran and the Pleiades star cluster. If you can’t see Aldebaran or the Pleiades, try placing your finger over the moon to reduce its blinding presence.

Although the moon actually looks full to the eye for a few days in a row, the moon is astronomically full for only an instant – when it’s 180 degrees opposite the sun in ecliptic longitude. At full moon, the sun-moon elongation equals 180 degrees. Click here to know the present elongation of the sun and moon, remembering that a positive number means a waxing moon and a negative number a waning moon.

Thank you! Your submission has been received!
Oops! Something went wrong while submitting the form.
END_OF_DOCUMENT_TOKEN_TO_BE_REPLACED