See 3 planets in a line before sunrise 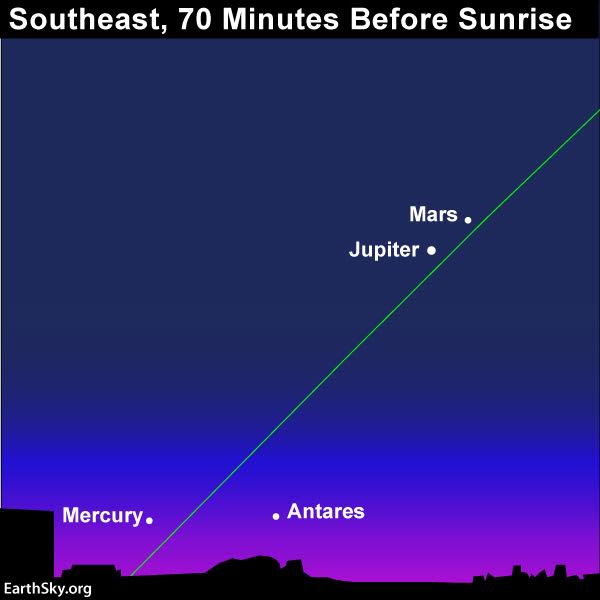 As 2017 draws to a close, three bright planets are lined up across the eastern sky before sunrise. In their order from the sunrise point upward, these worlds are surprisingly bright Mercury, dazzling Jupiter, and modesty-bright Mars. Draw an imaginary line from the red planet Mars through the king planet Jupiter to find Mercury, the solar system’s innermost planet, near the sunrise point on the horizon.

As Earth spins under the sky, Mercury is the last planet to rise into the morning sky, coming up just above your sunrise point as predawn darkness gives way to morning twilight. In the Northern Hemisphere, Mercury rises better than 90 minutes before the sun in late December. At temperate latitudes in the Southern Hemisphere, Mercury comes up about 70 minutes before sunrise. Although this apparition of Mercury favors the Northern Hemisphere, most everyone worldwide should be in a good position to view Mercury before sunrise for a week or so around the time 2017 ends, and 2018 begins.

Click here for recommended almanacs; they can tell you of Mercury’s rising time into your sky.

Technically, all 5 of the so-called bright planets – Mercury, Venus, Mars, Jupiter and Saturn – reside in the morning sky right now. By bright planet, we mean any planet that can be seen without an optical aid and which has been observed by our ancestors since time immemorial. Mercury, Jupiter and Mars are easy to see, but Venus and Saturn sit so close to the glare of sunrise that – while technically up before the sun – they aren’t presently visible.

Day by day, Venus will sink sunward while Saturn will climb upward toward Mercury. Venus will transition over to the evening sky on January 9, 2018, to be (again, only technically) the only bright planet in the January 2018 evening sky. Venus will be close to the sunset in January, though, and you might not actually see Venus until February 2018.

Two planetary conjunctions will occur in the January morning sky. For reference, the moon’s diameter spans approximately 1/2o of sky. Watch for Mars to swing less than 1/4o south of Jupiter – half a moon-diameter – on January 7; the moon itself sweeps past these planets a few days later (see chart below). Then Saturn will pass a bit more than 1/2o north of Mercury – about one moon-diameter – on January 13. At that time, Saturn and Mercury will be close to the sunrise and possibly hard to see; binoculars will help.

Yes, the wandering planets will be a sight to behold in the morning sky for the next few weeks!

Bottom line: As 2017 draws to a close, and 2018 begins, draw an imaginary line from the red planet Mars through the king planet Jupiter to find elusive Mercury near the sunrise point on your horizon.

Thank you! Your submission has been received!
Oops! Something went wrong while submitting the form.
END_OF_DOCUMENT_TOKEN_TO_BE_REPLACED