Dates and times of moon phases in 2021

Moon phases are global events. The moon reaches the crest of any given phase – new, first quarter, full or last quarter – at the same exact moment for all of us. But our clocks say different times. All the dates and times above are given in the time system most commonly used by astronomers, Coordinated Universal Time (UTC). It’s essentially the same as Greenwich Mean Time, the date and time in Greenwich, England, at the 0-degree line of longitude.

Here’s how to translate UTC to your time zone.

Maybe an example will help. If you live in North America’s Central time zone, you have to subtract 6 hours from UTC (5 hours during Daylight Saving Time). Thus, the January 6 last quarter moon is at 3:38 a.m. Central Time and 9:38 UTC.

Astronomers call the period from one new moon to the next a lunation. It’s about 29.5 days. The four major moon phases of a lunation are new moon, first quarter, full moon, and last quarter. Every month will have all four of those phases, and some months will have one of those phases repeated. Depending on how the lunation lines up with the calendar month, you can have two full moons in a month, which means the second full moon of the month is a Blue Moon. There are no months with two full moons in 2021.

A less common definition of a Blue Moon is the third full moon in a season with four full moons. By this definition, the August 22, 2021, full moon will be a Blue Moon.

Another sort of moon beloved in popular culture is a supermoon. A supermoon can be a new or full moon. It happens when the moon is new or full, and also closest to Earth in its monthly orbit around us. A full supermoon will appear slightly larger than a normal full moon, though often not enough larger for the average observer to notice a difference. A minimoon happens when a new or full moon is farthest from Earth in its monthly orbit.

Different cultures in different time periods have given names to the full moons. Check out this list of full moon names and decide what name works best for the moon where you live. Or make up your own! The Back-to-School Moon in September is a favorite full moon (although maybe not for kids).

To learn more about moon phases, why they might look a bit different depending on where you are on the globe, and a quirky phenomenon called lunar libration caused by a wobble in the moon, follow the links! 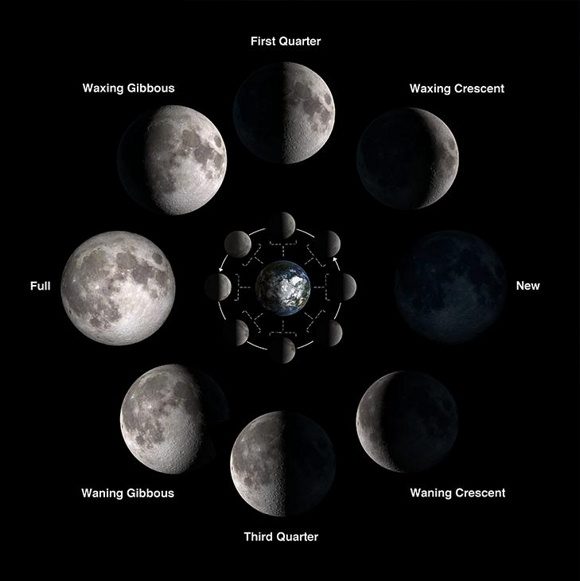 When the moon is growing larger from new to full it is waxing. When the moon’s phase is shrinking toward new it’s called waning. The last quarter moon can also be called the 3rd quarter moon. Image via NASA/ Bill Dunford. Click here for 4 keys to understanding moon phases.

Bottom line: Find out when the next new moon, first quarter moon, full moon or last quarter moon is in 2021. Get the date and time for your location and learn more about the phases of the moon.