Do we all see the same moon phase?

No matter where you are on the globe, we all see the same moon. So why do photos from a distant location sometimes look different from what you’re seeing? 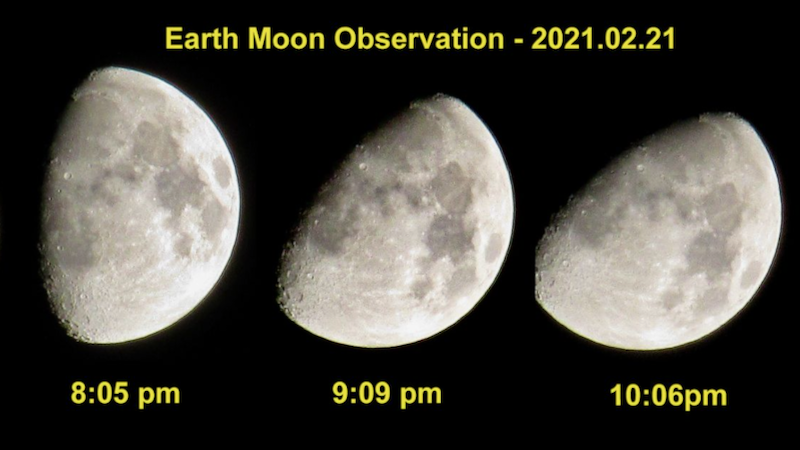 View at EarthSky Community Photos. | This is a crop of an image taken by Andy Bentley in Mountainview, California, showing the moon on a single night, February 21, 2021. See the full image here. The image shows how the moon’s orientation to your horizon changes as you watch it sweep across the night sky. As you might know, the moon’s orientation in your sky also changes as you move in latitude, northward or southward, on Earth’s globe. Thanks, Andy!

EarthSky lunar calendars show the moon phase for every day this year. A few left. Get one while you can!

Let’s take the second question first. The moon’s orientation with respect to your horizon shifts throughout the night because we live under a curved dome of sky. The illustration below – by Courtney Seligman – shows the curved line traveled by the stars and the moon, as they traverse Earth’s dome of night (or day). Professor Seligman was also trying to illustrate in this drawing that, although Earth’s rotation under the sky causes the stars and moon to move westward throughout the night, the moon’s motion in orbit is eastward.

The stars and moon travel on curved lines across Earth’s sky. That’s why the moon’s orientation with respect to your horizon changes throughout the night, as the photos above and below show. Illustration by C. Seligman. 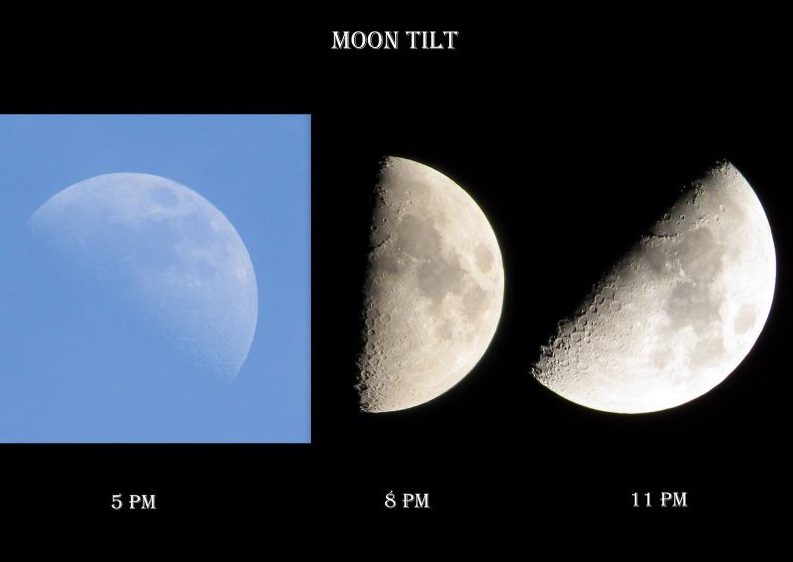 Bridget Borchert in Bloomington, Minnesota, captured this image in 2018. She wrote: “The tilt of the moon through the evening fascinates me.”

So the moon looks different throughout the night, due to the moon’s arcing path across our sky. But what about the moon phases? Are they the same for all of us?

From the Southern Hemisphere, meanwhile, a waxing moon (from new moon to full moon) increases its phase from left to right.

Can you see why that shift in your orientation on the globe would cause you to see the moon differently?

A final thought. What we on Earth call moon phases are really about sunrise and sunset on the moon. Astronomers call the line between light and dark on the moon the terminator line. That’s the line of sunrise or sunset on the moon, and it shifts, just as the line of sunrise and sunset on Earth is constantly shifting. Earth spins relatively fast, approximately once every 24 hours. The moon spins on its axis only once each earthly month, and its line of sunrise/set moves slowly. It’s wonderful fun to beg or borrow a telescope for a night when the moon is up … and watch for yourself over several hours as the shadows slowly shift on the moon, as the lunar sunrise or sunset slowly creeps across the moon’s face.

A great way to clear the mind! 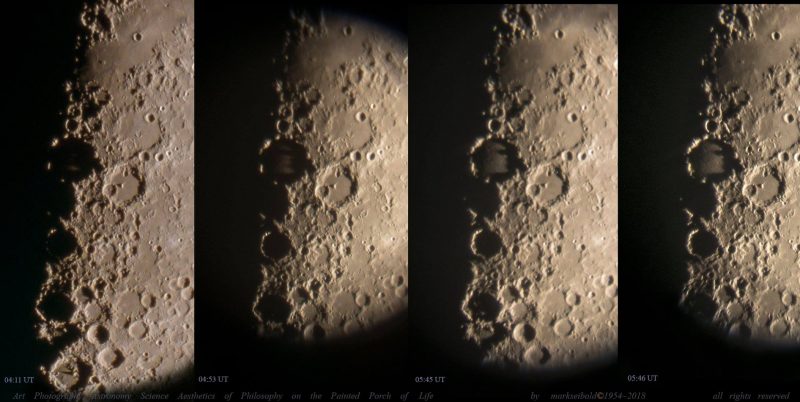 View larger. | Mark Seibold caught the progression of shadows and light on crater rims and floors – across about 1 1/2 hours – at lunar sunrise (along the terminator line, or line between light and dark on the moon) on a 7-day-old moon on April 22, 2018. The large crater here is 95-mile-wide (150-km-wide) Ptolemaeus. Celestron Nexstar 5i, with Sony NEX5R directly through telescope, and 12.4mm Meade eyepiece projection.

Flickr user Mike O’Hara kindly labeled the wealth of named features along the moon’s terminator line – line of sunrise – on a waxing moon. If you had a telescope, as the line of sunrise slowly shifts, you could watch over several hours to see the shadows playing along the rims of these and many other lunar mountains and craters.

Bottom line: The moon shows one phase to the Earth at the same time, but our different perspectives due to where we are on the globe can make the moon appear differently in our sky.