Posted by
Daniel Tennant
and
Deborah Byrd
and

In early 2012, researchers at MIT announced a design that might make concentrated solar power arrays more feasible and useful. Use of these multi-mirrored solar power production facilities has been hindered by the large areas of land they require. Yet the payoff might also be large, if we can get them right. Proponents suggest that concentrated solar energy plants could deliver up to a quarter of the world’s energy by 2050. In an effort to improve efficiency, a group at MIT led by Alexander Mitsos proposed to arrange the mirrors in a design based on the exquisite geometry of a sunflower’s florets. 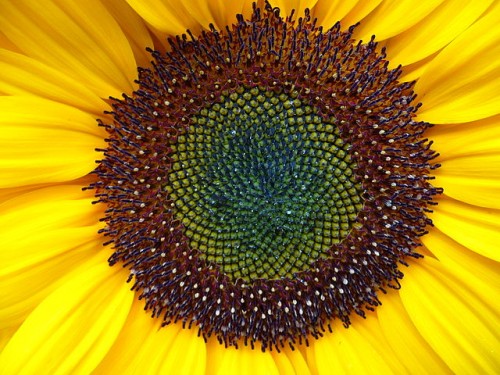 Mitsos’ team worked in collaboration with RWTH Aachen University in Germany to devise the design, which they say reduces the amount of land required to build a concentrated solar power plant, while increasing the amount of sunlight its mirrors collect.

The researchers looked to Europe’s first commercial concentrating solar power tower – the PS10 solar power plant, operating near Seville in Spain. The PS10 solar power plant has a 100-meter-high pillar. The pillar is surrounded by rows of more than 600 mirrors, each the size of half a tennis court. The mirrors track the sun throughout the day, and they concentrate sunlight on a reservoir of water in the central tower. The concentrated light is used to steam the water, turn turbines, and generate electricity — enough to power 6,000 homes, in the case of the PS10 tower.

So far, so good, but the design has its flaws. The main issue with this type of plant is how to direct the maximum amount of reflected sunlight toward the reservoir. One issue is that you want to minimize the amount of reflected light that simply hits the back of an adjacent mirror apparatus, instead of traveling to the tower. The obvious thing to do is to space out each individual mirror at a greater distance. However, the more spaced out the mirrors are, the farther away from the tower they are. This results in less power reaching the tower as an appreciable amount of the reflected rays simply gets absorbed in the air. So, you want to arrange the mirrors as close to the tower as possible without them getting in the way of each other.

Nature has long since solved a similar puzzle for one of its original sun catchers, the sunflower. A sunflower’s florets, the tiny pedals found in the inner part of the flower, are arranged in curves known as Fermat’s Spiral. These florets are spaced in increments based on the golden ratio, thus ensuring not only their aesthetic beauty, but also that the florets are never found directly behind each other.

Alexander Mitsos’ team wants to apply this same design to the mirrors surrounding solar towers. In his recent paper, published in the journal Solar Energy, Mitsos shows that implementing the sunflower design will only raise efficiency a modest 0.36%, but drastically reduce the amount of land one needs for the plant by 15.8%. This is the genius of utilizing Fermat’s Spiral in a design for a concentrated solar power tower, like the PS10 tower near Seville. The mirrors can be placed close together without blocking one another!

Bottom line: Alexander Mitsos and his team at MIT, working with RWTH Aachen University in Germany, have created a new design for concentrated solar power mirror arrays, based on the geometry of a sunflower’s florets. The scientists looked to an existing concentrated solar power plant – the PS10 tower near Seville, Spain – and said their new layout would increase the plant’s efficiency slightly, while dramatically reducing the amount of land needed for the mirror array.

Thank you! Your submission has been received!
Oops! Something went wrong while submitting the form.
END_OF_DOCUMENT_TOKEN_TO_BE_REPLACED

What causes paper to yellow as it ages?

Advances in understanding how insects fly