A moon rock collected by Apollo astronauts during the first moon landing is enshrined in a stained-glass window – known as the Space Window – in the Washington National Cathedral. 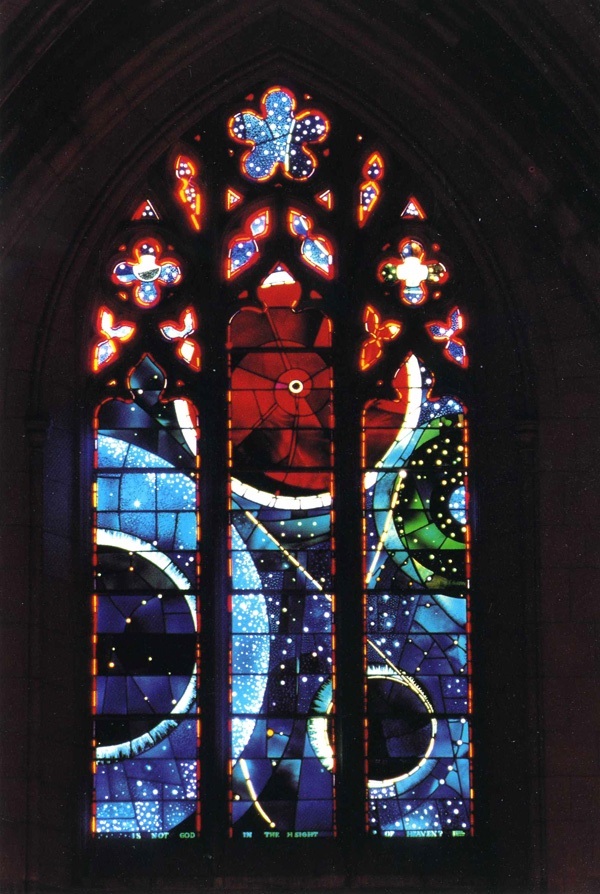 The Space Window holds a lunar rock at the center of the red sphere. Image via My Modern Met.

See the black dot in the center of the big red circle in this stained glass window? It’s a moon rock from the Apollo 11 mission, the 1969 mission that landed the first humans on the moon. This Space Window, as it’s called, is in the Washington National Cathedral in Washington, D.C.

Space enthusiasts visiting Washington, D.C., tend to head directly to the Smithsonian National Air and Space Museum, where they can see Neil Armstrong’s spacesuit, an Apollo lunar module, the Space Race gallery and more. But just five miles to the northwest – at 3101 Wisconsin Ave NW – lies another iconic D.C. building, the Washington National Cathedral, with another piece of space memorabilia: a lunar rock set in a stained-glass window.

Known familiarly as the Space Window, the unique design is one of the most beloved and most photographed parts of the cathedral.

Frances Bowes Sayres Jr., dean of the Washington National Cathedral during the Apollo years, teamed up with Thomas Paine, the administrator who led NASA during the first seven Apollo moon missions. They came up with the idea of the Space Window as a symbol of our spiritual and scientific connections to the cosmos.

The lunar sample chosen for the stained-glass window came from the Apollo 11 mission and was originally part of a 2-pound sample called 10057, a piece of which also sat in President Bill Clinton’s Oval Office. Astronauts Neil Armstrong and Buzz Aldrin collected it as part of more than 47 pounds of dirt and rock samples from the Sea of Tranquillity, where they landed. 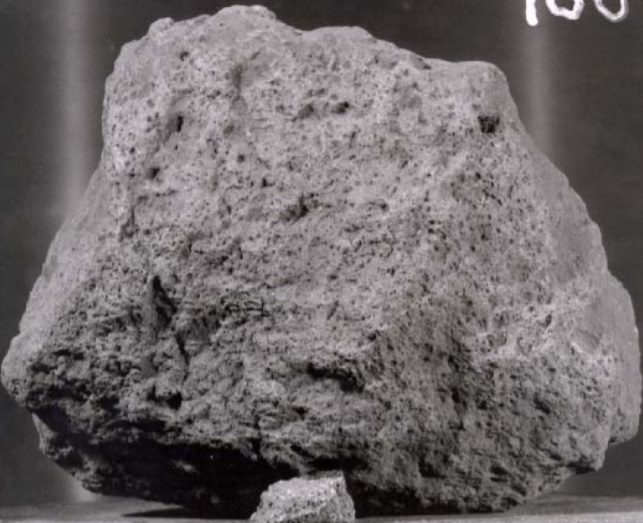 This lunar sample, known as 10057, was collected during Apollo 11 and later sliced into pieces. Image via NASA.

Aldrin and Armstrong, along with the third Apollo 11 astronaut Michael Collins, presented the moon rock to Washington National Cathedral on July 21, 1974, five years and a day after they plucked the mineral from the surface of the moon. It is the only moon rock NASA ever gave to a nongovernmental institution.

St. Louis artist Rodney Winfield created the stained-glass window using inspirations from photographs taken during the Apollo 11 mission. A white path represents the track of the spacecraft between dark orbs, and tiny stars dot the heavens. A quote from the Bible – Job 22:12 – runs along the base of the window: “Is not God in the height of Heaven?”

Winfield’s official title for the piece was Scientists and Technicians Window. 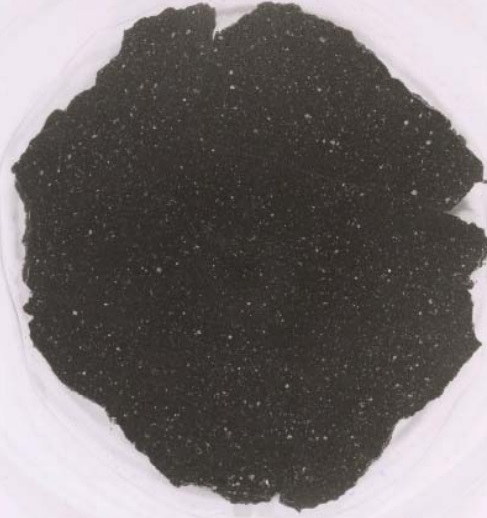 This thin slice of moon rock 10057 became part of a stained-glass window in Washington National Cathedral. Image via NASA.

The 2 3/8-inch sliver of moon rock is easily found at the center of a small white circle high up in the window. The fragment of basalt is preserved in the window thanks to an inert nitrogen chamber sealed inside tempered glass and steel. 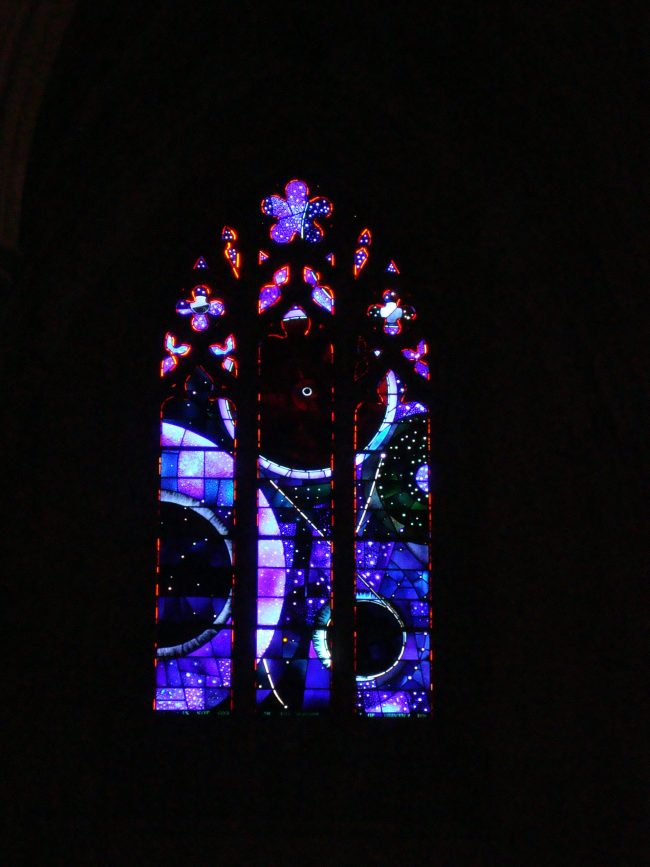 The Space Window glows from outside light as seen from inside the darkened cathedral. Image via Kelly Whitt.

The Space Window isn’t the only space-related object in Washington National Cathedral. The only feature of the cathedral more popular than the Space Window? Darth Vader. The gargoyle-like grotesque stands guard near the top of the north-west tower and practically requires a telescope to see. The existence of the Darth Vader sculpture is thanks a contest won by a schoolchild from the 1980s.

To find the Space Window inside Washington National Cathedral, pick up a brochure or download one from their website. The first labeled item of cathedral highlights is the Space Window. As you stand in the nave and face the altar, the Space Window is positioned near the center of the wall on the right and looks distinctly dissimilar from the other windows, which feature people in various activities. 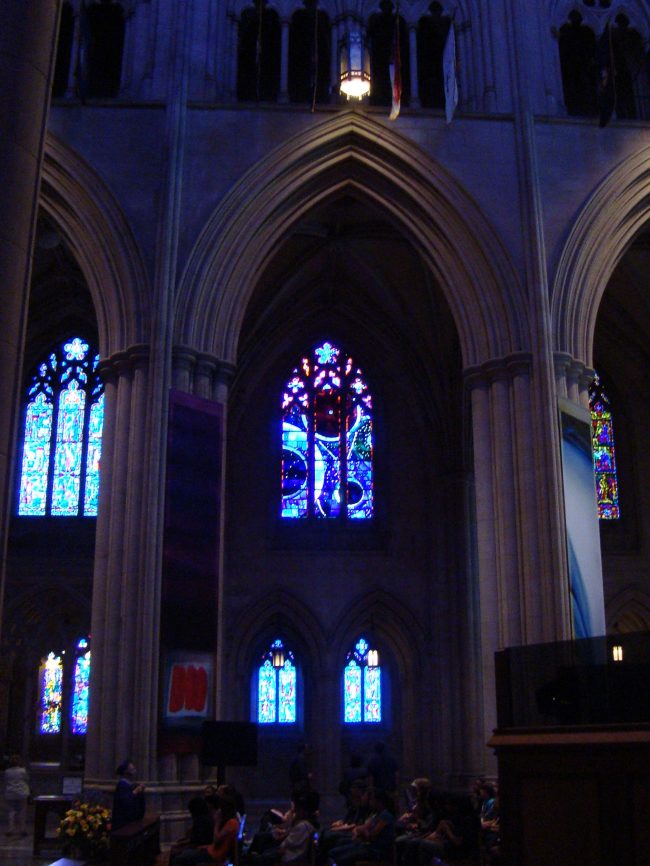 The Space Window can be found near the center of the nave on the right-hand side of Washington National Cathedral. Image via Kelly Whitt.

Bottom line: A moon rock collected by Apollo astronauts during the first moon landing is enshrined in the Washington National Cathedral as a centerpiece of one of its stained-glass windows. You can visit this work of science and art, popularly known as the Space Window, in the United States capital city.

EarthSky lunar calendars show the moon phase for every day in 2021. Selling out fast. Get one while you can!