A lunar sample collected during Apollo 17, the final mission to the moon, is now on display in President Biden’s Oval Office. 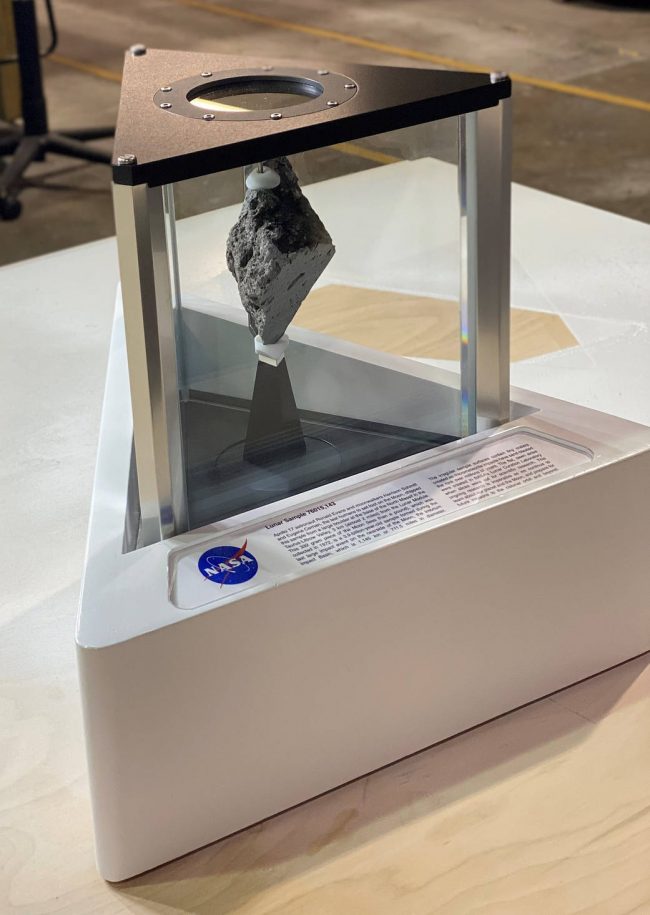 This moon rock – from the Apollo 17 mission to the moon in 1972 – now sits on a bookshelf in President Joe Biden’s Oval Office. Image via NASA.

Like any other employee starting a job at a new office, a new U.S. president can decorate the Oval Office with photos, artwork and other decorative items of his choice. The 46th president, Joe Biden, has chosen to incorporate a moon rock into his environs. The moon rock, collected in 1972 during Apollo 17, the last lunar mission, is meant as a symbol of earlier generations’ ambitions and accomplishments. It also represents support for America’s current Moon to Mars exploration approach.

The Biden administration requested the moon rock, which was provided by the Lunar Sample Laboratory Facility at NASA’s Johnson Space Center.

Speaking of the moon – EarthSky lunar calendars are on sale now. We’re guaranteed to sell out. Get one while you can!

The prism-shaped case in which the moon rock resides is labeled Sample 76015,143 and inscribed with the following:

Apollo 17 astronaut Ronald Evans and moonwalkers Harrison Schmitt and Eugene Cernan, the last humans to set foot on the moon, chipped this sample from a large boulder at the base of the North Massif in the Taurus-Littrow Valley, 3 km (almost 2 miles) from the Lunar Module. This 332 gram piece of the moon (less than a pound), which was collected in 1972, is a 3.9-billion-year-old sample formed during the last large impact event on the nearside of the moon, the Imbrium Impact Basin, which is 1,145 km or 711.5 miles in diameter. You can see this impact basin for yourself during the next full moon. Look for Mare Imbrium as a very large dark circular shape in the upper left portion of the moon: this giant lava plain covers the floor of one of the largest craters in the entire solar system. 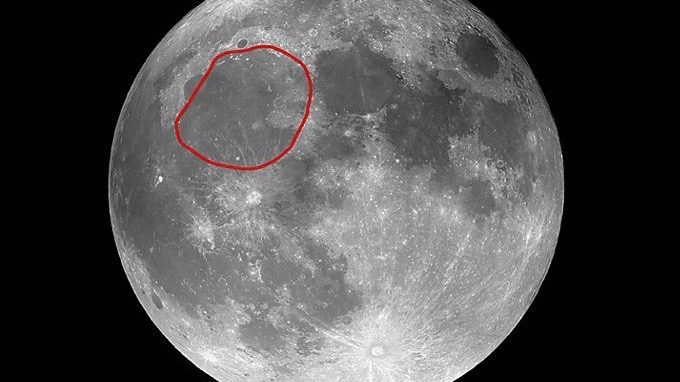 The lunar Mare Imbrium, or Sea of Rains, via Pete Lawrence’s Moon guides.

The irregular sample surfaces contain tiny craters created as micrometeorite impacts have sand-blasted the rock over millions of years. The flat, sawn sides were created in NASA’s Lunar Curation Laboratory when slices were cut for scientific research. This ongoing research is imperative as we continue to learn about our planet and the moon, and prepare for future missions to the cislunar orbit and beyond.

Harrison Schmitt was the only geologist to visit the moon. He and Eugene Cernan collected the 1972 rock samples and were the last people to walk on the moon. Many hope that, in the coming years, NASA’s ongoing Artemis mission will change that. Artemis originally had the goal of placing the next man and first woman on the moon by 2024. New technologies being developed for the mission did not progress as rapidly as hoped over the past several years, so that date now looks unlikely, but many are still hopeful the mission will continue to move forward under Joe Biden.

Read more: How will the US space program fare under Joe Biden?

President Bill Clinton also had a piece of the moon in his Oval Office. His lunar sample was labeled 10057,30 and was presented to him in 1999 by the astronauts who collected it: Buzz Aldrin, Neil Armstrong, and Michael Collins. Clinton’s moon rock was cut from a larger chunk labeled 10057; a different sample cut from the same chunk was placed into a stained glass window in the Washington National Cathedral in 1974.

President Richard Nixon presented lunar samples to all 50 states plus many nations and territories, although many of those samples have since gone missing.

Back in the heyday of the Apollo program, everyday Americans could check out moon rocks for educational purposes. The program continues today, but with much more stringent guidelines. Colleges and universities with geoscience programs can request samples for use by advanced geology students in petrology or microscopic petrography courses. The loan is limited to a two-week period.

Bottom line: A lunar sample collected during Apollo 17, the final mission to the moon, is now on display in President Biden’s Oval Office.

Read more from the Washington Post: A look inside Biden’s Oval Office