What’s the birthstone for December?

If you were born in December, you’ve got 2 birthstones, turquoise and zircon. 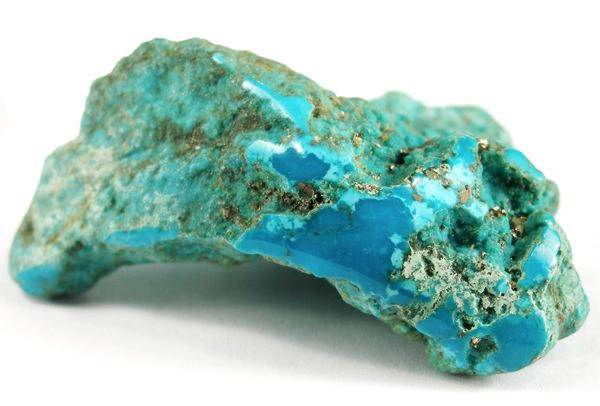 A piece of raw turquoise, polished on one side to show variations in color and dark inclusions, from a mine in Sonora, Mexico. Image via Robert Lavinsky/ Mindat.org/ Wikimedia Commons.

The month of December has two birthstones: turquoise and zircon.

Turquoise is considered by some to be a symbol of good fortune and success, believed to bring prosperity to its wearer.

In the language of chemists and geologists, turquoise is known as “copper aluminum phosphate.” Turquoise is often found in weathered igneous rock that contains copper minerals, where it crystallizes in veins and nodules. The gemstone usually develops in rock near water tables, located in semiarid and arid environments. The chemicals in turquoise come from adjacent rock, leached out by rain and groundwater.

Turquoise is a relatively soft gemstone, and can be easily scratched and broken. This porous opaque stone is easily discolored by oil and pigments, and changes color when it loses some of its water content. A sky blue shade in turquoise is due to the presence of copper, while iron gives it a greener tone. Ochre and brown-black veins in the stone occur during the formation of turquoise, caused by inclusions from nearby rock fragments or from oxide staining. The most valued variety of turquoise is an intense sky blue color, like the color of a robin’s egg. Hard, relatively non-porous compact stones have the best appearance because the stone can be finely polished. Pale and chalky varieties, however, are sometimes impregnated with oil, paraffin, liquid plastic or glycerin to give it a good polish. 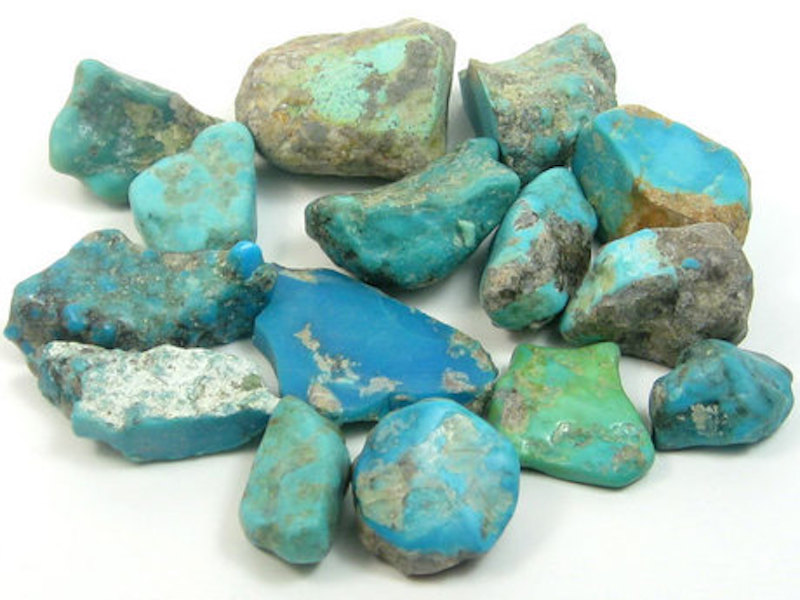 This stone can be found in Armenia, Kazakhstan, Australia, Tibet, China, Mexico, Brazil, Iran, Egypt and the United States. In Iran, where some of the best stones are found, turquoise is the national gem. Several states in the American southwest – Nevada, Arizona, Colorado, New Mexico and California – are primary producers of turquoise. Many of the specimens have a light color, and are porous and chalky. Only about 10% are of gem quality.

Its name is believed to originate from the French phrase “pierre turquoise,” meaning “Turkish stone,” because turquoise was brought to Europe by Venetian merchants who first acquired it in Turkish bazaars. It is considered by some as a love charm. When received as a gift, the turquoise symbolizes a pledge of affection. Shakespeare used this lore in “The Merchant of Venice.” In it, Leah gave a turquoise ring to Shylock when he was a bachelor, hoping it would win his affections so he would ask her to marry him. In Russia, the turquoise is popularly used in wedding rings.

Turquoise is one of the earliest known stones to be used in jewelry. Pharaohs of Early Egypt wore them. A tomb excavated in 1900 contained the mummified remains of Queen Zer, who ruled in 5500 B.C.E.; found on her arm were four magnificent turquoise bracelets. Beads dating back to 5000 B.C.E. have been found in Mesopotamia (now Iraq). In ancient Persia, now Iran, turquoise was the national gemstone, adorning thrones, daggers, sword hilts, horse trappings, bowls, cups, and ornamental objects. Senior officials wore turquoise seals decorated with pearls and rubies. In the seventh century C.E., turquoise pieces inscribed with passages from the Quran and Persian proverbs were valued amulets. It was used as jewelry in ancient Siberia, around the fifth and sixth centuries B.C.E.

During the Middle Ages, turquoises were popularly used as decoration of vessels and manuscript covers. And it was again popular as jewelry during the Renaissance. It has also been found in ancient burial sites in Argentina, Bolivia, Chile, Peru, Mexico and Central America. The Incas crafted beads and figurines out of it, and the Aztecs made pendants and ritual masks.

Turquoise has a rich history in the American southwest. Native Americans have been using this gemstone to create jewelry and ornamental pieces for the past several thousand years. It was called “Chal-cui-hui-tal”, meaning “the highest and most valued thing in the world.” The Zuni, Hopi, Pueblo and Navajo Indians made magnificent necklaces, ear pendants and rings. The blue in turquoise symbolized the heavens, and green symbolized the Earth. The stones were used by medicine men to work charms. The Navajo believed that turquoise pieces, thrown into a river while offering a prayer to the rain god, would bring much needed rain. Apache lore held that a turquoise attached to a bow or gun would ensure accurate aim.

There are many superstitions associated with the turquoise. In the third century, it was believed to protect its owner from falling off a horse. A change in color revealed the infidelity of a wife. Twelfth century Arabian writings said “The turquoise shines when the air is pure and becomes pale when it is dim.” They also believed that its color changed with the weather. Persians said that the reflection of the new moon on a turquoise stone brought good luck and guarded against evil. It was said to have a healing effect on the eye; merely looking at it strengthened the eye, while placing it on an inflamed eye brought a cure. A 15th century philosopher attributed its change of color to its ability to attract poisons. It was a barometer of its user’s health, turning pale in illness and losing color in death, yet regaining its original beauty in the hands of a new and healthy owner. 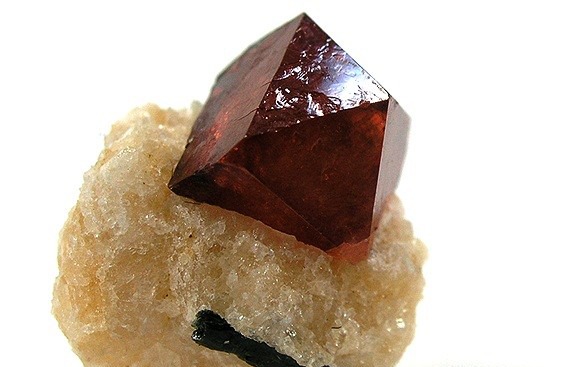 The alternate birthstone for December is the zircon.

Zircon forms as a colorless to pale yellow or green crystal containing small amounts of thorium or uranium. Over vast spans of geologic time, forces work within the zirconium silicate crystals to change its molecular structure and color. The uranium and thorium inclusions emit radiation that alters the original crystal structure. A glass-like material is formed, with colors of red to brown, orange and yellow.

The mineral zircon, known as zirconium silicate, is commonly found as a minor constituent in igneous rock such as granites and some kinds of metamorphic rock. Gem quality zircon stones are rare. These gemstones are formed mainly in pegmatites (coarse-grained igneous rock) and in fissures. But due to weathering of the gem-bearing rocks, most zircons are found in alluvial and beach deposits.

A new blue color for zircon, called “starlight blue,” was created by heating golden brown or yellow zircon in the 1920s. From “Gems and Crystals” by Anna S. Sofianides and George E. Harlow:

In the 1920s, a new blue gemstone suddenly appeared in the market. Endowed with spectacular brilliance, it was an immediate hit.

The gems were zircons, normally brown to green, but never before blue. George F. Kunz, the legendary Tiffany gemologist, immediately suspected trickery; not only were there extraordinary stones available in abundance but available all over the world! Upon Kunz’s behest, a colleague made inquiries during a trip to Siam (Thailand) and learned that a large deposit of unattractive brown zircon had stimulated color-improvement experimentation by local entrepreneurs. Heating in an oxygen-free environment had turned the drab material into “new” blue stones, which were sent to outlets worldwide. When the deception was revealed, the market simply accepted the information, and the demand for the new gems continued unabated.

The most prized zircon is the red gemstone, which is rare. The pure intense blue and sky blue varieties are also highly valued, while the colorless, orange, brown and yellow stones are less expensive. Many zircons on the market are heat treated, and sold as blue, golden brown or colorless stones. Colorless zircons are the best imitators of diamonds, in appearance only, with a brilliant fire that is almost as dazzling as the real thing. However, the resemblance is superficial. Zircon is a brittle stone, easily broken with a well-placed knock, due to internal stresses in the crystal caused by radiation damage and heat treatment. But despite its frail disposition, the stone is still highly valued because of its stunning beauty. 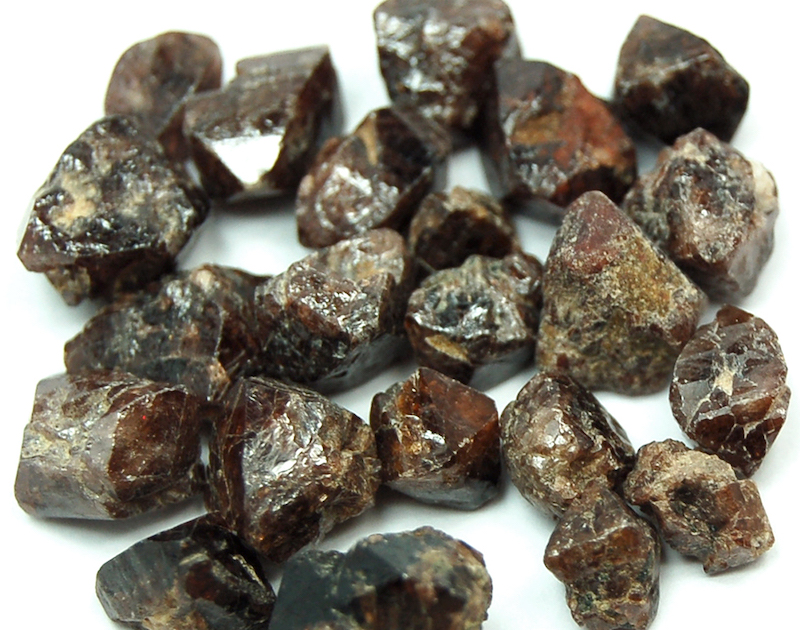 Major sources of zircon are the Chanthaburi area of Thailand, the Palin area of Cambodia and the southern part of Vietnam near the Cambodian border, where gemstones are found in alluvial deposits. Bangkok is well-known as a major center for processing zircons, where everything from heat treatment, cutting and marketing is carried out. Another important source is Sri Lanka, well known for a colorless variety of zircon called the “Matura diamond.” The gemstones are also found in Burma, France, Norway, Australia and Canada.

Its name is probably derived from the Arabic words “zar” and “gun.” meaning “gold” and “color.” The gemstone is found in a wide range of colors, and possesses great brilliance, fire and clarity.

The hyacinth and jacinth, reddish-brown and orange-red varieties of zircon, were a favorite stone of ancient Arabs and were even mentioned in the famed “Arabian Nights.”

Green zircon was among the stones of the “Kalpa Tree” of the Hindu religion, where it represented the tree’s foliage. This tree was a symbolic offering to the gods. Hindu poets of the 19th century described it as part of a glowing ensemble of precious stones that also included sapphires, diamonds and topaz.

Zircon was regarded as a protective amulet for travelers in the 11th century, safeguarding them from disease, injury and insomnia, as well as assuring a cordial welcome wherever their travels might take them. The gem was also believed to hold magic powers to fight evil spirits. During the 14th century, zircon was popular as a safeguard against the Black Death, the great plague that wiped out a quarter of the population of Europe. The stone was believed to possess healing powers. It was prescribed to insomniacs to induce sleep, used as an antidote against poison, and as an aid to digestion.