Beware the Ides of March? Why?

The Ides of March are March 15. We in modern times probably wouldn’t know about them – or know we’re supposed to beware of them – if it weren’t for William Shakespeare.

Beware the ides of March.

What man is that? Set him before me, let me see his face.

When the soothsayer repeats his warning, Caesar dismisses him, saying:

He is a dreamer; let us leave him. Pass.

Two acts later, Caesar is assassinated on the steps of the Senate.

In the play – and in reality – Julius Caesar was indeed assassinated on the ides of March – March 15 – in the year 44 B.C. 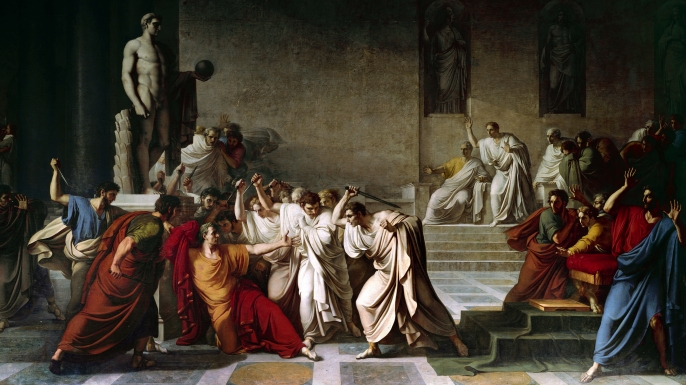 The soothsayer tells Caesar to beware the Ides of March … but Caesar doesn’t listen. Image via History.com.

The word Ides derives from a Latin word, meaning to divide. The Ides were originally meant to mark the full moons, but because calendar months and lunar months were different lengths, they quickly got out of step.

The Romans also had a name for the first day of every month. It was known as the Kalends. It’s from this word that our word calendar is derived.

In fact, our modern calendar is very much like the one that Julius Caesar enacted the year before his death. It had 365 days and 12 months each year. It even took into account the fact that Earth’s orbit around the sun isn’t a whole number of days, by adding a leap day every few years.

Bottom line: The Ides of March corresponded to March 15 in ancient Rome. We remember them thanks to William Shakespeare’s play Julius Caesar.