What is the Sickle in Leo?

The Sickle in Leo is an easy-to-spot backward question mark shape made of stars that marks the head and shoulders of the constellation of the lion. The moon sometimes passes in front of the Sickle’s brightest star, Regulus. 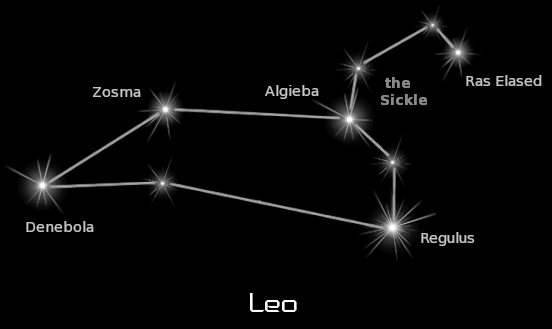 The Sickle in Leo looks like a backward question mark and represents the head and shoulders on the lion. Regulus is the brightest star in Leo and the Sickle. The star Ras Elased is also known as Algenubi. Image via Derekscope.

The star pattern known as The Sickle in the constellation Leo the Lion looks like a backward question mark. It’s what’s called an asterism, a small and recognizable grouping of stars, one of the easier patterns to spot in the night sky. Leo’s Sickle, which represents the head and shoulders of the Lion, is formed by six stars: Epsilon, Mu, Zeta, Gamma, Eta, and Alpha Leonis (the last one is better known as Regulus, or Cor Leonis, the Lion’s Heart).

The Sickle is a hallmark of spring skies in the Northern Hemisphere, but you can see it at other times of the year, too. Right now, around late January and early February, watch for it in the east in mid to late evening. 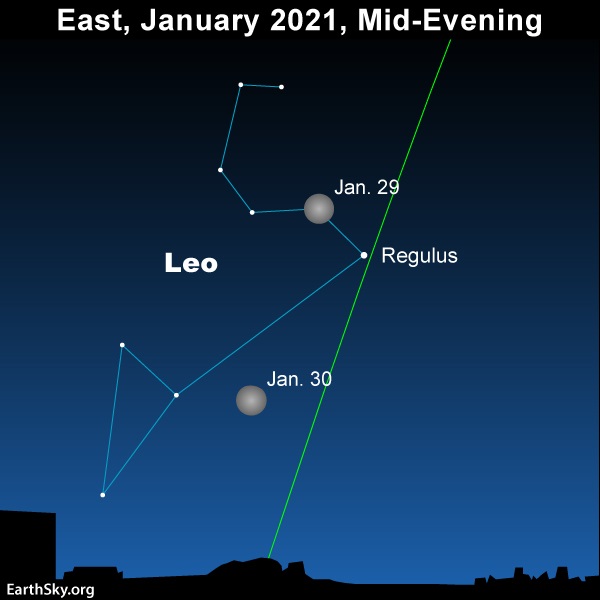 On January 29 and 30, 2021 – before going to bed – look in a general eastward direction to see the brilliant waning gibbous moon pairing up with Regulus, the brightest star and Heart of the Lion in the constellation Leo. From most places worldwide, you’ll see the moon and Regulus by mid-evening, that is, midway between your local sunset and midnight. See the backwards question mark pattern of which Regulus is a part? That’s The Sickle. Read more.

Sickles used to be standard farm equipment, used in reaping. The sickle may be most recognizable in flags and symbology of the hammer and sickle, which were the tools that represented the Soviet Union for many years. Nowadays it’s easier to point out the “backward question mark” to stargazers when targeting the Sickle.

The Sickle in Leo is named for an old harvesting tool. Image via Petr Brož/ Wikimedia Commons.

The Sickle’s home constellation of Leo the Lion is one of the few whose pattern of stars looks quite a bit like what it was named for. The stellar lion has been identified for ages. Ancients Persians, Turks, Syrians, Hebrews and Babylonians all saw a lion with its triangular body at the rear and great head and shoulders in the sickle-shaped backwards question mark pattern. Greeks saw Leo as the great Nemean Lion, killed by Hercules as the first of his 12 labors. Leo was important to Egyptians because the annual flooding of the Nile occurred when the sun was in front of the stars of the Lion.

To get to know the Sickle a bit better, let’s start at the most prominent of its stars, Alpha Leonis, or Regulus, marking the bottom of the Sickle or the period in the backward question mark. Regulus is the brightest star in not only the Sickle but the constellation of Leo and was given its name by Copernicus. One of the few stars with a name that comes from Latin, Regulus means little king. The star is also called Cor Leonis, the Lion’s Heart. 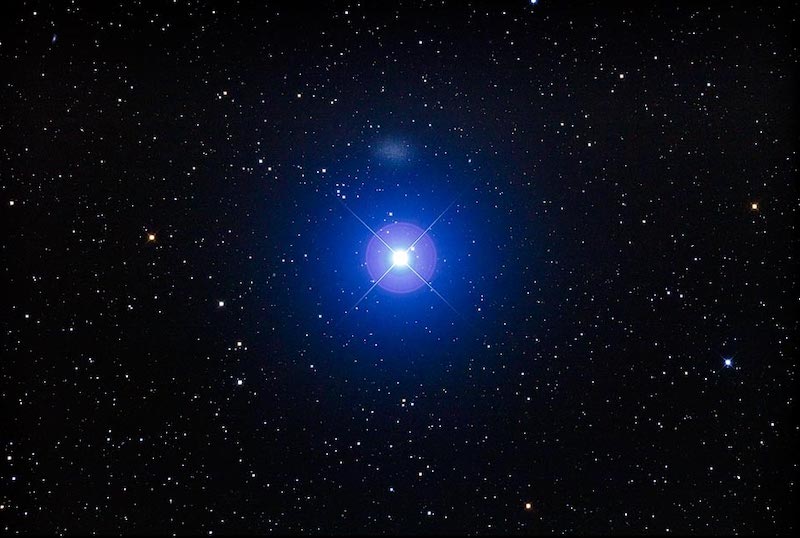 An image of Regulus obtained with a small telescope. The faint smudge above it is the dwarf galaxy Leo I. Image via Fred Espenak.

Regulus is magnitude 1.3, making it the faintest of 1st-magnitude stars and the 21st-brightest star overall. Regulus lies 79 light-years away and is estimated to be about 250 million years old. The star is classified as a dwarf with a bluish white hue. Regulus has the fastest rotation of any 1st-magnitude star at about 200 miles per second (317 km/sec), which contorts its shape from spherical to bulging. The speed and shape affect the star’s temperature, with the equator registering at about 10,200 kelvin (18,000 degrees Fahrenheit) but the poles at 15,400 K (27,999 F).

Regulus is about 360 times brighter than the sun while being less than four times the size of the sun.

A fun fact about Regulus that is particularly noteworthy to stargazers is that it’s the closest star to the ecliptic, or path of the planets and moon across our sky. Because of this, Regulus is often visited by the moon and planets, and sometimes the moon even occults, or passes in front of the star, in a type of eclipse. 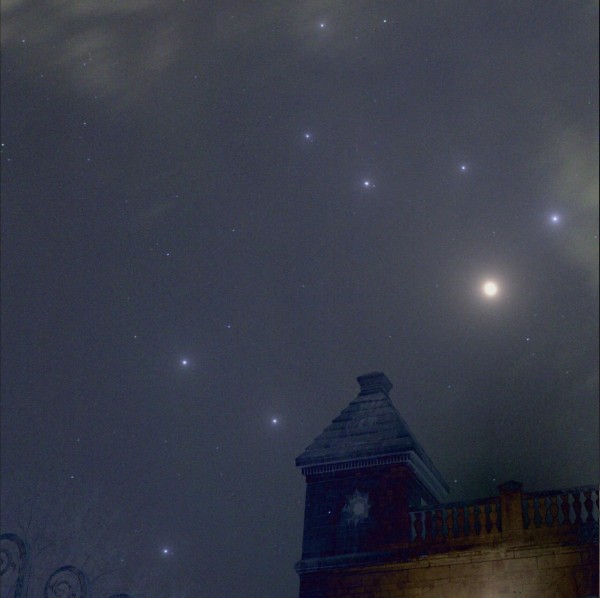 EarthSky Facebook friend VegaStar Carpentier took this wonderful photo of Mars in the constellation Leo in April 2012. The Sickle of Leo is easy to see, and because Regulus is near the ecliptic, it is often visited by planets and the moon.

The star above Regulus in the Sickle is Eta. It’s the only star in Leo without a proper name, though a few sources list Al’dzhabkhakh. Eta is a 4th-magnitude star (magnitude 3.5) and 1,270 light-years away. At such a great distance, it’s no surprise to learn that it’s 28 times larger than the sun, allowing us to see it from across the great expanse. Eta is a multiple star system that’s classified as a white supergiant. Also close to the ecliptic, the star is occasionally occulted by the moon, and it winks out twice, showing that it is not a single star.

The next star up in the Sickle is Algieba (or Gamma Leonis), located in the Lion’s mane. Algieba is the second-brightest Sickle star and shines at magnitude 1.9 from 90 light-years away. The star is not one but two, separated by 4 arc seconds. The two stars are two different classifications, making them appear a fantastic orangish-yellow and yellowish-green through telescopes. The famous Leonid meteor shower in November radiates from a point near Algieba. In 2010, a planet was discovered around the primary star of the double star system. The planet has a mass 8.8 times that of Jupiter but an orbit closer to its home star, like Earth is to the sun.

Continuing up the Sickle we come to Adhafera (or Zeta Leonis), which marks the back of Leo’s head and part of the Lion’s mane. The giant star is magnitude 3.4 and 260 light-years away. We are seeing it at a short stage in its life cycle. Adhafera was a dwarf and will eventually become a different class of giant with a diameter larger than Earth’s orbit. Adhafera’s name means “locks of hair,” which works for a star in a lion’s mane, even though it was accidentally given to this star instead of one in the neighboring constellation of Berenice’s Hair (Coma Berenices).

Rasalas (or Mu Leonis) is the next star up marking the top of the Lion’s head. Rasalas means the eyebrows. This star shines at magnitude 3.8 and lies 150 light-years away. A super-metal-rich giant, it has about 70 percent more iron than the sun. This may be because Rasalas is expanding and eating its metal-rich inner planets.

The last star in the Sickle is Algenubi (or Epsilon Leonis). Algenubi is the fifth-brightest star in Leo, and its name means the southern star of the Lion’s head. Algenubi shines at magnitude 2.9, and it lies 247 light-years away. This puts the star three times farther away from us than Regulus. Algenubi is transitioning from a main sequence star to a red giant.

Bottom line: The famous Sickle in Leo is an easy-to-spot backward question mark shape that marks the head and shoulders of the constellation of Leo the Lion. Leo’s brightest star is Regulus. Find names and information about other stars in the Sickle here.