Could cockroaches survive a nuclear apocalypse?

Cockroaches have a reputation for resilience, even when it comes to surviving a nuclear bomb and radiation – but will they really outlive us all? 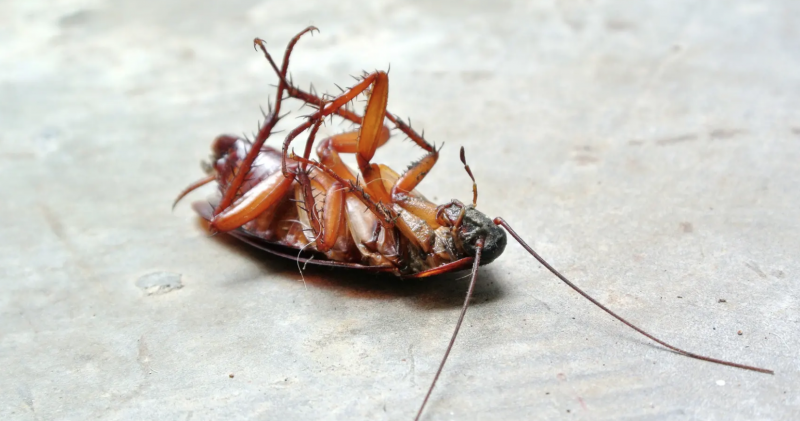 By Kate Stanton, University of Melbourne

The 2008 film Wall-E depicted Earth as a post-apocalyptic wasteland with nothing on it but the abandoned remnants of human society and a forlorn, trash-compacting robot. The titular robot’s only living company is a surprisingly adorable pet cockroach named Hal, Pixar’s nod to the popular myth that cockroaches will outlive us all.

Wall-E has a look at Hal. Watch a scene from the movie. Image via Disney movies and facts.

But the creepy crawlies do have a reputation for resilience, likely contributing to the belief that they could even survive a nuclear bomb and subsequent radiation exposure.

Media reports have suggested that the cockroach myth stems from rumors that insects thrived in the aftermath of the atomic bombings of Hiroshima and Nagasaki.

But University of Melbourne’s Tilman Ruff, a Nobel laureate who studies the health and environmental consequences of nuclear explosions, says he has yet to see any documented evidence that there were cockroaches scuttling through the rubble. Ruff said:

I’ve certainly seen photographs of injured people in Hiroshima that have lots of flies around, and you do imagine some insects would have survived. But they still would have been affected, even if they appear more resistant than humans.

Mutations have been found in animal populations within the original 1,004-square-mile Chernobyl exclusion area. Image via University of Melbourne/Getty Images.

The U.S. TV series Mythbusters tested the cockroach survival theory in 2012 when they exposed cockroaches to radioactive material. The roaches survived longer than humans would have, but they all died at extreme levels of radiation.

University of Melbourne evolutionary biologist Mark Elgar says the results of the Mythbusters test are incomplete because they only looked at how many days the cockroaches lived after exposure. They didn’t look at the cockroaches’ ability to produce viable eggs, thus ensuring the continued survival of the species. Elgar said:

There is some evidence that they seem quite resilient to gamma rays, although they are not necessarily the most resistant across insects.

You could argue that some ants, particularly those that dig nests deep into the ground, would be more likely to survive an apocalypse than cockroaches.

Previous tests of insects subjected to radiation found that cockroaches, though six to 15 times more resistant than humans, would still fare worse than the humble fruit fly.

Elgar says the feral American and German species of cockroach – the ones you might recognize from your kitchen nooks and crannies – have given the rest of the species a bad rap. He said:

Their habit of basically acting as an unpaid house cleaner horrifies people.

There are more than 4,000 species of cockroaches, however, including native Australian cockroaches marked by iridescent colors and patterns. Elgin said:

Some of the Australian bush cockroaches are really lovely looking insects, which might change people’s perspectives. The Mardis Gras cockroach, for example, has got these lovely yellow patterns on its plates and bright blue legs with little black spots.

The Mardi Gras cockroach, is a species of bush cockroach found in Australia. Image via University of Melbourne/Getty images.

Cockroaches breed quickly, lay large numbers of eggs and are harder to kill with chemicals than other household insects – all traits that could contribute to the popular belief that they could withstand anything, even a nuclear bomb. Elgar said:

They are quite well defended. If you try and squish a cockroach it usually gives off an unpleasant smell that acts as a pretty effective deterrent for anything attempting to capture them. They’re flat, so they can escape into places you can’t easily access.

Cockroaches feed off the detritus of other living organisms, however; so Professor Elgar questions whether they would be able to thrive without humans and other animals.

For a while they’ll be able to eat dead bodies and other decaying material but, if everything else has died, eventually there won’t be any food. And they’re not going to make much of a living.

The reality is that very little, if anything, will survive a major nuclear catastrophe, so in the longer term, it doesn’t matter really whether you’re a cockroach or not.

Nuclear explosions affect living things in a range of ways, from the impact of the initial blast to the ionizing radiation released into the air. All organisms are affected by ionizing radiation because it permanently damages DNA, the complex molecular chains that determine who we are and what we pass on to others. Ruff said:

It knocks the electrons off atoms and changes the chemistry of things.

Low and prolonged doses of ionizing radiation can lead to diseases like cancer and increase the risk of a range of chronic conditions, particularly cardiovascular disease. High doses can kill cells.

Even if an organism is less susceptible to radiation, it’s still part of an ecosystem that’s been damaged. Image via University of Melbourne/Getty Images.

Nuclear explosions are also especially damaging because radioactive substances can accumulate and recycle through the environment – in freshwater systems, the ocean and the earth.

They also concentrate up the food chain, so animals at the top of the food chain may contain levels of radioisotopes thousands of times higher than in their environment. So even if an organism is less susceptible initially, it’s still part of an ecosystem that has been damaged. Ruff said:

The evidence from a disaster like Chernobyl is that every organism, from insects to soil bacteria and fungi to birds to mammals, would experience effects in proportion to the degree of contamination.

In the past, scientists theorized that the more complex an organism, the more likely they were to be affected by nuclear radiation. So humans would fare worse and insects would do better.

But Ruff says that focusing on a single species misses the complexity of the biological environment and how we relate to one another, as well as interactions between multiple stresses at the same time.

There’s all sorts of factors we have to look at. There are environmental factors. There are chronic exposures, effects across generations and food shortages, for example.

The magnitude of effects of a nuclear explosion is far greater than what you might see in carefully controlled experiments and laboratory conditions.

So, everything points to the conclusion that no, cockroaches ultimately wouldn’t survive a nuclear apocalypse.

Bottom line: Would cockroaches survive a nuclear apocalypse better than other animal life and humans? Probably not.