Why plants don’t get sunburn

Plants produce their own chemical sunscreens that protect them from harmful ultraviolet light.

If you’ve ever experienced a painful sunburn, you know that ultraviolet light from the sun can be very damaging. So how do plants that bask in sunlight all day long avoid getting sunburn?

It turns out that plants can make their own sunscreen! These chemical sunscreens protect plants from harmful solar radiation while still allowing them to carry out photosynthesis, which is driven by sunlight. The natural sunscreens protect the plants much in the same way that sunscreens from the drugstore protect our skin from the dangerous effects of ultraviolet light exposures.

Back in 2011, a team of scientists reported in the journal Science that they had discovered a photoreceptor in plants that responds to ultraviolet (UV) light. Specifically, following exposure to UV-B light, which is the most harmful of the two forms of UV light (UV-A and UV-B) that reach Earth’s surface, plants start to modify the photoreceptor protein, named UVR8, inside their cells. This then triggers a variety of cellular responses such as the production of chemical sunscreens that absorb harmful UV-B radiation. 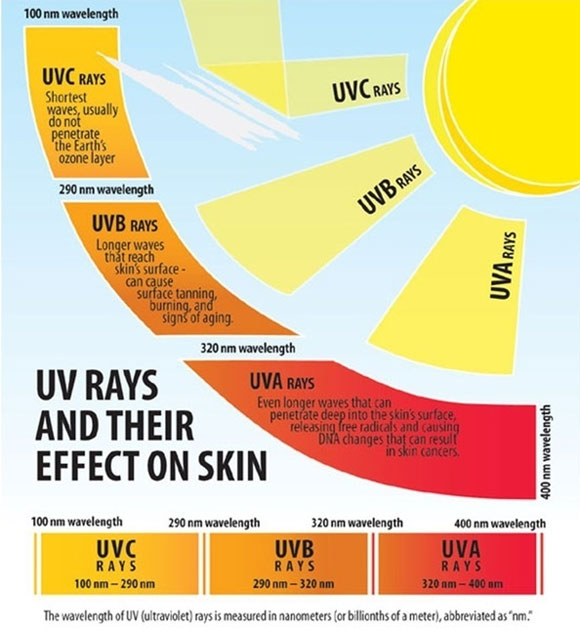 Diagram of different types of ultraviolet radiation from the sun. Image via Quora.

Professor Gareth Jenkins of the University of Glasgow, who was a co-author of the above study, commented on their findings. He said:

When a plant detects UV-B light this light stimulates the synthesis of sunscreen compounds that are deposited in the outer tissues and absorb UV-B, minimizing any harmful transmittance to cells below. This is exactly what our sun creams do. In addition, exposure to UV-B stimulates the production of enzymes that repair any damage to DNA. And lastly, genes are switched on that prevent oxidative damage to cells and help to maintain the photosynthetic machinery in the leaves.

Of course, plants can be damaged by the sun if their defenses are overwhelmed, but all in all, they excel at protecting themselves from UV light.

An explosion of research on plant sunscreens followed that initial discovery. For example, we now know that likely all plants, including single-celled green algae, produce these sunscreens. In fact, such sunscreens may have played an important evolutionary role in helping plants make the transition from the sea to land about 700 million years ago, as UV exposures are much more intense on the land than in the sea. Scientists have also shown that while some tropical species of higher plants produce high levels of sunscreens continuously, other plants can increase their production over the course of the day in response to changes in UV light similar to the tanning process.

Presently, scientists have begun searching for plant-based sunscreens that could serve as active ingredients in products intended for human use. There are already a few such products on the market in Europe, including one that contains a UV-A protective agent from marine red algae. Any alternative to current sunscreens should undergo a rigorous review to ensure that it protects equally well against UV exposures. Additionally, new products need to be tested for safety and be cost-effective to extract from plants or manufacture through other means. Scientists are even thinking about adding plant-based sunscreens to conventional sunscreens such as mineral oxides to see if these new compounds can increase the effectiveness of current products. Who knows, within another decade we could be slathering these plant-based compounds on our skin before heading outdoors.

Bottom line: Plants make their own chemical sunscreens that protect them from the harmful effects of ultraviolet light.