Why don’t evergreen trees change color and drop their leaves?

As temperatures drop, broad-leafed deciduous trees – think maples and oaks – withdraw the green chlorophyll from their leaves. Their leaves turn colors and fall. Evergreens solve the problem of winter in a different way. 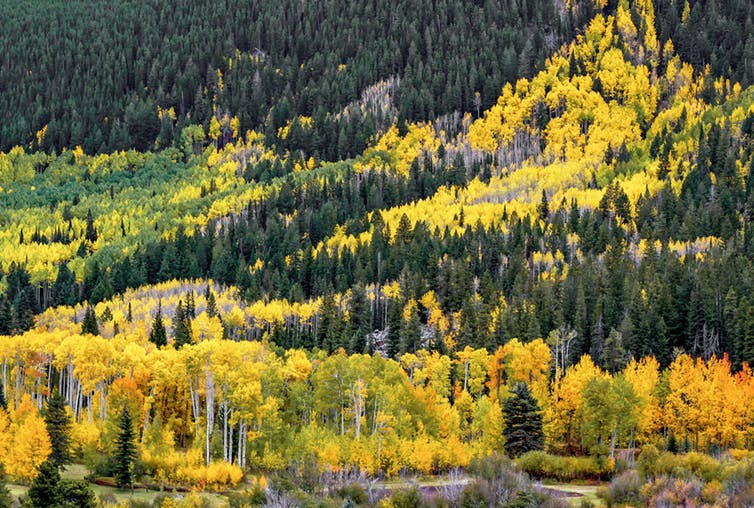 What’s happening with the trees that stay green? Image via BingHao/Shutterstock.com.

It’s autumn in the Northern Hemisphere – otherwise known as leaf-peeping season. Now is when people head outside to soak up the annual display of orange, red and yellow foliage painted across the landscape.

But mixed among those bright, colorful patches are some trees that stay steadfastly green. Why do evergreen conifers sit out this blazing seasonal spectacle?

Like so many other challenges, the problem of winter can be solved by trees in more than one way.

As temperatures begin to dip, broad-leafed temperate trees – think maples and oaks – withdraw the green chlorophyll from their leaves. That’s the pigment that absorbs sunlight to power photosynthesis. Trees store the hard-won minerals, chiefly nitrogen, they’ve invested in chlorophyll in their wood for reuse in a future growing season. Yellows and oranges and reds are left fleetingly visible before the leaves drop for winter. 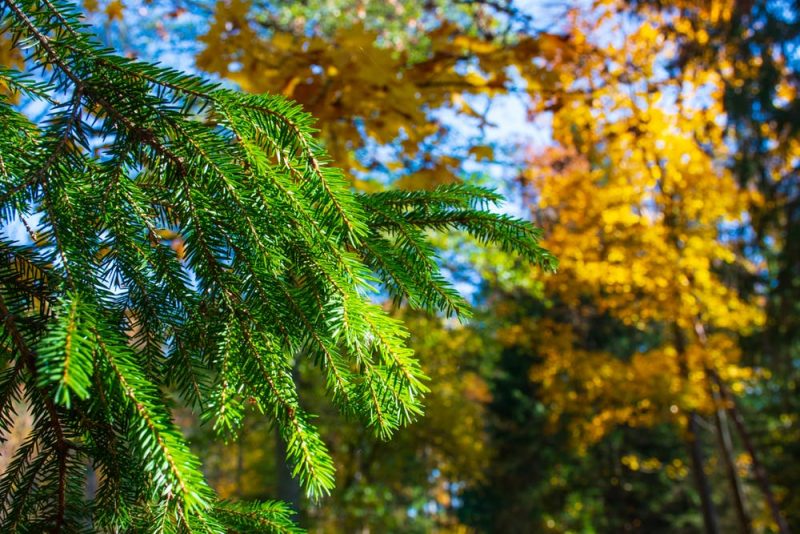 Green starts to stand out in the fall woods. Image via Michele Ursi/Shutterstock.com.

Return on investment in leaves

Staying evergreen is not about continuing to conduct photosynthesis throughout the winter. Cold temperatures affect conifers’ metabolism just as they do any other organism’s. In fact, on cold wintry days, evergreen conifers perform no more photosynthesis than their leafless neighbors.

The best way to understand the benefit of evergreenness is by considering the construction costs of leaves. Needles are really just modified leaves, after all. How do trees balance the energy it takes to grow a leaf with the energy that leaf produces via photosynthesis? In other words, how long do the leaves take to repay their construction costs and offer the tree a return on its investment?

Deciduous trees must recoup their investment in their leafy canopy in only a single growing season. In contrast, evergreen conifers, by hanging onto their needles, grant those needles multiple growing seasons to contribute to their tree’s balance sheets. That’s the real benefit to staying green.

Evergreens’ greater leaf longevity means they can survive in environments that just don’t work for their deciduous cousins. At higher latitudes and elevations, shorter and cooler growing seasons can limit photosynthetic activity. Drought can further interfere with photosynthesis. In these harsher conditions, a year may not be long enough for a leaf to produce enough energy to pay back its growth costs to the tree.

This may explain why evergreen conifers dominate mountaintops and the boreal forests that stretch across high latitudes in Alaska, Canada and Northern Europe. Deciduous broad-leafed trees largely drop out of such habitats – conditions mean they can’t balance their accounts with respect to investments in leaves and leaves’ photosynthetic return in a single season. 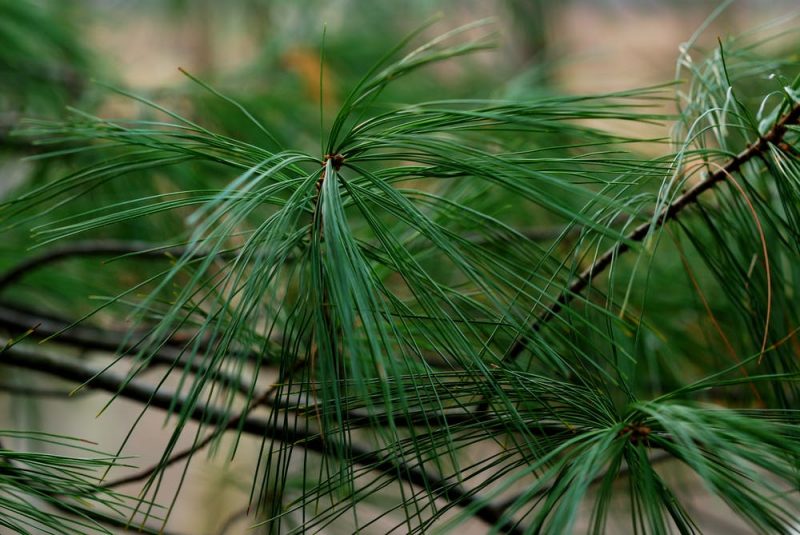 White pine needles need to withstand only one winter. Image via Candia Baxter/Shutterstock.com.

Evergreen needle longevity varies widely and maps onto the degree of growing season stress. Some temperate trees common to southern New England, such as white pine, retain needles for only two growing seasons. Any individual white pine needle overwinters only once, minimally meeting the definition of evergreen.

Some conifers, such as larch, do not achieve even that, instead shedding their entire crown of needles each autumn in a luminously golden display that can be a highlight of the autumn foliage splendor where they are found.

In contrast, bristlecone pines, inhabitants of high elevations in the arid Southwest, hang onto individual needles for almost 50 years. It may take nearly that long for bristlecone pine needles to achieve a photosynthetic return on the investment in their construction, given the growing-season stresses they confront. 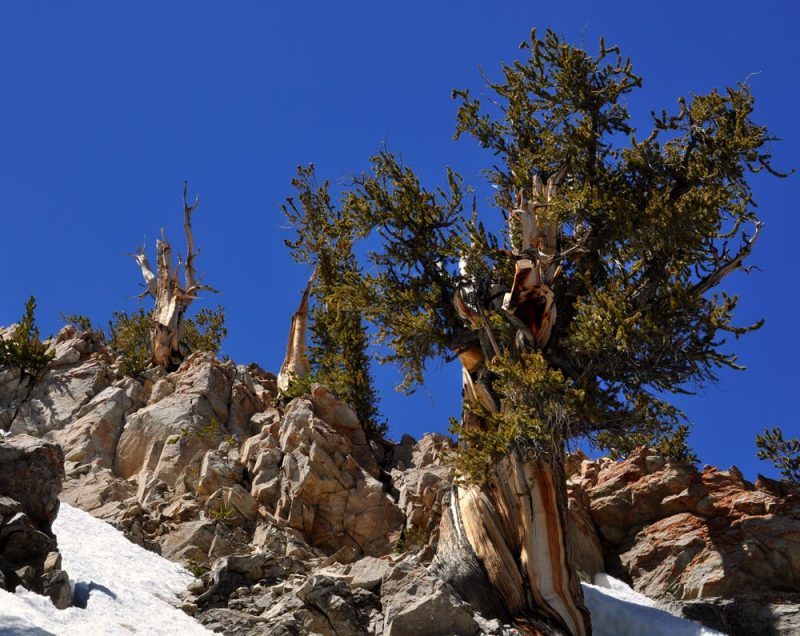 Adapting to deal with winter stresses

Overwintering is profoundly stressful for trees.

Subzero temperatures bring the risk of cellular freezing in evergreen needles – which would be lethal. To prevent freezing, evergreen conifers accumulate high concentrations of dissolved substances known as cryoprotectants that lower the freezing point of water in their cells and protect key cell structures, while not interfering with metabolism.

Cold, snow and blowing ice, along with the demands of longevity, lead evergreen conifers to invest their energy in the toughness of needles. Conifer needles vary in toughness; for instance, relatively short-lived white pine needles are more delicate. The fibrous materials that make needles more durable further deepen coniferous trees’ investment, extending the period required to achieve a return on needle construction costs.

Heavy loads of snow can result in broken branches, a prevailing risk of evergreenness. Thin, often drooping conifer needles catch less snow than the broad leaves of deciduous trees. Indeed, when deciduous trees lose branches to snowstorms, it is generally during storms on the edges of the snow season – in autumn or spring – not midwinter storms, when the crowns are leafless. If you’ve ever wondered why deciduous trees are taking so long in spring to leaf out, missing out on some excellent growing days as a result, keep in mind that trees don’t want to risk the damage that could result from a freak spring storm. 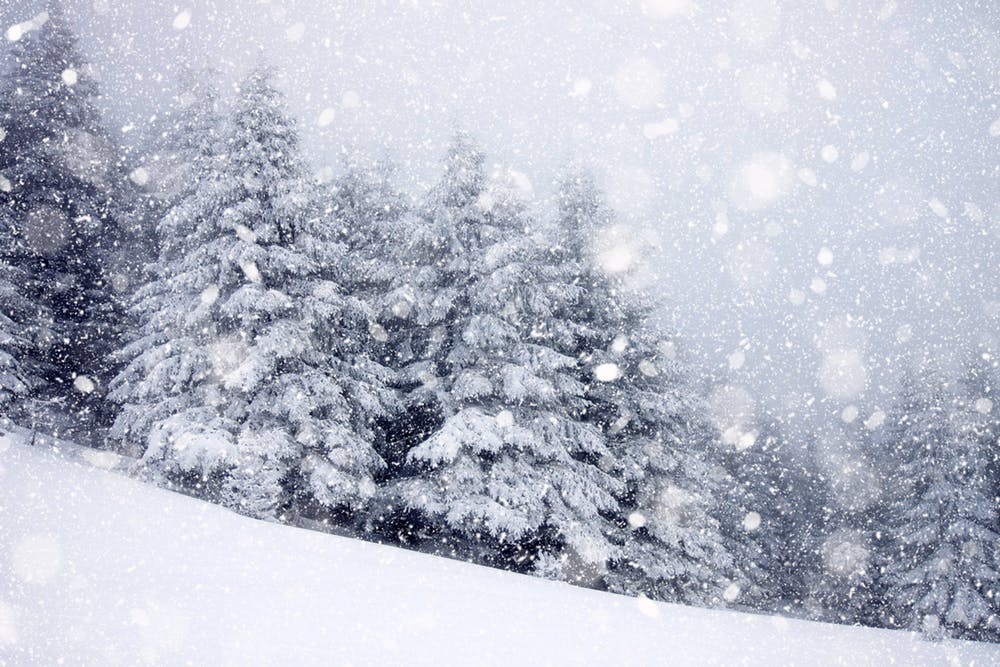 Evergreen branches are built to let snow slide off them so they don’t snap under the weight. Image via Melinda Nagy/Shutterstock.com

Conifer branch architecture is also adapted to shedding snow. Conifer branches generally sweep outwards and downwards from the trunk: Think of a Christmas fir. Not only that, conifer branches are generally more flexible than their counterparts on deciduous trees. Collecting heavy snow weighs down conifer branches until they reach an angle where it sloughs off.

No matter the species, at midlatitudes, where the snow flies in winter and growing seasons are generally mild and favorable, trees need strategies to make it through. Some recreate a crown of leaves each spring. Evergreens equip their needles and branches with features necessary to survive winter and thus live to see another spring – and, for some, many springs thereafter.

Bottom line: Why evergreen trees don’t change color or drop their leaves in the fall.