Why does the new year begin on January 1?

The date of New Year’s Day seems so fundamental that it’s almost as though nature ordained it. But New Year’s Day is a civil event. Its date isn’t precisely fixed by any natural seasonal marker. 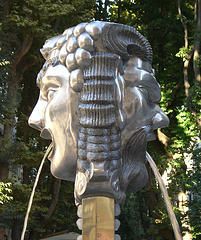 Our modern celebration of New Year’s Day stems from an ancient Roman custom, the feast of the Roman god Janus – god of doorways and beginnings. The name for the month of January also comes from Janus, who was depicted as having two faces. One face of Janus looked back into the past, and the other peered forward to the future.

For us in the Northern Hemisphere, early January is a logical time for new beginnings. At the December solstice in the Northern Hemisphere, we had the shortest day of the year. By early January, our days are obviously lengthening again. This return of longer hours of daylight had a profound effect on cultures that were tied to agricultural cycles. It has an emotional effect on people even in cities today.

The early calendar-makers didn’t know it, but today we know there is another bit of astronomical logic behind beginning the year on January 1. Earth is always closest to the sun in its yearly orbit around this time. This event is called Earth’s perihelion.

People didn’t always celebrate the new year on January 1. The earliest recording of a new year celebration is believed to have been in Mesopotamia, circa 2000 B.C. That celebration – and many other ancient celebrations of the new year following it – were celebrated around the time of the vernal equinox, around March 20. Meanwhile, the ancient Egyptians, Phoenicians, and Persians began their new year with the autumnal equinox around September 20. And the ancient Greeks celebrated on the winter solstice, around December 20.

By the Middle Ages, though, in many places the new year began in March. Around the 16th century, a movement developed to restore January 1 as New Year’s Day. In the New Style or Gregorian calendar, the New Year begins on the first of January.

Bottom line: There’s no astronomical reason to celebrate New Year’s Day on January 1. Instead, our modern New Year’s celebration stems from the ancient, two-faced, Roman god Janus – for whom the month of January is also named. One face of Janus looked back into the past, and the other peered forward to the future.

Thank you! Your submission has been received!
Oops! Something went wrong while submitting the form.
END_OF_DOCUMENT_TOKEN_TO_BE_REPLACED

Are 2 snowflakes ever the same?

Comets are icy balls of gas and dust

Moon near Saturn November 28 and 29